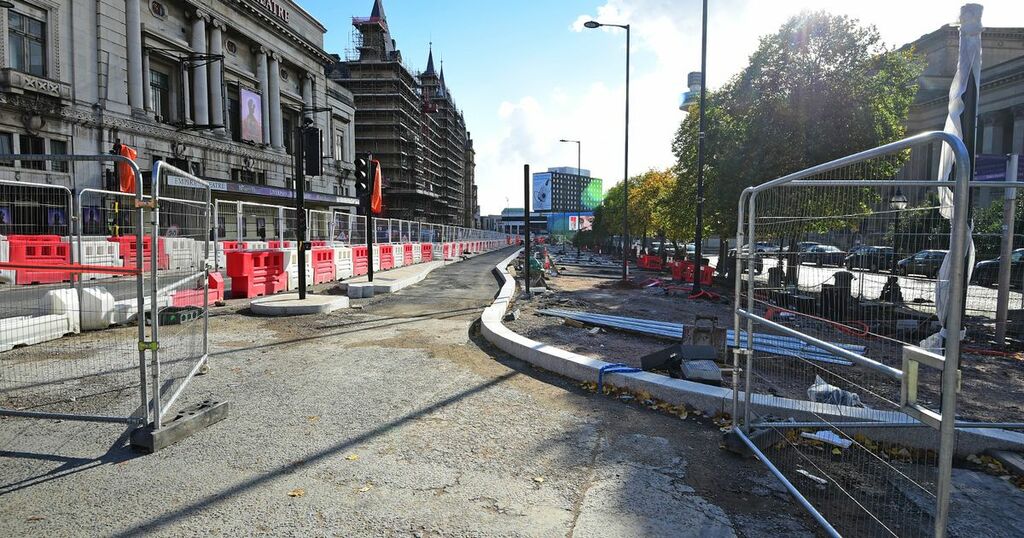 NMCN went into administration earlier this week, leaving the council’s major revamp of Lime Street, for which it was the lead contractor, in limbo.

A senior council officer has also revealed that mechanisms that could have helped protect the local authority financially were not placed in the original contracts signed with NMCN.

Comments from interim highways chief Karen Agbabiaka suggest there were worries for months about the state of the Lime Street works and that eventually steps were taken to insulate the council from the disruption.

That included a decision to remove council-owned materials bought for use on Lime Street so that they would be secure in the case of administration.

Despite having concerns about NMCN’s position from earlier in the year, interim highways chief Karen Agbabiaka said she was receiving assurances as late as two weeks ago that the Lime Street project was on time.

Ms Agbabiaka said: “When I joined Liverpool City Council in May I reached out to contractors across the city and had discussions with them individually.

“I have been keeping a watching eye on Lime Street and had some concerns about them [NMCN] so I implemented a number of things.

“A couple of those things were that the managing director came into the city, he came in a few times and I expressed my concerns around some of the items I was seeing and asked him to rectify those.

“I asked them to put measures in place which they had been doing.

“I also received weekly emails and confirmation that they were still healthy and that there were no issues and they were giving me regular updates in terms of the company and where they were.”

Ms Agbabiaka said she regularly checked on the situation on the ground at Lime Street and chased company bosses for updates when it appeared work was not taking place on the site.

She also asked for information on the company’s financial health from Companies House and said her own colleagues provided her with information that led her to take further action.

Speaking to the council’s climate change and environment select committee earlier this week, Ms Agabiaka said: “More importantly, my consultants who were supervising the project have been providing feedback and intelligence to myself.

“As a result we had a number of materials that we had purchased as a council ourselves and I made sure that our name was clearly on all those materials in case the company went into administration and that we put some of those materials in a secure location in the Hanover Street car park.

“There is not a lot we can do as a highways authority in terms of contractors when they are at that stage but what we have been doing is making sure that if it did happen, and it has, then we would be able to intervene quickly and resolve it and come up with a solution.”

There had still been hope within the council that NMCN would be able to complete the contract but the company collapsed into administration earlier this week.

Ms Agbabiaka said the news had been “really upsetting”, coming on the back of assurances that the work would be finished as planned.

She had even been involved recently in a three hour workshop with the company to figure out how to speed up the delayed Lime Street proposals.

Ms Agbabiaka said: “I am comfortable that we tried our best and there was nothing further we could do.

“Unfortunately when I got the phone call on Monday it was really upsetting.

“The fact that the managing director was in two weeks ago, that I had got an email at the end of September telling me that everything was on track.

“Unfortunately there was not a lot we could do then from a council point of view.”

It has also been revealed that contracts for the Lime Street work, signed under the previous council administration, did not contain key tools that Ms Agbabiaka said could have protected the local authority.

She said the contracts “didn’t have performance bonds, which we should have had”, while cabinet member Dan Barrington referred to the situation within the highways team when he took over as cabinet member in May as “a mess”.

Answering a question from councillor Alison Clark, Ms Agbabiaka said the council had no way to get out of the contract before NMCN's collapse without significant financial penalties.

Highways is one area of the council currently being overhauled with the supervision of independent commissioners after the way it used to operate was slammed in a report by government inspector Max Caller.

The Lime Street plans, which had proved controversial due to their effect on the bus network, will now be reviewed while the council awaits the outcome of the administration process for NMCN.

A number of other roadwork schemes across the country have similarly been left in limbo after the company went into administration on Monday.