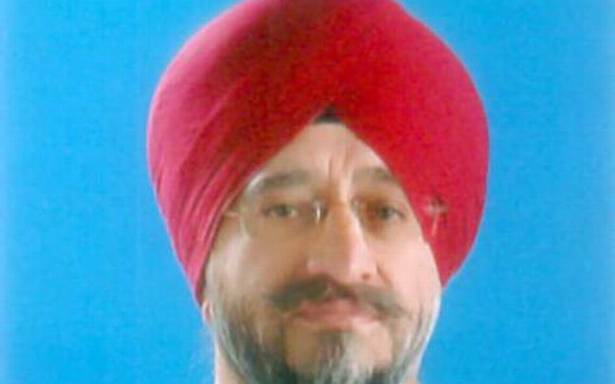 The day his granddaughter was born, Jammu & Kashmir leader Trilochan Singh Wazir (69) was murdered at a residence in west Delhi’s Basai Darapur on September 2. Six days later, his highly decomposed body was found in the same flat on Thursday morning.

National Conference leader Mr. Wazir, who was a former member of the J&K Legislative Council, chairman of J&K’s Gurudwara Prabandhak Committee, and president of a transport union for the last three decades, had come to Delhi on September 2 from his residence in Jammu’s Gandhi Nagar.

“His granddaughter was born on September 2 in Canada. He was to take the flight at 2 a.m. on September 3. That’s why he had come to Delhi. He was to stay with his family in Canada for a while,” said Jameel Chaudhary, an NC member who was associated with Mr. Singh for over 15 years.

Mr. Chaudhary said that in Basai Darapur here, Mr. Wazir he had been staying with a man identified as Harpreet Singh, a prime suspect for the police. “This man introduced himself as a journalist to Mr. Wazir over a year ago. He said he ran a newspaper and was publishing 2 lakh copies a day, and a website. He convinced Mr. Wazir that he would publish stories on him and Mr. Wazir, being a political figure, believed him,” Mr. Chaudhary said.

Over the last one year, the suspect met Mr. Wazir many times. “Harpreet Singh gained his confidence to the point that Mr. Wazir would go anywhere this man would ask, and a man of his stature wouldn’t otherwise,” the friend said.

When Mr. Wazir told Mr. Harpreet that he was coming to Delhi as he had to fly to Canada, the suspect allegedly convinced Mr. Wazir to have dinner with him and said that he [Mr. Harpreet] would then drop him [Mr. Wazir] to the airport.

Mr. Chaudhary said that he had spoken to Mr. Wazir at 10.30 p.m. on September 2. “He told me that he had a flight at 2 a.m. and would leave soon. I asked him where he was staying and he said he was staying with the journalist. He said that Harpreet was really forcing him [Mr. Wazir] to stay with him [Mr. Harpreet], which is why he [Mr. Wazir] agreed. But he was sounding disoriented,” he said, adding that Mr. Wazir video-called his wife thereafter, with Mr. Harpreet sitting next to him.

A few hours later, Mr. Harpreet allegedly video-called Mr. Wazir’s son from the airport and said he [Mr. Harpreet] had dropped him [Mr. Wazir] and that he would reach Canada in three-four days as the flight was via Germany. Mr. Harpreet is said to have kept Mr. Wazir’s phone switched on till Wednesday morning.

“He attended calls and dodged people. But on Wednesday morning, he told a friend of Mr. Wazir’s that two people had come from Jammu and shot him [Mr. Wazir]. He asked the friend to take his [Mr. Wazir’s] body. He then switched off the phone,” Mr. Chaudhary said, adding that he himself was among those who constantly called on Mr. Wazir’s number to ask for updates from Mr. Harpreet.

Meanwhile, the J&K police was also informed that Mr. Wazir was missing and they tried to locate him. The authorities also checked if he had boarded the flight to Canada but it turned out that he hadn’t. On Wednesday morning, senior J&K police officers were informed of his death, as conveyed by Mr. Harpreet, after which they contacted the Delhi police, who started looking for the body.

Deputy Commissioner of Police (West) Urvija Goel said they had received a call on Thursday morning regarding a foul smell emanating from a house in Basai Darapur. When the police reached the spot and broke open the door, a Mr. Wazir was found dead on the floor, Ms. Goel said.

“There are two suspects, including Harpreet and one Harmeet Singh, resident of Jammu, as told by the family. Teams are working to apprehend them,” she said, adding that a murder case had been registered at the Moti Nagar police station.

Mr. Wazir’s brother and retired Senior Superintendent of Police (Jammu) Bhupinder Singh was present at the spot with his associates and Mr. Wazir’s family was due to arrive from Canada on Thursday night. “This looks like an outcome of political rivalry. We hope the police will investigate the case with due diligence,” Mr. Bhupinder Singh said.

The case has been transferred to the Crime Branch for further investigation.