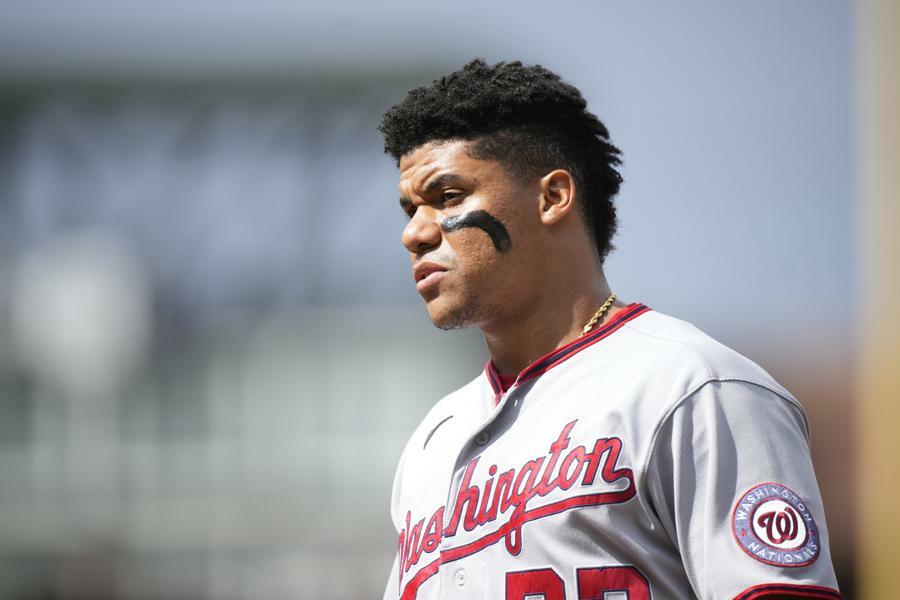 There weren’t any MLB playoff games yesterday, so today is MVP Award day in this space, with the National League race spotlighted here. (You can see the AL piece here.) Last week, we took a look at the NL Cy Young chase, with the nod given to the Brewers’ Corbin Burnes, in a near dead-heat with the Phillies’ Zack Wheeler.

For those of you unfamiliar with the analytical evaluation methods used here, a little review. For each player, I calculate the production level he “should have” generated based on the exit speed/launch angle of each batted ball. This results in Adjusted Contact Score, with 100 equal to league average, the higher the number the better. Players are assessed penalties for excessive grounder pulling, so it isn’t quite all about batted ball authority.

Yes, I am comparing players to average performance level, not replacement level. This is a more appropriate way to measure excellence, in my opinion. I use it to measure career and individual season performance of the game’s very best, and have found it to be a solid barometer.

In each league, I will first highlight one player who didn’t rank at or near the top according to my method, but who deserves to place well in the actual MVP voting. In the NL, that guy is Dodgers’ SS/2B Trea Turner. He was actually the NL leader in Fangraphs’ WAR at 6.9. While my method admittedly might underweight his speed, I am confident that other measures overweight it by an even greater margin. Turner is an average to slightly above average ball-striker whose speed drives his entire game. He is a very, very good player - I simply don’t see him providing the reliable long-term bat impact that these other players will. Sure, I would respect him being voted ahead of the player listed at #5 below, but that’s as far as I would go. Going to be true to my numbers here.

My highest ranking Dodger. Truly a product of his era, Muncy is what you might call a launch angle guy, but a darned good one. Like many such players, he is an extreme ground ball puller, who deserves every bit of his .098 AVG-.098 SLG line on the ground. His uppercut swing results in relatively weakly hit grounders (82.6 mph average). That said, he has a manageable pop up rate, crushes his fly balls and liners to the tune of over and very close to two standard deviations above average, and is a surprisingly versatile defender who more than holds his own versus lefthanded pitching. Like Justin Turner and Chris Taylor, Muncy represents the type of reclamation project who transformed from a complementary piece into a legitimate star on the Dodgers’ watch.

Even in this company, Tatis’ batted ball authority stands out. His Adjusted Fly Ball Contact Score of 315 was second only to Shohei Ohtani’s 343, and his average fly ball authority of 98.4 mph actually nosed out the Angel great. His average liner authority of 101.2 mph paced a very strong group of MVP hopefuls in both leagues. Weaknesses? His K rate sharply increased this season, he has an extreme pull tendency on the ground, and that darned shoulder situation of his is pretty scary. Plus, his long-term defensive home is in flux. All of that said, this is one very special offensive player, and he doesn’t turn 23 until January 2. If I had to pick an active future 60-homer player in either league, this would be the man.

As the only player in my top five to participate in the playoffs - and he didn’t just participate, he had a signature moment, clinching the NLDS series with a homer off of elite Brewer closer Josh Hader - he just might have a leg up in the actual MVP race. That said, his 4.5 Fangraphs’ WAR is the lowest figure of any of my top NL or AL contenders. Why do his actual numbers fall so far short of his “Tru” line above? Every year, Freeman is a line drive machine, and 2021 was no exception. This time around, however, he batted only .594 AVG-.722 SLG on them, for an 81 Unadjusted Line Drive Contact Score. His adjusted mark was much higher at 111. That plus a more modest underperformance in the air (124 Unadjusted vs. 146 Adjusted Fly Ball Contact Score) held his actual numbers down. And it wasn’t due to over-shifting either, as Freeman sprays his liners and grounders to all fields. He is the least overwhelming ball-striker of this group of MVP contenders, so his decline could evoke 2018-19 Joey Votto.

I examined what I then called a stealth MVP candidacy here in early August. There’s nothing stealthy about it now - he’s right in the thick of this thing. It can be argued that Harper is no longer on the upswing of his career - I don’t necessarily see him taking his game to another level. He does all of really good stuff that great hitters do without a significant number of negatives. He crushes the ball in the air (258 Adjusted Fly Ball Contact Score) and on the line. He draws plenty of walks, with a manageable strikeout rate for a slugger. He hits enough fly balls, but doesn’t have anything close to a pop up tendency. On the negative side, he doesn’t hit his grounders very hard (82.6 mph on average) due to his uppercut stroke, and does have a pronounced grounder-pulling tendency. When you get down to it, he and the #1 contender below aren’t all that different in total value - today. The other guy, as we shall see, has an upside that is almost incomprehensible.

A couple quick general comments here. First, there are no defensive aces near the top of the NL MVP race. Only Tatis among the group adds significant baserunning value. This is all about the bat. And this is the best bat. And it’s going to get so much better, if you can imagine that. Start with the thunder. His overall 93.0 mph average exit speed was 2nd only to Tatis’ 93.7. His 256 Adjusted Fly Ball Contact Score is almost dead even with Harper’s, with both trailing Tatis by a larger margin. Soto’s Adjusted Liner (131) and Grounder (134) Contact Scores are also exceptional. His grounder authority spiked this season compared to prior years. His overall 148 Adjusted Contact Score ranks only 4th among these five players, however, narrowly ahead of Muncy. What gives? Well, Soto hits a ton of grounders presently, and his 2021 average launch angle of 5.8 degrees is by far the lowest among my top MVP candidates in both leagues (Vladimir Guerrero Jr. is next lowest at 9.4 degrees.) There is so much upside potential here when he learns to elevate the baseball a bit more. Guerrero took off this season by raising his average launch angle just a few points. What kind of numbers could Soto put up if he did the same next year? Oh, and the elephant in the room is the Ted Williams-esque K/BB profile. And before you say Ted never struck out this much, well he sure did relative to the league. In an era full of youthful potential all-time greats, Soto is the standout. There is no telling how much damage he can inflict upon the league at his peak.