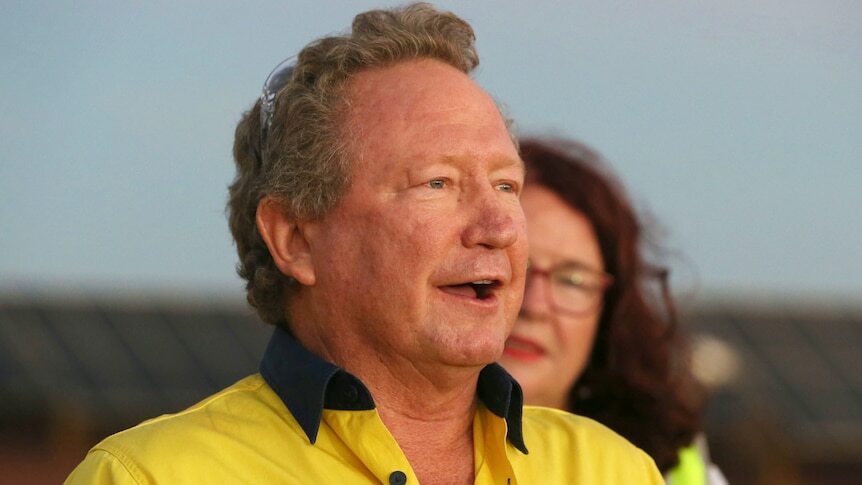 Frustrated mining magnate Andrew "Twiggy" Forrest has lashed out at Nationals politicians who he says are "capable of hearing the facts" on the coal industry, but have chosen to ignore them to chase votes.

Mr Forrest, the chair of Fortescue Metals, on Wednesday stood beside the New South Wales government as it announced a $3 billion green hydrogen plan backed by the billionaire.

He said the production of green hydrogen fuel using renewable energy could provide jobs for people currently working in coal, oil and gas, as the country moves away from fossil fuels.

"We need all those skills from coal miners, from oil and gas ... they are the exact careers we need right now to build our green hydrogen future," Mr Forrest told the ABC.

But in conversations with federal Nationals leader Barnaby Joyce and deputy leader Bridget McKenzie soon after yesterday's announcement, Mr Forrest expressed frustration with the pair, and accused some Nationals politicians of being more focused on their own jobs.

"You might crack a few more votes at the coming election, but after this coming election you will be seen for what you are: just a fearmongerer trying to save your political job, not the jobs of every regional Australian."

The federal government is currently considering whether to commit to a target of net zero carbon emissions by 2050, something most of the developed world has already adopted.

Prime Minister Scott Morrison hopes to have agreement ahead of next month's international climate conference in Glasgow, but his Coalition partners in the Nationals have been reluctant.

Mr Morrison has said the government hopes to reach carbon neutrality "preferably" by 2050 through a combination of emerging technologies and without taxation.

But Mr Forrest said even if the government committed to net zero, the plan to use "clean" hydrogen and carbon capture technology would not work.

"Angus [Taylor] and I have had a chat, and I have agreed to not say, 'Carbon capture and storage fails 19 out of 20 times,'" Mr Forrest told the ABC.

Mr Forrest said the government and the country's biggest emitters should be leading the transition away from coal.

The ABC has contacted Angus Taylor and Bridget McKenzie for comment.