Nashville Fiddler Jenee Fleenor Is Definitely On A Roll 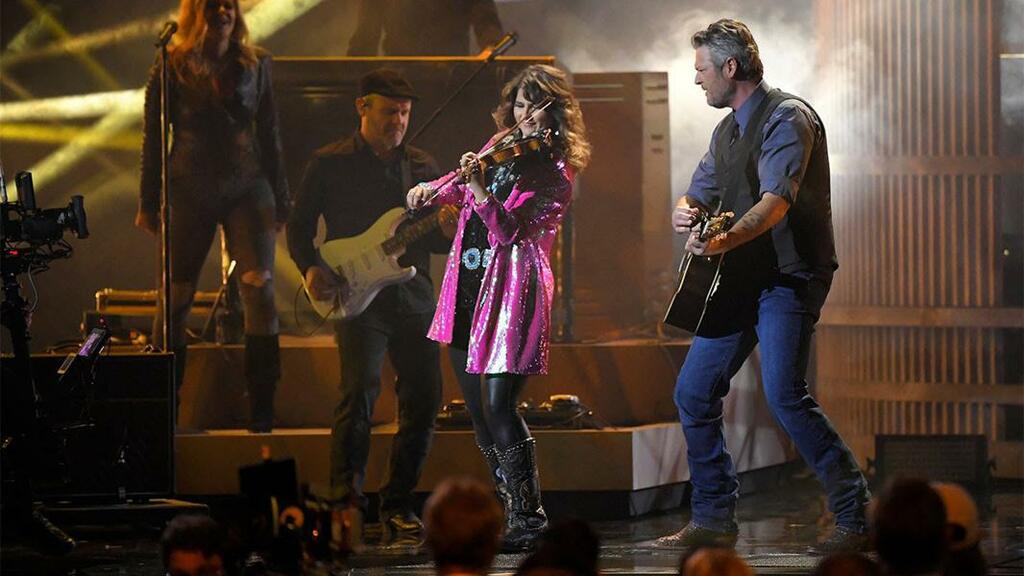 Jenee Fleenor is one of the busiest fiddler players in Nashville. When she’s not touring with Blake Shelton (she’s been his fiddle player for the past eight years), she’s usually in the recording studio doing session work for a host of other artists. She’s also a singer/songwriter, and multi-instrumentalist who often sings on stage with friends and fellow musicians at The Station Inn in Nashville.

“I always have to be doing something creative,” she says, “but of course, my first love is fiddle playing.”

It was her love of the fiddle that brought the Springdale, Arkansas-native to Nashville right after high school. She dreamed of becoming a session player and playing on country records like the ones she heard on the radio.

In the two decades since, Fleenor has fulfilled that dream, and accomplished even much more. She’s toured with artists like Terri Clark, Martina McBride, before becoming a member of Shelton’s band.  She’s played on records for Shelton, Dolly Parton, Reba McEntire, Trisha Yearwood, Martina McBride, Jon Pardi, Trace Adkins, Joe Nichols, and many others.

Her style, approach, and mastery of the instrument has brought her both attention and respect from fellow musicians, artists, and others in the music industry. She’s been described as the Eddie Van Halen of the fiddle for her ability to add it to just about any type of music, and make it shine.

“Brent Mason called me that,” she says with a laugh, referring to the Van Halen comment. (Mason is a GRAMMY-winning guitarist and one of the most recorded guitar players in history.) “Brent is one of my all-time heroes. It floors me that he even knows my name.”

But the proof is in the music. Some of Fleenor’s earliest sessions were with Jon Pardi, and she remembers when people first began noticing her work.

“Jon was instrumental in my career. I had my first No. 1 with him,” she says. “And once people heard my fiddle  playing, they were like, we want that thing you do on Jon Pardi’s records. It was so flattering.”

“Rob played on Garth Brooks records and Brooks and Dunn, and many others,” she explains. “And I remember him saying he was just trying to mimic the electric guitar. I love learning crazy rock and roll licks, then seeing how they work on the fiddle.”

One of her best opportunities to do that came several years ago when she toured with Aerosmith’s Steven Tyler after he recorded a country album.

“I’m sure people showed up to some of those concerts and were like, ‘Oh God, a fiddle!” She laughs, then goes on to say, “But, I learned those Joe Perry lines. (Perry is Aerosmith’s lead guitarist.) That’s why I love session work, because one day I’ll be doing a bluegrass record and the next day I’m doing rock and roll. I love being thrown into different scenarios.”

She’s well-recognized for both her creativity and work ethic. For the past two years she’s been named CMA “Musician of the Year,” and she learned last week, she’s been nominated again for 2021. (Winners will be announced on November 10th.)

When she won in 2019, it was especially meaningful because she became the first woman to ever receive the award.

“You know, I never really thought about being the first woman. Honestly, being a session musician was just always what I wanted. It was my goal in life, so I went after it.”

She was fortunate that her parents, and others around her, always gave her unconditional support.

“It kind of makes me emotional to think there are women out there that it’s been harder on, to go after their dreams. I get messages on my social media from women and little girls who say I’ve inspired them to play. I’m just thankful to God that I can be the one carrying this torch and breaking through these ceilings. And I do hope it encourages some little girls out there to for their dreams.”

Fleenor was just three years old when she first started learning to play the fiddle. She began with the Suzuki method and continued with classical lessons throughout her childhood. But early on, she found herself influenced by her father’s country music records.

“I heard these old country records with the fiddle on them and when I was about five years old, I learned to play “Faded Love” by ear. I remember standing on a cedar chest and playing it for my mom and dad.”

Once her parents recognized she had an “ear,” for music, they started taking her to lessons with local fiddle players, and entering her in fiddle contests.

She arrived in Music City at the age of 18, and enrolled at Belmont University. About a month later, she got a job as a fiddle player with singer/songwriter, Larry Cordle. She played with his band on weekends while still going to school during the week, but eventually dropped out to pursue music full-time.

After four or five years of playing in various bands, and spending a lot of time on the road as a musician, she decided to try something new. She began learning to write songs.

“From working with Larry, I knew the importance of a good song. And my wheels started turning as I realized this town is built on great songs.”

With help from Cordle, and other songwriting friends, she learned the craft and soon found she had a talent for it. She’s since has since had songs cut by Blake Shelton, Kathy Mattea, Del McCoury, and others. And while it was never the intended goal, it turns out songwriting was what helped her break into session work.

“I kept asking my songwriter friends if they’d write with me. And later some of these songwriters realized I played fiddle, and sometimes they’d decide they wanted fiddle on a song, and that kind of segued into session work.”

Back then, however, when it came to session work - her instrument wasn’t as in-demand as it is now. Throughout the history of country music, the fiddle, like the steel guitar, ebbs and flows in popularity in country music. Fleenor is excited to say, in recent years, it’s made a comeback.

“Ten years ago, I’d be doing a session and they’d say, ‘we want the fiddle, but we really don’t want to hear it. We just want long notes and to have it kind of float it in the background.’ Now, they want fiddle intros, and I actually get to do a solo! I think people are recognizing how good 90s country was. There was a lot of fiddle on those records.”

And as much as she enjoys session work, she still loves performing live. She’ll be doing a lot of that in the weeks ahead while touring with Blake Shelton.

“Blake is amazing to work with. What you see is what you get with that guy, and I just love him so much.”

She says Shelton, who is well-known for helping promote the careers of others, has certainly done that for her.

“In my case, after I won the first CMA award, he thought up this solo section that we do. It gives me a big feature during our show and of course I ham it up. You’ll have to come to one of our shows to see it.”

Playing with Shelton has also opened doors for her on The Voice.

“I guess I’ve been doing The Voice for as long as I’ve been in Blake’s band. I’ve played with so many of my heroes on that show, like Dolly, Alison Krauss, and Rascal Flatts. It’s been fun doing that, and getting to play and record with the contestants. And just getting to see how the show works, behind the scenes. I hope they do a documentary one day on how hard those people work.”

Given all she’s doing as a musician, she doesn’t have a lot of time to devote to do much else, but Fleenor is also an accomplished singer. She recorded an album earlier in her career, and a couple of years ago released two singles. One is called “Fiddle and Steel,” and the other “Good Ol Girls.” She hopes to do more of that down the road.

“For me, it’s just finding time between all of my other stuff. I do love to sing. I guess it’s just another one of those fun tools in my toolbox.”

For now, as always, the fiddle remains her top priority.

“I just love it so much. What’s that saying? If you do what you love you’ll never work a day in your life. That’s exactly the way I feel.”