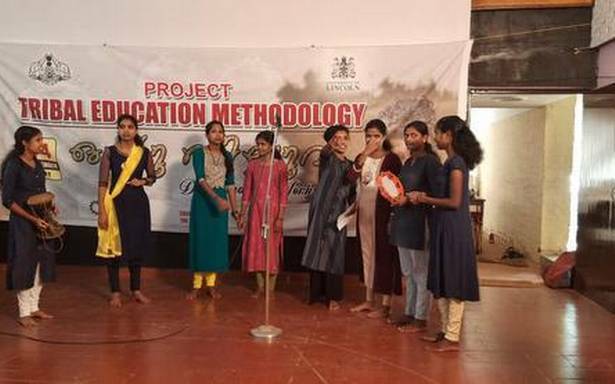 Cheruvayal Raman has been feted for his contributions to conservation of traditional varieties of rice. A tribal farmer near Mananthavady in Wayanad district, the septuagenarian has succeeded in protecting genetic diversity of rice by conserving nearly 50 varieties.

However, not many know that he was not even 10 when he started helping his uncle, also named Raman, in the fields and understanding the five varieties of rice they had been cultivating traditionally.

Fascinating glimpses into the life of Cheruvayal Raman were provided by Prajitha C., a young woman of Thondernad panchayat, Wayanad, at a dissemination workshop titled ‘Ontu Nilluva (‘to stay together’ in the Adiya tribal language) held in the capital city on Tuesday.

Ms. Prajitha is one among the six young women from the Paniya, Adiya and Kattunayika tribal communities who presented the oral history of some of the enterprising tribespeople of Wayanad. In all, 20 young tribal women have documented 13 tribespeople by interacting with them at length as part of a leadership programme.

Those documented include women who started a protest against mushrooming of resorts in Wayanad, who took part in the struggle for land, who was witness to the Muthanga protest, engaged in an agitation seeking higher wages, one who has helped deliver generations of babies and so on.

‘Ontu Nilluva’ is one of the activities taken up as part of the Tribal Education Methodology project, an innovative pilot research project aimed at making an intervention in mainstream education that the State government has undertaken in partnership with the University of Lincoln, the U.K.

Theatre and art were some of the tools used to integrate tribal culture with mainstream school curriculum as part of the project, launched in September 2019.

Sreenath Nair of the University of Lincoln, the principal investigator of the project, says it is imperative that school curriculum includes space for tribal art and culture and expression of their collective self so that they remain rooted even as they become receptive to modern education.

Mr. Nair says discussions are on with the government for continuing the project beyond the pilot. Embodied knowledge creation and dissemination is what interests him.

An exhibition of artworks by the tribal youth and presentation of indigenous cultural forms and theatre presentation were held as part of Ontu Nilluva.

The Tribal Education Methodology project is being implemented through the Kerala Development and Innovation Strategic Council with collaborative funding from the Art and Humanities Research Council of the U.K. and Global Challenges Research Fund.