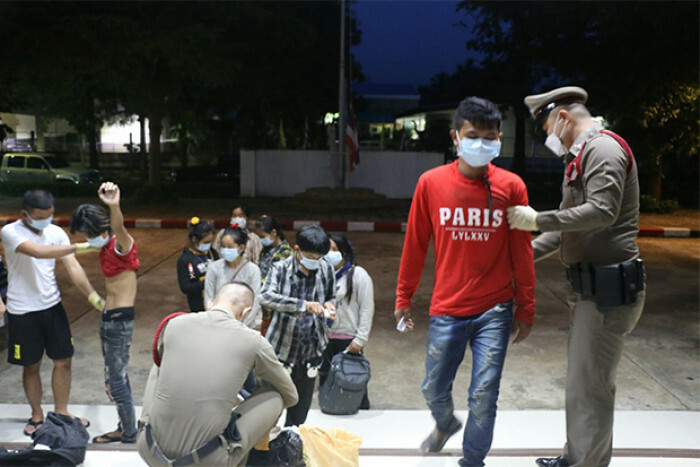 KANCHANABURI: A combined military and police unit arrested eight Myanmar nationals for illegal entry and a Thai man for providing assistance to illegal border crossers in the small hours on Sunday, police said.

They were arrested at about 3.30am when a white Nissan sedan was stopped at the police checkpoint at the Song Kalia T-junction at Moo 3 village in tambon Nong Lu of Sangkhla Buri district.

The Myanmar nationals -- three men and five women -- said they had travelled from Phyatonezu town and crossed the border into Sangkhla Buri district. They said they had paid 25,000-28,000 baht each to job agents in Phyatonezu for jobs in Thailand's Samut Sakhon province.

The five were charged with illegal entry and violating the provincial communicable disease committee's order banning travel of migrant workers.

Lamun Khuntha, 59, the Thai driver of the car, said he had been paid 2,400 baht by a Thai man to transport the Myanmar job seekers from the old Son Kalia air strip to a waiting area in Kanchanaburi. He was charged with providing assistance to illegal border crossers.

The job seekers and Mr Lamun were handed over to Sangkhla Buri police for legal proceedings.