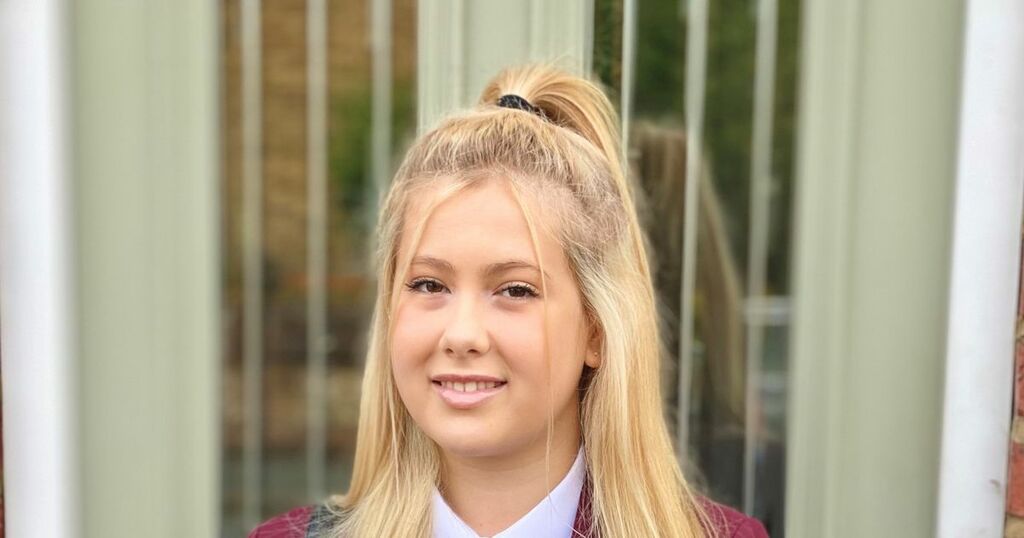 A proud mum has taken an identical picture of her daughter on every first day of school for the last 10 years.

Dagny Barnett, 53, has a snap of daughter Chloë, 14, in the same stance outside her home since she started nursery aged four.

And the mum says she is very particular about how her now-teenage daughter must pose for the annual record.

And this new school term, when Chloë will work towards her GCSEs as a Year 10 pupil - was no exception for the family tradition.

Dagny takes special pride in her "precious" daughter, who she had after a seven-year ordeal that included seven rounds of IVF.

She now has a catalogue of pictures documenting Chloë's transformation from a chubby-cheeked youngster to a grown-up teen.

Dagny said: "It's just nice to see the difference each year of how much she's changed.

"The hairstyle and other bits have all changed over the years.

"She's gone from a very chubby-cheeked nursery child to a grown-up girl."

Dagny, a stay-at-home mum, has strict rules for how Chloë must pose - side-on, smiling and in school uniform - outside their house near Redhill, Surrey.

The first batch of pictures shows Chloë from the age of four to 11 - from nursery to Year 6 - while the second batch in her red blazer documents her time at secondary school.

Dagny said: "Chloë loves the pictures now she's 14 and doesn't have to go through the stress of mummy screaming 'put your leg forward' or 'put your leg in the right place!'.

"Seeing the old pictures is such a lovely memory of her junior school years."

Dagny's photos come just days after Brit parents sent their little ones back into the world to attend school across the UK.

One mum and dad explained the extra effort needed to get their quadruplet children dressed in new uniforms and ready for school.

To help teachers identify the cute kids, their mum has given them personalised backpacks, and fitted different coloured hair bows to tie up their matching blond hair.

Carla Crozier, 39, had mapped out a busy morning routine with military precision so the four and big sister Darcie, seven, made it to the school gates for 8.30am.

But all her plans had to go on hold because Isla, Milla, Alyse and Darcie tested positive for Covid-19.

It is such a shame for the excited quads, who have been asking Carla all summer when they will start big school.

Meanwhile, one young lad was not looking forward to his first day, and his mum used a clever hack to make him feel more comfortable.

The trick simply requires sewing two small crosses on the cuff of a school jumper.

Kat Gurnett, 35, posted the hack on her Instagram account last week after discovering it online and realising it would help her five-year-old son Davey feel more relaxed when he began his first week in Year 1.

The two crosses act as 'kisses', and Kat told her son he could kiss or rub the little Xs if he started to miss his family because it would “send a little kiss back home”.