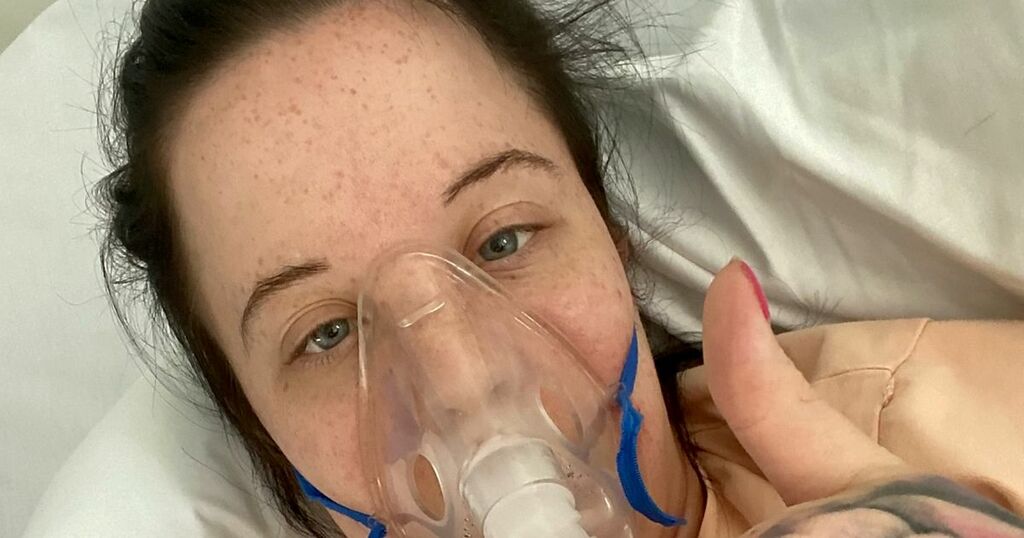 A mum still plans to let her daughter get vaccinated despite fighting for her life after experiencing an allergic reaction to the Covid vaccine.

Mum-of-one Kirsty Hext, 26, was rushed to hospital when she began struggling to breathe shortly after having the second dose of the Pfizer jab.

She's claimed that the reaction was due to a severe unknown allergy to one of the vaccine's ingredients and has since experienced at least 14 anaphylactic shocks.

Three million children aged between 12 and 15 will be able to get their first shot of the coronavirus vaccine from next week.

Kirsty has said she still supports her daughter Harper-Roses, two, receiving the vaccine when she is eligible and she would encourage other parents to take the same stance.

Senior care assistant Kirsty said: "I believe the vaccine is helping people, even after what I went through, so that's why I'm letting Harper-Rose have the vaccine.

"Being a parent, you just want to protect your child.

"I still feel quite nervous about it after what happened to me, but obviously there are side effects to everything, isn't there?

"I could give her paracetamol or she could go for her normal jabs and she could have side effects.

"If it can potentially help her from becoming poorly, or if she has covid-19 and it stops her from spreading it to somebody else, then why should I stop her from having it?"

Despite never having had an allergic reaction before in her life, Kirsty was left fighting for her life in ICU after struggling to breathe minutes after receiving the second dose of the Pfizer jab on April 28.

Her lips and tongue would swell to the point of bleeding and she ended up having two seizures when shocks left her brain starved of oxygen.

The young mum feared she’d never see her two-year-old daughter Harper-Rose again after she was admitted to ICU.

Kirsty, from Havant, Hampshire, said: "The anaphylactic shocks were terrifying - my face and and airways started to swell up and I couldn't breathe properly - and each one seemed scarier than the one before.

"After a couple of shocks even caused me to have seizures, I honestly thought I'd die in intensive care, and I'd never see my two-year-old daughter again.

"I truly believed my body was giving up - I thought I was going to die in hospital and I'd never watch my daughter grow up.

"I even had tearful a phone call with my sister where I asked her 'if I don't wake up, can you raise my daughter?'

"I couldn't believe it when doctors first said my condition was because I was allergic to the Pfizer jab - I didn't even know it was possible, but it has nearly killed me.

"Even after so many shocks now, it's very scary not knowing when the next one might come - and I can't wait for this to be over."

The UK's chief medical officers have now recommended a single Pfizer for all children aged 12 to 15.

Whilst many parents have been against administering the vaccine to their kids, Kirsty is in support of her two-and-a-half year old daughter, Harper-Rose, receiving the jab when she can.

She said: "It took me a little while to come round to Harper-Rose having the vaccine. It's your child - it's a bit different when they're an adult and they can make their own decisions.

"With there being a lot of side effects and what has happened to other people, I did take a bit of time to consider it.

"I've had a few concerns because of what I went through, but I think that's normal, isn't it? Anything could potentially have a side effect.

"Even after everything I've been through, I still think everyone should get their jab. Just because I had a bad reaction, doesn't mean everyone else will too - vaccinations save lives.

"This has been a truly terrifying experience - one I never even thought was possible - but it's still so important people get their jabs.

"Even though I have nearly died several times since getting vaccinated, I work in the care sector myself and I know how important it is.

"I want people to remember that reactions like mine are very rare - and just because I have had a bad reaction, doesn't mean everyone else will too."