MUMBAI: Soon after a forgettable IPL season came to an end with yet another defeat, there was a note of optimism in Mahendra Singh Dhoni's voice's as he looked forward to Chennai Super Kings' youngsters maturing into world class players in the coming years.

Four-time champions CSK finished the season in ninth place, having suffered 10 defeats while managing to win only four times over the last couple of months, the last being a five-wicket defeat to Rajasthan Royals here on Friday.

However, the spirited performance from the likes of Mukesh Choudhary, Matheesha Pathirana and Prashant Solanki ensured Dhoni leaves the season with the hope of a strong comeback next year.

"Whatever games they have got, they have learned a lot from it. One of the biggest examples is Mukesh. He has played all the games but what is impressive is to see from the first game to the last game how he has improved, how he can bowl at the death," Dhoni said at the presentation ceremony.

"Still what he will do is go back and learn out of the outings he has got. That's what we really want from players. Once they have got that experience, what is important from next year once they turn up from IPL is that they don't start from scratch again.

"That is what is needed from the youngsters and most of them have made the most of whatever chance they have got. Our Malinga (Pathirana), he's really good. It's difficult to pick him and I feel he will definitely contribute next year for us in a big way."

CSK endured one of their worst IPL campaigns, as they went out of reckoning for a play-offs spot quite early in the season.

Most of CSK's senior players like Dhoni, Ambati Rayudu and Robin Uthappa haven't had a great IPL and that has been the biggest failure of the 'Yellow Brigade'.

The bowling suffered a lot because of the absence of an injured Deepak Chahar and the inability to retain Josh Hazlewood.

"We have done well in patches but what is important is to keep doing well as a team. The crucial thing is whenever you get an opportunity, once you are in, you need to make the most of it whether you are a bowler or a batter and keep learning," Dhoni said.

"It's not a one-year tournament. You keep coming back year after year. So once you keep learning and once you mature, that's when you capitalize and be a big IPL player for the next 10-12 years. That's what you need from youngsters."

After a blazing start, Moeen Ali slowed down considerably, and Dhoni said the team was a batter short which forced the England all-rounder to "change his momentum".

"What we need to realize is we're playing a batter light. Once we lost those quick wickets, Moeen had to change his momentum. I feel if one of the batters had batted with him, he could have continued his momentum.

"The role and responsibility got slightly swapped once we lost those wickets and that made it really difficult. So a batter light with the last four, they're not really known for their batting.

"If we went hard and lost another wicket there, we wouldn't have got anything that we would look to defend. I would say (we were) 10-15 (runs short)," Dhoni said.

RR skipper Sanju Samson said his team deserved to qualify for the play-offs in second place.

"The way we've played throughout the league stage stands out. We've had great games where almost everyone has stood up to win games. We deserve to be in this position is what I feel," Samson said. 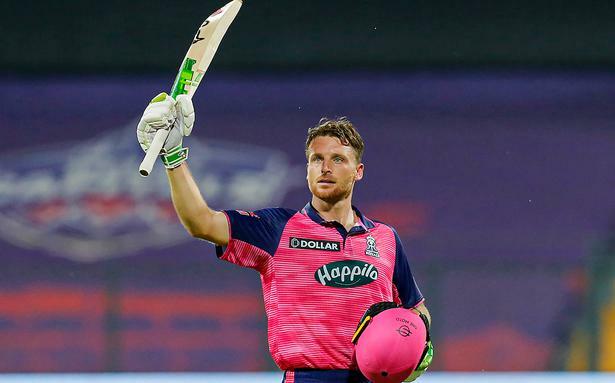 The Hindu
From analysis to the latest developments in health, read the most diverse news in one place.
IPL 2022: Royals seek another Buttler show versus CSK to clinch play-off spot

MUMBAI: Having gone off the boil in the last few games, Jos Buttler would be eagerly waiting to pounce on…

MUMBAI: Ravichandran Ashwin, once again, proved his utility with the bat when his team needed it the most as Rajasthan…