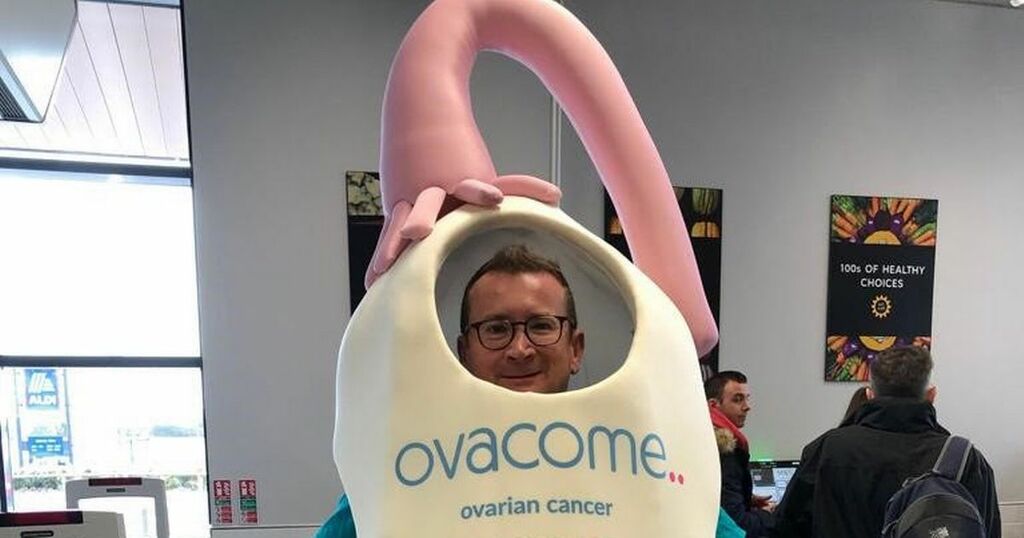 Craig McMurrough, otherwise known as Mr Ovary, is taking part in his tenth Great North Run this weekend in memory of his sister and to raise awareness of the disease which took her life.

Cheryl Earnshaw died of ovarian cancer five years ago, just three weeks after being diagnosed with the cruel disease.

Now Craig is raising both money awareness in his eye-catching costume which he hopes will educate people about the four main symptoms of the disease to look out for.

He has already collected £40,400 for the ovarian cancer support charity Ovacome and is pacing ahead with training to reach his £100,000 target.

Regular spectators of the half marathon may remember Craig running through the streets dressed as a giant shoe, a bear, a Red Arrow and a giant breast.

This year he is topping his past efforts by wearing a 6ft ovary costume made out of foam for Ovacome.

He also plans to spread the message of the main symptoms of the disease using Ovacome's B.E.A.T acronym: B is for persistent bloating that does not come and go, E is for eating difficulty and feeling full more quickly, A is for abdominal and pelvic pain you feel most days and T is for toilet changes, urinary or bowel.

His first stop was in Harrogate, where he collected £400.

Now the human resources director from Royston, Hertfordshire, hopes by taking part in the Great North Run, he will reach an even bigger audience to raise more funds and awareness.

“It is such a special race for me as my family are from the north east and it has such a great atmosphere,” he added.

The father of one, who has become renowned in the East of England for running through the streets in his ovary costume with a collection bucket in hand, hopes to meet up with his friend, Karaoke Man, who famously sings his way around races to make money for charity. “Hopefully Karaoke Ovary will be back together,” he joked.

“I was so moved by the experience, people were so generous and warm. I had a few tears at times throughout the day as people shared their stories of losing loved ones to this terrible disease.”

“Equally I was given hope by survivors who thanked me for what I’m doing which made it extra special.”

So far Craig has competed in 19 marathons and climbed Mount Kilimanjaro where he placed a photo of Cheryl and an Ovacome T-shirt at the summit. His efforts were recognised last year when he was announced as a finalist of the Daily Mirror Pride of Britain Regional Fundraiser of the Year award for Anglia West.

“It means a lot to me to make a difference in memory of Cheryl,” Craig said.

“The costume makes quite an impression and will help people remember the symptoms I talk about."

"Now that most people in my neighbourhood will have come across Mr Ovary and the message that a cervical smear test will not pick up the disease, it is a no brainer to take him out onto the road.”

Next stop on his tour will be West Bromsgrove and then Manchester.

● If you would like to donate to help Craig reach his £100,000 target, please visit his online fundraiser here.