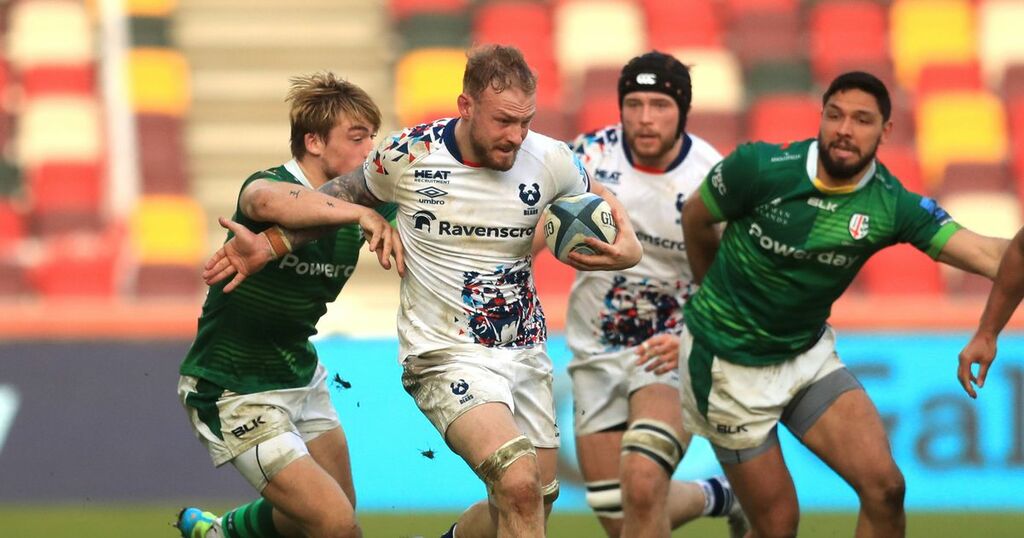 There is a reason Pat Lam has put getting more Bristolians into the team at the centre of his long-term vision for Bristol Bears.

Speaking to lifelong Bristol fan Mitch Eadie, who moved from the terraces at the Memorial Stadium to pull on the blue and white hoops, you quickly understand how much the club means to him.

“You are not just playing for you, you are playing for the fans as well,” backrower Eadie explained.

“You are playing for the 10-year-old kid down Kingswood Rugby Club, the local side where I began 20 years back.

“I am trying to use that as motivation because the club means a lot to me.”

In many ways, Eadie was the poster boy for Bristol Rugby when he left in 2017/18 for Northampton Saints as the club were relegated into the Championship once again.

Having come through the academy to make 130 appearances between 2010 and 2017 the powerful forward was twice named the players’ player of the season at Bristol.

But during his three-year stint at Franklin’s Gardens, the club underwent a dramatic transformation, not just with a rebranding to the Bears, but to the very core of the club’s philosophy and essence.

Gone were the days of being underdogs and plucky losers, operating out of the clubhouse at National League Two South side Clifton RFC. Bristol Bears became a club with a culture for excellence, with world-class players at the top of their game like Charles Piutau and Semi Radradra, all newly homed in an £11.5m world-class training facility to match their lofty ambitions.

Eadie admits, even with a warning from friends, when he returned to the West Country the change was startling.

He said: “I had heard from Joyecy [Bristolian second-row Joe Joyce] and a couple of the other boys that the environment had changed but I came back and it was like chalk and cheese.

"It was like a completely different vibe. The club has just moved on leaps and bounds.

“It is amazing to see how far the club has come.

“Growing up watching Bristol Shoguns, then Bristol Rugby, now the Bristol Bears, the transformation has been amazing.

“From a fan’s point of view, even when I was at Northampton I always followed Bristol - the club means a lot to me and I am going to try and put that onto the pitch and use it as motivation this season.”

For Eadie, now 29, pre-season this summer represents a fresh start, having missed out on selection for large swathes of the 2020/21 season, making just one start in Bristol’s 34-34 draw away at London Irish.

Unfortunately that day the forward’s yellow card at the Brentford Community Stadium contributed to the Exiles overcoming a 25-point deficit to snatch a draw.

A delightfully honest Eadie said: “It didn’t go the greatest for me last year but I knew it was going to be difficult getting into a squad with Dan Thomas, Steven Lauauta and Nathan Hughes in the backrow - that is pure class.

“And on the back of that, you have got people like Jake Heenan and Fitz Harding coming through.

“We are a really competitive back row, we try and really drive standards for each other. We try and connect well with each and if you are doing that for each other then you are only going to get better as a team.

“Ultimately as a team, we want 15 guys on the pitch who are going to win at the weekend, whoever that is in the shirt.”

But Eadie, standing at 6ft 3in and 16 and half stone with memories of the fans cheering his name, did not return to his boyhood club to hold tackle bags, he wants to play, especially with a mouthwatering derby against Bath Rugby at what is likely to be a sold-out Ashton Gate in Round Three of the Gallagher Premiership.

“You come back to pre-season and you want to stake your claim,” Eadie said. “I didn’t get as much game time as I wanted last year.

“I want to prove to Pat and the coaches they can put their trust in me and put me into that eight shirt or that six shirt, wherever they want me.

“It is going to be a long season and we are going to need everyone to contribute and I am looking forward to putting my stake down and hopefully getting that trust.”

Having finished top of the mountain at the end of the regular season in 2020/21, topping the Premiership table for the first time in the club’s history in the professional era, the campaign ended in disappointment for the Bears.

Much like at the Brentford Community Stadium earlier in the year, Bristol let a 28-0 lead slip to lose 36-43 in overtime to Harlequins in their home semi-final.

But after ‘a break mentally’ and weeks of gruelling hard work on the training field, Eadie believes the Bears are in good shape to be serious contenders for silverware again this season.

He said: “This is probably my 10th or 11th pre-season and they don’t get any easier. There has been a lot of fitness, a lot of ball skills.

“Pat and the team demand high standards so we have put ourselves in good stead for those upcoming games.

“We are trying to raise all our standards across the team and I think we have put ourselves in really good stead coming up to Saracens, we know what they are going to bring and it is just down to us to put what we have been practising for the last ten weeks onto the pitch.”

Away from rugby Eadie, now 29, has one eye on the future having just started a new groundworks and construction company with his father-in-law, called Ground 8 Developments.

But don’t for one second think Eadie’s full attention isn’t on first shifting aside some players with big reputations ad claiming a spot in this Bristol side week-in, week-out.

Asked whether what it would mean to run out against Saracens on the opening night of the season and then Bath two weeks later, Eadie simply replied: “It would mean everything, especially the Bath game.”

That’s why Bristolians are at the heart of Lam’s vision.