Mother says letter to Jenny Morrison made a difference for her, but fears for others left behind 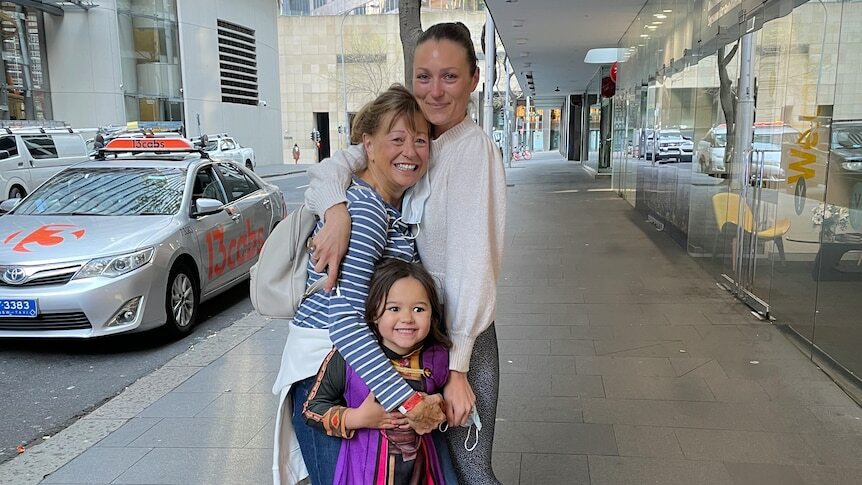 A migrant mother in desperate need of her family's assistance amid postnatal depression after the birth of her child has called out Australia's border policies, saying there is one policy for celebrities and another for everyone else.

Alexandra Parker was reunited with her mother Lynn Downer this morning, fresh out of hotel quarantine and for the first time since 2019.

"The relief I feel is indescribable," Ms Parker said.

Ms Parker had to fight for this day to come.

Had her plight not come to the attention of Jenny Morrison, wife of Prime Minister Scott Morrison, she believes her mother would still be in the United Kingdom.

Ms Parker was diagnosed with postnatal depression after the birth of her second child, Jack, and had applied three times on compassionate grounds for her mother to come to Australia. Each application was denied.

She said she needed her mother's help with her 5-year-old daughter Lily and Jack, now 15 months.

"I was just an anxiety ridden mess every single day," Ms Parker said.

Ms Parker had received media coverage around her case after starting a petition and signing an open letter to Mrs Morrison, who had publicly revealed her own struggle with postnatal depression.

"A couple of days later I got a phone call from a person from the Department of Home Affairs and they apologised to me," she said.

"They said that they should never have declined the exemption, and then they go on to give an exemption for my mother to travel to Australia.

"At first I thought it was a prank call … and I just couldn't believe it. I was absolutely shellshocked.

Ms Parker is happy to finally have her mother by her side.

"At the same time, because I had to go and bare my whole soul and everything that happened to me on live TV … it should never have got to that," she said.

"I should never have been put in that position to have to do something like that.

"It's the most scariest thing I've ever done."

With more than 7.6 million migrants living in Australia, Ms Parker said there were thousands of other people in similar situations.

She believes there has been one rule for celebrities and sports stars during the pandemic when it comes to border closures, and another for everyone else.

"I will not stop fighting for everyone else in dire situations that must be reunited with family," Ms Parker said.

The ABC has contacted the Prime Minister's Office to ask if the PM or his wife approached Home Affairs in this or any other case.

"No," a spokesperson said.

"Those decisions are handled independently by the Australian Border Force."

Diyana Hioe is originally from Indonesia, and her mother lives in Singapore.

Like Ms Parker, she said she needs her mother here in Australia to help with her children, 8-year-old Elijah, 5-year-old Edmund, and 5-month-old Ella, who has complex medical issues.

Ms Hioe is a single mother who has experienced stress and anxiety during the postnatal period.

She has applied four times for exemptions for her mother to travel to Australia to help her out, most recently six weeks ago on compassionate grounds.

All have been declined.

"She has been in Singapore ever since, waiting to come back here again," Ms Hioe said.

Ms Hioe insists she needs her mother by her side.

"I feel so desperate, I feel so sad," she said.

"Sometimes I just lie in bed with my baby, crying.

The ABC has contacted Australian Border Force for comment but is yet to receive a response.