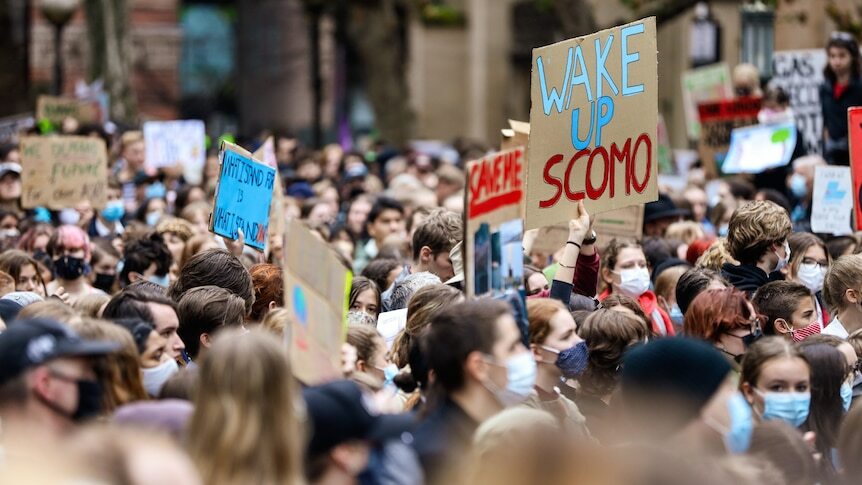 As the federal Coalition negotiates a climate policy ahead of the Glasgow COP26 summit, a new report says the majority of Australians support a target to achieve net zero.

The Australia Institute's Climate of the Nation report, which has been tracking Australian attitudes to climate change since 2007, revealed today 69 per cent of people support a target.

The majority support a transition through renewables, while only 12 per cent support a gas-powered recovery.

The progressive think tank surveyed more than 2,500 adults over a week in August.

Richie Merzian from the Australia Institute said at 75 per cent, it was striking that concern for climate change was at an all-time high.

"Three-quarters of Australians are concerned about climate change, despite coming off the back of a major pandemic," Mr Merzian said.

"We're seeing state governments take many of these policies forward, and I guess the question that remains is whether the federal government will follow.

The survey showed there was still a lot of misinformation about the fossil fuel sector and its contribution to the economy, according to Mr Merzian.

Despite that, the report found people are increasingly in favour of phasing out coal-fired power stations, even if it costs more in the short term.

"A whopping 82 per cent of Australians want to see a phase-out of coal power stations, and coal is the largest single source of greenhouse gas emissions when burned," Mr Merzian said.

"I think people have now clearly understood that we need to phase out our coal power stations."

Even in Queensland people's views on the future of coal has changed, with respondents who believe coal mining has a strong economic future dropping by 8 per cent on last year, down to 37 per cent.

There were few differences between the states, or between regional and metro respondents.

"Whilst we have this idea, much like we do with the misinformation around gas and coal, that there is this huge divide between the bush and the city, we're still talking just slightly over the the error margin really," Mr Merzian said.

But public opinion on climate change does not necessarily equate to people changing their vote according to Rebecca Colvin from the Australian National University, who researches public attitudes to climate change.

But she said polls like this one can have more of an impact on everyday people.

"Having these results year after year — it's the Australia Institute's polling, the Lowy Institute's polling, a whole lot of public polling — evidence is telling us that we do have these big majorities and that is empowering for everyday Australians to feel like they're not alone," Dr Colvin said.

"We're seeing that the trends in Australia of increasing majorities being concerned about climate change is matched around most of the world."

It is not just public pressure mounting on the Australian government over its climate policy, but a shift globally to act faster to curb emissions.

If Australia continues to lag behind there are fears exports could suffer, with the European Union and others considering carbon tariffs.

A new report from the Climate Council predicts 50,000 jobs could be lost in Queensland, and 20,000 in New South Wales, if Australia's trading partners introduce carbon border adjustment mechanisms (CBAM).

The Climate Council modelled how CBAMs in South Korea, China, and the G7 would impact Australia.

Reliance on coal exports would see Queensland and New South Wales take the heaviest hits and lose a combined $15 billion in GDP and 70,000 jobs, according to the report.

While the report looks at a "worst case scenario" where Australia takes no climate action, Ms Hutley said it was "very feasible".

With COP26 looming, Ms Hutley said "the whole world's moved on from net zero 2050" and more ambitious medium-term action would be needed to avoid the worst impacts of CBAMs.

"What the COP26 talks is looking for is serious action and commitment by 2030, with 50 per cent reduction being the minimum," she said.

"[Australia should] divert funds from the fossil fuel sector, which is going to die out effectively, and put it into helping transition people, skills, and capital so that we've got these new opportunities of green hydrogen, green industries."