India and the United Arab Emirates (UAE) signed a bilateral “comprehensive” trade pact on Friday. Announcing the Comprehensive Economic Partnership Agreement (CEPA), the biggest trade pact of the last seven years, Prime Minister Narendra Modi welcomed investment from the Gulf country into Jammu and Kashmir and said the initiative would open new routes for regional trade and connectivity and advance “collective interests” of India, Israel, the UAE, and the United States. Commerce and Industry Minister Piyush Goyal said the CEPA would have strong anti-dumping measures.

The Supreme Court on Friday ordered the Uttar Pradesh government to refund damages recovered from the persons accused of “destroying public property” during protests against the Citizenship (Amendment) Act (CAA). The assets recovered by the State, according to the government’s own oral assertion in court, are worth “some crores”. The blow came shortly after the State, on the backfoot days after being accused by the apex court of being the “complainant, adjudicator and prosecutor”, informed a Bench of Justices D.Y. Chandrachud and Surya Kant that it had withdrawn show-cause notices issued by Additional District Magistrates since December 2019 in 274 cases of “alleged destruction of public properties” and subsequent proceedings.

Air India on Friday said it would operate three flights between India and Ukraine next week. These flights are scheduled for February 22, 24 and 26, it tweeted. The flights would operate to the Boryspil International Airport. In response to requests on the micro-blogging site for more flights, the airline stated that it was “in the process of increasing the number [of flights]”.

U.S. President Joe Biden said Friday he’s “convinced” that Russian President Vladimir Putin has decided to launch a further invasion in Ukraine, saying he has “reason to believe” it will occur in the “coming days” and will include an assault on its capital, Kyiv. After weeks of saying that the U.S. wasn’t sure if Mr. Putin had made the final decision to launch a widespread invasion, Mr. Biden said that assessment had changed. “As of this moment I’m convinced he’s made the decision,” Mr. Biden said. “We have reason to believe that.”

Umar Khalid brought in handcuffs due to ‘miscommunication’: police

A day after former JNU student leader Umar Khalid was produced before a Delhi court in handcuffs following which the court sought an inquiry report from the Delhi Police Commissioner in the matter, senior police officers cited “confusion” and “miscommunication” in court orders as the reason. A senior police officer from the Delhi Police 3rd Battalion, which is responsible for escorting undertrials from jail to court, said, “It was a matter of confusion… A court had earlier issued orders to handcuff Umar Khalid in the JNU sedition case but in another order passed on January 17, it had withdrawn the same, but it was not communicated to us…”

Headscarf and a social fabric in tatters

As the sun set on the coastal town of Udupi in Karnataka on Tuesday, 17-year-old Aliya Assadi sat on the steps of Jamia Masjid, her mind racing in different directions. She wants to be a wildlife photographer. She’s worried about her board exams. But her thoughts keep circling back to the violence and anger over her choice of attire: the hijab. Assadi is one of six students at the Government Pre-University College for Girls, Udupi, who has been barred from the classroom since December 27, 2021, for wearing a hijab. “I have been wearing a hijab since I was six years old. It is religious and it gives me a sense of security and confidence. I am uncomfortable removing it. What I don’t understand is why I am being forced to choose between the hijab and education,” she says.

The National Investigation Agency (NIA) on Friday arrested its former Superintendent of Police (SP) Arvind Digvijay Negi on the charge of leaking secret documents of the agency to an accused in a case against overground workers of the terror outfit Lashkar-e-Taiba (LeT). In November last year, the NIA had arrested Kashmir-based human rights activist Khurram Parvez in the same case.

Narrative for change gets under way in Punjab

As the high-pitched election campaign for the Punjab assembly elections, slated for February 20, came to a halt on Friday, a narrative about bringing a change in Punjab appears to have been set - surrounding this tale, the Aam Aadmi Party seems to have an edge of perception over its rivals in the electoral battle, even as the Shiromani Akali Dal is well within the reckoning making it a tough battle for the ruling Congress to retain its government.

Polling to fill over 12,800 posts in more than 640 urban local bodies across Tamil Nadu will commence at 7 a.m. and end at 6 p.m. on February 19. More than 2.79 crore residents, including 1.42 crore women, 1.37 crore men and over 4,300 from the third gender, are eligible to vote. Between 5 p.m. and 6 p.m., only those having COVID-19 symptoms and those who have been infected will be allowed to vote, according to the Tamil Nadu State Election Commission (TNSEC). Over 1.54 crore are eligible to vote in the Municipal Corporations and over 64 lakh and over 59 lakh are eligible in the Municipalities and the Town Panchayats, respectively.

The Narendra Modi government would never have withdrawn the three farm laws if there were no Assembly elections, Congress general secretary Priyanka Gandhi Vadra said on Friday while addressing a virtual rally on the last day of campaigning for the third phase of the Uttar Pradesh (UP) elections. While addressing the virtual rally, Ms. Gandhi said that the Bharatiya Janata Party (BJP) government in U.P. claims credit for distributing free ration to families but such dole makes people  nirbhar on the government rather than  atma nirbhar or self-reliant.

U.S. President Joe Biden said on Friday he's “convinced” that Russian President Vladimir Putin has decided to launch a further invasion in Ukraine, saying he has “reason to believe” it will occur in the “coming days” and will include an assault on its capital, Kyiv. After weeks of saying the U.S. wasn't sure if Putin had made the final decision to launch a widespread invasion, Biden said that assessment had changed. “As of this moment I’m convinced he’s made the decision," Mr. Biden said. "We have reason to believe that.” He cited the United States’ “significant intelligence capability" for the assessment.

Spiking tensions in eastern Ukraine on Friday aggravated Western fears of a Russian invasion and a new war in Europe, with a humanitarian convoy hit by shelling and pro-Russian rebels evacuating civilians from the conflict zone. A car bombing hit the eastern city of Donetsk, but no casualties were reported.

Uttar Pradesh Chief Minister Yogi Adityanath on Friday alleged that the father of a convict in the 2008 Ahmedabad serial blast case is campaigning for the Samajwadi Party in Assembly polls. He alleged the Samajwadi Party was "protecting terrorists". A special court on Friday sentenced to death 38 members of terror outfit Indian Mujahideen in the 2008 serial blasts which killed 56 people and injured over 200.

The U.S. Embassy announced Friday that Washington is lifting a ban on inspections of Mexican avocados, freeing the way for exports to resume. Ambassador Ken Salazar said in a statement the decision came after Mexico and the United States agreed “to enact the measures that ensure the safety” of agricultural inspectors who are in charge of making sure Mexican avocados don’t carry diseases or pests that would harm U.S. orchards.

Bhuvneshwar Kumar and Harshal Patel produced superb bowling in slog overs as India survived some anxious moments before walking out with an eight-run victory over West Indies in the second T20I that handed them an unassailable 2-0 lead in the three-match series here on Friday. Chasing a stiff 187, wicketkeeper-batter Nicholas Pooran (62 off 41 balls) and Rovman Powell (68 not out from 36 balls) hit belligerent fifties to keep them in the hunt as they needed just 29 runs from the last two overs.

IPL likely to be played at six venues in western India

The Indian Premier League’s (IPL’s) 2022 edition is likely to be played at six venues — four in Mumbai, Pune, and Ahmedabad — from March 27 to May 28. The Hindu understands that the Board of Control for Cricket in India (BCCI) has shortlisted five venues in Maharashtra for the 70-match league stage. The playoffs, including the final, are likely to be played at the Narendra Modi Stadium in Ahmedabad. In a bid to avoid flight risk in the wake of COVID-19, the BCCI has all but zeroed in on the Maharashtra corridor. It is understood that the proposal was informally discussed with the representatives of the franchises during the last week’s Player Auction. 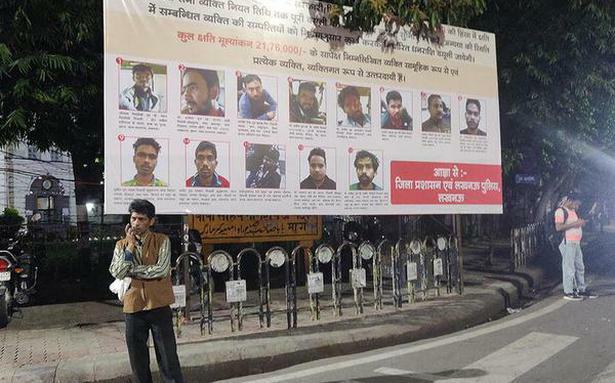 Return penalty, assets seized after anti-CAA protests, Supreme Court tells U.P.
The cases would now be referred to a claims tribunal set up under the newly enacted Uttar Pradesh Recovery of…

The Hindu
One subscription that gives you access to news from hundreds of sites
Morning Digest | Singapore PM’s speech uncalled for, says India; India, UAE to sign trade pact, and more

The Hindu
Biden and Putin are live-blogging a pre-war

Biden says Putin has made up his mind. Putin claims Biden is baiting him.

The U.S. secretary of agriculture says that a Russian invasion of Ukraine offers American farmers a chance to boost production…

Forbes
One subscription that gives you access to news from hundreds of sites
Putin Has Decided To Invade Ukraine, Biden Says U.S. Intelligence Indicates

"As of this moment I'm convinced he made the decision," Biden said Friday afternoon, with an invasion expected within the…