Moment cyclist crashes head first into car but who do you think is in the wrong? 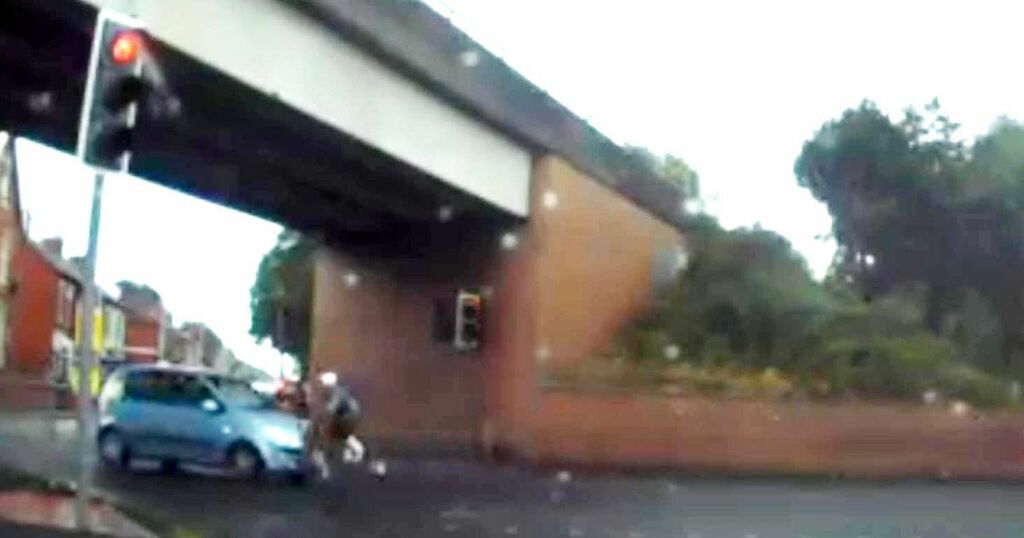 A cyclist was thrown into the air after crashing at high speed into a slow moving car leading to a debate over who was in the wrong.

Motorist Angela Johnstone, 54, witnessed the collision and recorded the bike hurtling into the car at a set of traffic lights in Blackpool.

As she waited on a red light at the junction, several cars could be seen crossing from left to right in front of her.

Then suddenly a cyclist comes at a fast pace from the right and hits a blue car that was slowing down and indicating to turn right.

The cyclist could be heard slamming on his brakes before being thrown up into the air from the force of the collision.

The man then crashes to the ground and the driver’s number plate also came off due to the impact.

Watching the drama unfold, Ms Johnstone, could be heard screaming: “Oh my God!” when the crash happened.

Ms Johnstone, from Coatbridge, North Lanarkshire, who was on holiday in Blackpool claimed that the driver of the car stopped but then quickly left after being threatened by the cyclist.

The cyclist allegedly said: “You should go away or I will f***ing punch you,” to the driver of the blue car, claimed Ms Johnstone.

Then on October 2, her husband Gordon posted the video on Facebook and said he disagreed with her about who was at fault.

He wrote: "This was my wife driving the car in Blackpool. When she came home she said she witnessed a hit and run as the driver, although stopped, then left the scene.

"She spoke to the police and the cyclist, information from the cyclists was he was doing 30mph at that point.

"I reminded my wife of my dashcam and let's just say I have a different point of view and on seeing it so does she."

Lots of people have commented on the video with the majority appearing to blame the cyclist.

One person wrote: 'That was the cyclist's own fault, he rode straight across there, didn't slow down or look, so I for one only have sympathy for the poor car driver whose car the cyclist ran into.”

Another agreed: “Car stopped when they saw the cyclist, cyclist coming too fast to stop in time, also not helping themselves much by not wearing bright/ noticeable coloured attire.”