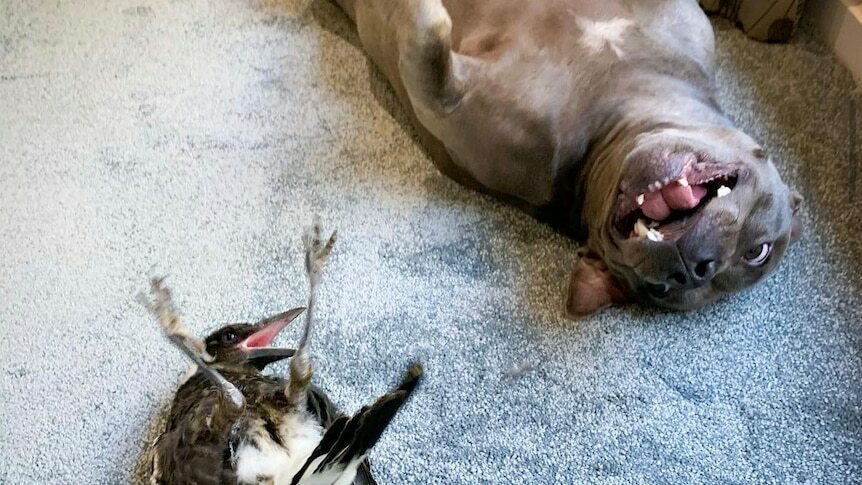 They say a dog is a man's best friend, but how many canines do you know that consider a magpie their mate?

Peggy the English Staffy and Molly the magpie's "human mother" Juliette Wells believes the pair's unlikely bond is as rare as a maggie's teeth.

Ms Wells rescued Molly about 12 months ago from a dog park near her home at Upper Coomera on the Gold Coast.

She and partner Reece Mortensen were out walking Peggy when they saw a baby bird alone on the ground.

After unsuccessfully trying to reunite the magpie with its parents, the pair brought the bird home and nursed it back to health.

Ms Wells said when Molly first swooped into their lives, Peggy was a little unsure about the feathered visitor to their home but later began producing milk for the baby bird, which kept it alive.

"Their favourite thing to together is to sunbake. Peggy just loves it and Molly just opens up her wings and they lie there together," she said.

"They play ball together, both of them love toys and really just hanging out, snuggling together."

Peggy has since had a litter of puppies that have also become friends with the rescued bird.

With more than 44,000 Instagram followers, Peggy and Molly have won the hearts of fans from as far as Brazil with what Ms Wells calls their "real-life Winnie the Pooh and Piglet story".

"Their relationship certainly is quite unique. It started about one year ago, when we brought this abandoned magpie home and we nursed her back to health.

"When Peggy had the pups we were really concerned about what would happen with their relationship, but it feels like they've just grown so much closer. They're still best friends. Molly keeps an eye on the pups, it's just beautiful."

Videos of the animals playing, sleeping and chilling out together have gone viral – with new followers flocking to the page during the COVID-19 pandemic.

"I take beautiful photos and film our everyday life and I am hoping we can help people's mental health and make them realise there is more to life than what's going on ... and it's what you focus on that counts."

As for Molly's future, Ms Wells says she's a free magpie who can fly away whenever she likes.

Molly is a wild bird

"We've never caged Molly. We're fortunate where we live, we do back on the bush. She'll go and fly whenever she wants and birds do come and play with her.

"We'd love her to live here forever but we also want her to have her own family.

"She's a wild bird, she has her own needs. It would be awesome if she met someone and had babies, brought them back here and we'd have an even bigger family."