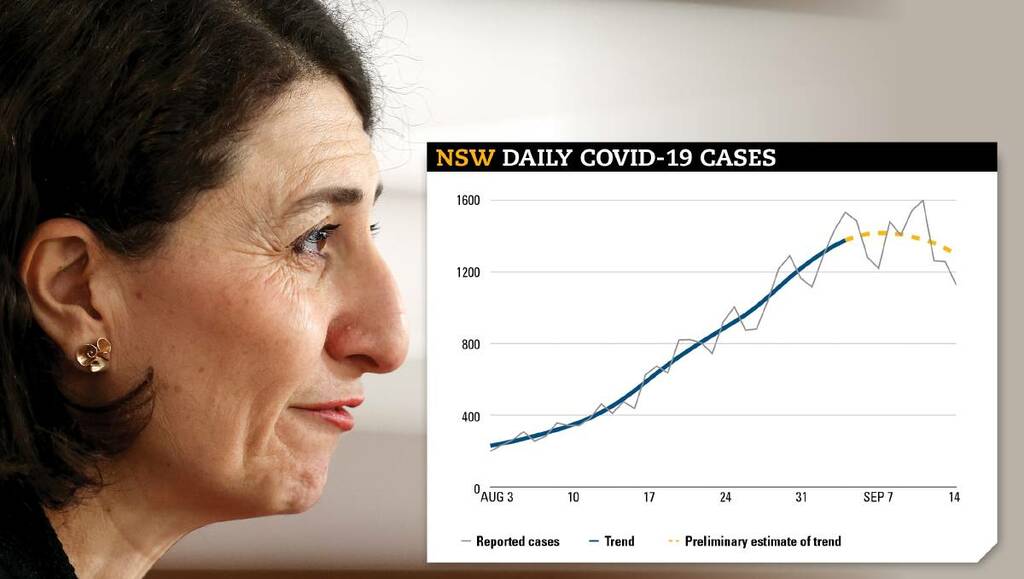 There is good reason to think COVID-19 cases will soon peak in NSW, if they haven't already.

Deputy chief health officer Jeremy McNulty said on Tuesday that it was "still a little bit early to know" if the transmission rate of the virus had fallen below one, which would signal a contraction of case numbers.

Monday case counts, which are reported on Tuesdays, have been lower than on other days of the week during the latest outbreak.

Dr McNulty noted that case numbers could bounce around and he would "like to see a few more days" before declaring a peak.

But modelling suggests the numbers, at least on a statewide level, probably peaked in the middle of last week.

"Gladys' light at the end of the tunnel is in sight," he wrote on Twitter.

Chris Billington, a post-doctoral research fellow in physics at the University of Melbourne, has calculated the transmission rate began falling in mid-August, when all of regional NSW joined Sydney in lockdown and the government introduced a night-time curfew in 12 areas of concern.

His calculations show the rate dropped below one some time before last weekend.

His trend analysis shows cases grew at about 5 per cent a day for most of August before an acceleration to 9 per cent a day in the middle of that month.

The average rate of increase began falling quickly at the end of August.

Mr Perrett said his method, known as a Henderson moving average, was similar to, but more accurate than, the simple averages sometimes used in "trying to discern what's going on behind bumpy statistics".

He said the most recent estimates of the trend were preliminary and could change as more raw numbers came in.

The Burnet Institute's Allan Saul, Brendan Crabb and Mark Stoove, writing in The Conversation on Tuesday, identified the curfew and closing more retail stores in Sydney's 12 LGAs of concern as the turning point in stopping the virus.

They warned that the virus' spread was growing outside the 12 LGAs and tighter restrictions might be required to control it.

"Other LGAs with rising case numbers should not rely solely on vaccination to cut case numbers in the short to medium term," they wrote.