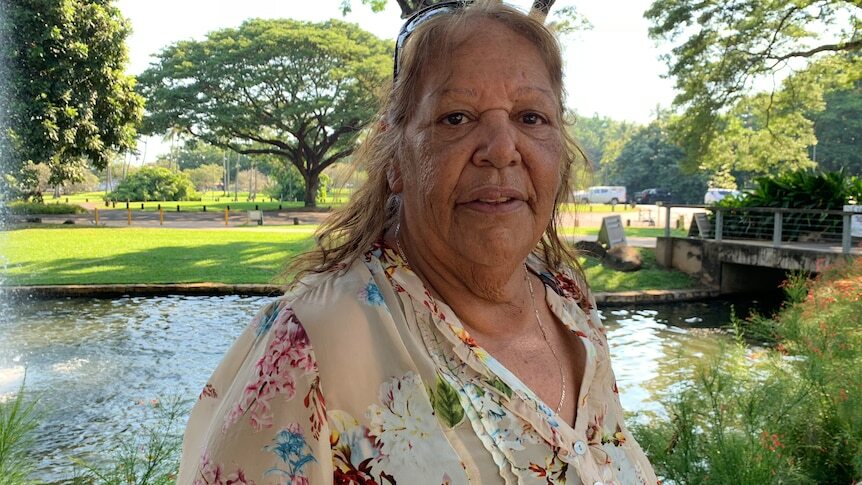 When it's Aboriginal mining royalty distribution time in Tennant Creek, Joebessgo Mayers has an even more difficult job trying to get kids to school.

He leads the federal government-funded anti-truancy team which goes around the Aboriginal town camps on the edge of the Northern Territory town every morning.

At least 40 per cent of kids in Tennant Creek don't attend regularly.

"When they get their royalties, families are more active with alcohol," he said.

"They buy cars and electronics and whatever's left over goes straight into alcohol and gambling at a certain house where people play for big money."

The royalties are payments mining companies have to make to Aboriginal traditional owners in the NT for hosting operations on their land.

Traditional owners also get lease payments for infrastructure like mine haul roads and railways crossing their land.

Mr Mayers said for some families having this money appears to remove the imperative to send children to school.

"We see the kids standing around the parents gambling and the kids are like, 'We're not going to school because we want to stay here,' because they're watching their parents gamble," he said.

About $230 million a year in Aboriginal royalties is paid by mining companies in the NT.

Since NT Land Rights laws were passed in 1976, $3.2 billion has been collected into the Aboriginal Benefits Account (ABA) managed by the federal government.

Today that could buy 6,400 Aboriginal community houses, 41 F-35 Joint Strike Fighters or half of an Attack Class submarine.

About a third is paid to Indigenous land councils, which are still helping get Aboriginal land back and negotiating deals for access to it.

The other 40 per cent in the ABA is given out by the federal government as grants to Indigenous organisations for various projects, including the language centre building which the attendance team works out of in Tennant Creek.

The other third goes directly to traditional owners.

Some royalties not enough to help struggling families

Warumungu community leader Linda Turner's family gets some of this money because a railway line and mine road are on their land.

She said by the time it is divided, it isn't enough to make a big difference to her finances.

"I got royalties twice and I got $800 out of that, which went towards my power bill," she said.

She also sees a lot of royalty money spent on alcohol, bought on the black market to get around Tennant Creek's tight liquor restrictions

"When the royalties were on a couple of months ago, people went to Mount Isa and bought cartons of Mosel [white wine], they were selling that box for $1,000, and a bottle of rum of $200," she said.

"It just causes a lot of fighting between families, and people [are] just drunk, and then court list just gets bigger because they get picked up for drunk driving or whatever."

She said many traditional owners want to keep getting royalties in cash.

"I think the rules need to change regarding royalties," she said.

"But I don't think it's ever going to happen; people believe it's their right to get that money.

"When people live in poverty and all of a sudden you've got a lot of cash, you're in paradise for a couple of days, there's no stress, no worries, you can do whatever you want.

"It's amazing in Tennant Creek when its royalty day, people are dressed up and are walking there to be on time and we are thinking, 'Wouldn't it be wonderful if they did that to look for a job or go to their work?'"

Ms Turner works as the chair of the Julalikari Council, which provides aged care and youth accommodation in the town and has businesses including a petrol station.

Warumungu traditional owner and community leader Norman Frank is another member of the Julalikari Board.

He said his clan group puts their royalty money to good use by pooling it into a trust fund.

They get royalties from a gold mine, gas developments and a pipeline.

"Half of it goes in our pocket, but half, we make sure it goes right way so that we know we got something there for the future.

"There's a lot of clan groups starting to put money aside now and that's really good, that's the main key now because government can't give any more funding out."

Other traditional owners have pooled their royalty money to buy businesses in Tennant Creek including a hotel and a car hire firm.

But Mr Frank said he is worried too many of his people are relying on the dole and royalty payments instead of looking for jobs.

"I try every day driving around the CLAs [town camps] trying to get these young people going to work," he said.

"They make me sorry, these young people, we need our young bucks to get off their bum now and start using the shovel or trying to get a job around town or training."

He said reliance on the dole and royalties and a long-running shortage of Aboriginal public housing in Tennant Creek has kept many people in poverty and poor living conditions.

"I feel sad seeing my people living like that, in their own country, living in the Third World."

Dion Williams is one of the people living in a tin shed in the town's Village Camp.

He has a job as an alcohol support program worker for the town's Anyinginyi Health Aboriginal Corporation but said a private flat he rented for a while cost half of his pay and he could not afford it.

"At winter time now, it's cold and in the summer, it's like living in an oven," he said.

"There was a toilet and shower block here but the water's not even running now.

He showers before work at a friend's house and cooks on an open fire grate outside the shed.

One of the people living in tents on Tennant Creek's outskirts is one of Anyinginyi Health's clients Bonnie Camphoo.

The elder on a disability pension said she moved out of the town's Aboriginal hotel because people were stealing her clothing and shoes.

In its commitment to do more to close the gap last month, the federal government promised to help reduce Aboriginal community housing overcrowding, from a majority now, to 12 per cent by 2031.

Tennant Creek's former Indigenous Northern Territory MLA Elliot McAdam has been out of politics for 13 years and has also worked in senior positions in several organisations providing services to the Indigenous communities in Tennant Creek.

He said he has seen royalties both contribute to and alleviate poverty in the town.

"It allows the people to be able to purchase washing machines, motor cars, clothes for their kids, holidays, at the same time there's a significant amount of money that goes into alcohol and drugs," he said.

"But the bottom line is, it's their money and people should have the right to do whatever they want with their money and I think they and the land councils will work out a way forward, over time."

But he thinks the 40 per cent of royalty money given out as grants from the ABA isn't being used effectively enough to provide employment for remote and regional Indigenous people.

"There's been great wealth generated as a result of the royalties system, but I would say there's been minimal or little impact in terms of Indigenous employment," he said.

The federal government has announced it is going to change the priorities for grants from the ABA "to invest in large-scale, strategic initiatives, such as agriculture and tourism projects" as well as continuing to give out smaller grants for community projects.

Mr McAdam said he thinks both the federal and NT governments could make the biggest difference in closing the gap by handing back contracts for delivering services and Aboriginal public houses back to Indigenous people.

Some of those contracts for programs like work for the dole and public housing maintenance services were taken away from Julalikari in Tennant Creek in 2017 because of community complaints it was not delivering them properly.

But Mr McAdam feels it and other Aboriginal organisations have improved their governance and it's time Indigenous people were trusted to regain local control.

"We've got to start handing back programs back to Aboriginal organisations because that's where all the employment is. It's in caring for people, disabilities, education and health.

"Because there's no doubt about it, the Aboriginal dollar is now an industry in its own right, it's absolutely massive across the NT.

"You take the black people out of Alice Springs, Katherine, Darwin, and certainly Tennant Creek and you would not have an economy at all."

Both the NT and federal governments have committed to handing back more control and programs to Indigenous groups to try to close the gap.

But some of Tennant Creek's native title holders, the Patta Group, have formed a lobbying bloc along with other local Aboriginal organisations because they feel starting to achieve that on the ground will require concerted pressure.

Pat Brahim from the Patta Group said they are working to ensure that their community is not railroaded by governments who come in with set ideas about what they want to spend money on and how.

"It's about how do we come together and say, 'This is our country, you guys have come into our space, so this is our expectation'," she said.

A decade ago, she was the chair of the ABA and said it then funded a series of remote stores, which created local jobs and increased food security.

She is supporting the federal government's other suggestion about how it plans to use the ABA to alleviate poverty, by using some of the money to build Aboriginal housing.

"Instead of individual applications, just doing the one-off type things, I think it would be a better investment supporting Aboriginal people," she said.