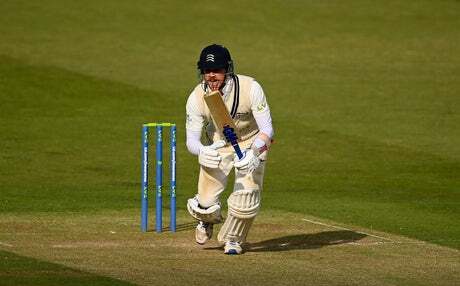 Middlesex racked up the highest total in their history, breaking a club record that had stood for almost 100 years, as they declared on 676 for five against Sussex.

Sam Robson scored a career-best 253 and Robbie White hit his second successive century as he was unbeaten on 110 when the visitors ended their first innings on day two of their County Championship match at Hove.

It was the sixth highest total Sussex had ever conceded, the greatest for 21 years, but openers Tom Haines and Ali Orr enjoyed benign conditions too, taking their side to 103 without loss at stumps.

Haines passed 50 for the seventh time this season and at stumps he was unbeaten on 73, which included 11 fours, with Orr 17 not out.

Much of the day had been spent ticking off records as Middlesex, who had resumed on 400 for two, batted Sussex out of the game.

Sussex's bowlers stuck manfully to their task, but the pitch offered little assistance and the three wickets they did take came from misjudgements by the batters.

Robson moved to his double hundred in the sixth over of the day with a boundary off Henry Crocombe and then accelerated, with his next 50 runs coming off 55 balls and taking him past his previous best of 231, against Warwickshire in 2013.

It was a mild surprise when he tried to hit off-spinner Jack Carson through mid-wicket and gave Haines, running across from mid-off, a catch. Robson had faced 356 balls and hit one six and 30 fours.

Carson picked up a second wicket before lunch when Max Holden was taken at bat-pad for one, but White and Martin Andersson sentenced Sussex to more suffering in the baking heat during the afternoon as they added 174 for the fifth wicket.

They went past Middlesex's previous highest score of 642 for three against Hampshire at Southampton in 1923 and, just before tea, White, who made his maiden century against Derbyshire at Lord's last week, took a boundary off Haines to reach his 100.

Andersson had played more fluently and looked on course for a century of his own, but on 88 he tried to hit Delray Rawlins over the top and was unable to clear long on.

That was four balls before tea, but Middlesex opted to finish the over after the interval before Orr and Haines could run off to put their pads on after 161 overs in the field.