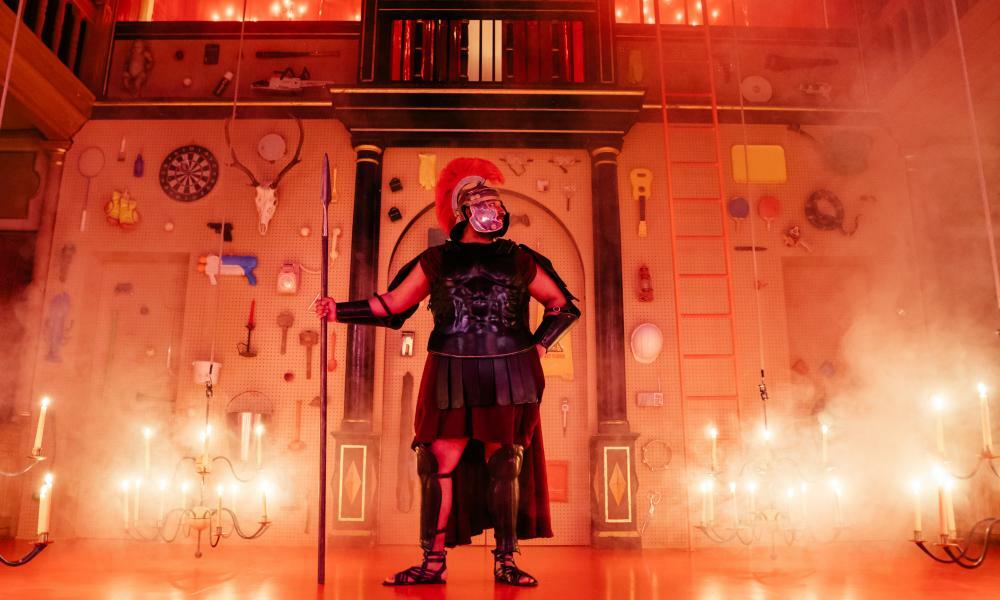 “Welcome in,” calls Irfan Shamji as latecomers shuffle into the tight space. “We’re about to start a banger.” Playfully retelling some of Ovid’s ancient myths, this gloriously fun performance delves into the depths of the Greek gods’ cruelties and the unfortunate humans who happened to get in their way.

Written by the Globe’s writers-in-residence, Sami Ibrahim, Laura Lomas and Sabrina Mahfouz, Metamorphoses is a gallivanting piece of storytelling. The cast of four take it in turns to tell tales of anger and incest, spiders and entwined trees, pairing up to brilliant comedic effect. Dressed in white, with a collection of props pinned to the wall behind – a set that could be put to greater use – they pick out some of the most shocking and best loved myths.

Many of the stories will be familiar, but no prior knowledge is required to enjoy it. Shamji, Steffan Donnelly, Fiona Hampton and Charlie Josephine are excellent guides into the world of the gods. Their voices are almost sing-song in style, but they jolt out of it with crass jokes and abundant swearing. “She said, ‘There he is, that motherfucker,’” Josephine says of the Ciconian women spotting Odysseus. “She said that, only in Greek.”

Peaches are used to relay the gruesome story of Procne and Philomela, and bloodied body parts are laid out clinically as Hecuba tells of her son Polydorus. In one of the best stories, Josephine and Donnelly sit on camping stools with a flask of tea, reliving Baucis and Philemon’s visit from the gods.

When they dive into the darkest bits of the stories – the cannibalism and severed limbs – the show uses silence smartly. The stories are simple and to the point but lose none of their potency. Each one is stripped to the core and told in the most suitable way, whether with laughter, anger or existential despair.

By nature of its form, Metamorphoses can’t tie up the disparate threads of its tales. But these are eternal stories, beautifully and accessibly told. It’s hard not to have a good time.