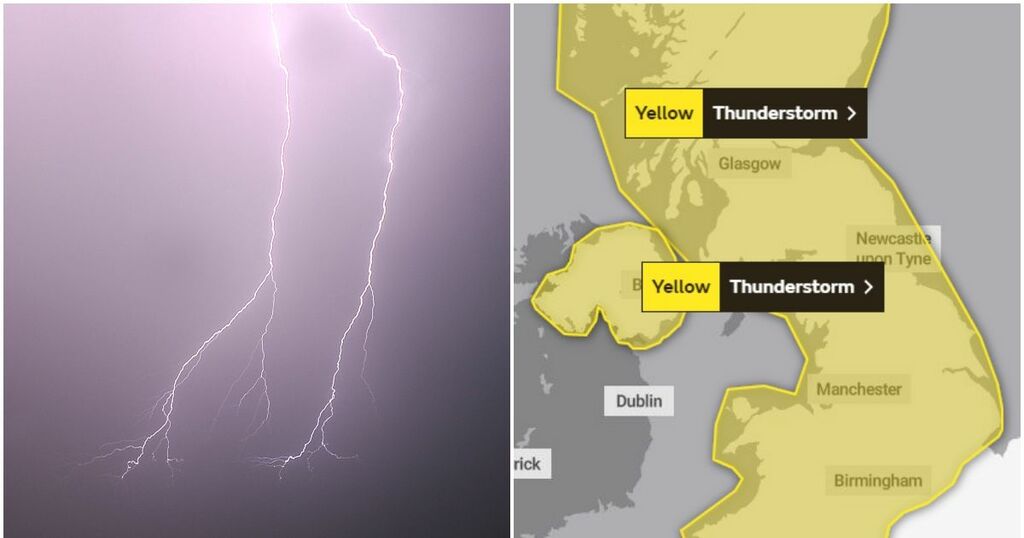 The Met Office has updated its yellow weather warning for thunderstorms covering large parts of the UK.

Despite most of the country basking in a mini-heatwave over the past few days, conditions are set to turn for the worst tomorrow.

Temperatures have soared to 28C in Greater Manchester, while Scotland has broken its record for the highest September temperature in more than a century.

However from 10am on Thursday, forecasters have warned that heavy showers and thunderstorms have the potential to bring 'surface water flooding' in a few places, and disruption to travel.

The yellow weather warning was first issued on Tuesday, but on Wednesday was updated to be brought forward by one hour.

The affected areas have also been expanded to cover much of Scotland and more of southwest England.

"Following overnight rain and showers, more intense showers and thunderstorms are expected to break out fairly widely from late-morning, before easing during the evening," the Met Office says.

"Whilst many areas will miss the most intense storms, torrential downpours are likely in a few places.

"Where these occur, there is potential for 20 to 30 mm of rain in less than an hour and up to 40 mm in two hours. This will have the potential to generate surface water flooding, especially if it falls over an urban area."

The warning is in place until 8pm on Thursday.

It covers all of Scotland, Wales, and northern England, parts of Northern Ireland, southwest England, and the Midlands.

Forecasters say to expect a small chance that homes and businesses could be flooded quickly, with damage to some buildings from floodwater, lightning strikes, hail or strong winds.

Spray and sudden flooding could lead to difficult driving conditions and some road closures, they add.