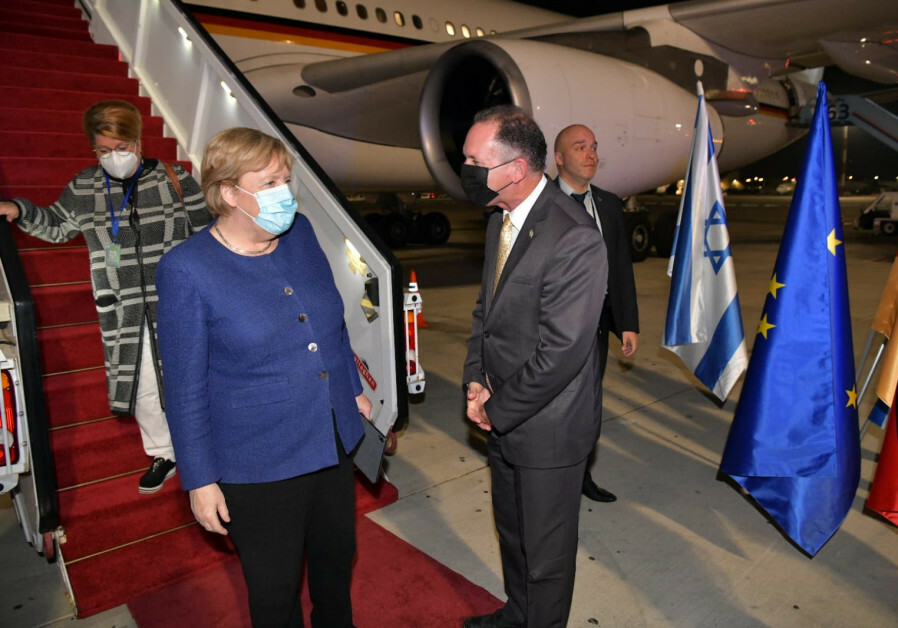 German Chancellor Angela Merkel landed in Israel late Saturday night for what is expected to be her last visit before she leaves office.

“Looking forward to a rich program that will strengthen our unique [Israel-German] relationship,” Germany’s Ambassador to Israel Susanne Wasum-Rainer tweeted in advance of the visit.

This will be Merkel’s seventh official trip to the Jewish state since she took office in 2005. Merkel has been a strong ally and friend of Israel during her tenure at the country’s helm.

The exact date of Merkel’s departure from office is unknown. She is expected to remain the head of Germany’s caretaker government until a new one is formed in the aftermath of the country’s September 28th election.

On Sunday, she will speak with Prime Minister Naftali Bennett, Foreign Minister Yair Lapid and President Isaac Herzog and attend a dinner hosted by Bennett.

In addition, she will meet with the cabinet, visit Yad Vashem World Holocaust Memorial Center and receive an honorary degree from Haifa’s Technion-Israel Institute of Technology at a ceremony in Jerusalem.

During her last visit to Israel in 2018, when she received an honorary doctorate from the University of Haifa, Merkel spoke about the importance of preserving the memory of the Holocaust.

“We are at an important time because those who witnessed the Nazis are passing away. We therefore have to fight to preserve this memory and need to be aware of how we preserve memory in a world where there are no longer witnesses to these crimes,” she said.

On Monday, Merkel will participate in a round table conversation in Jerusalem with Tel Aviv University’s Institute for National Security Studies.

Israel and Germany have a strong strategic relationship, and the topic of Iran is expected to be part of Merkel’s conversations while in Israel.

In a manner akin to the US, the two countries are at odds over how best to prevent a nuclear Iran. Germany is also one of the six world powers that signed the 2015 Joint Comprehensive Plan of Action, otherwise known as the Iran deal, which Israel opposed.

Israel has been against the revival of the deal, which has been largely dormant since the Trump administration reneged on it in 2018.

Talks to revive the deal have faltered and in the interim, and countries are concerned that Iran’s nuclear advancements could soon make the deal irrelevant.