I have been placed under house arrest in Srinagar, says Mehbooba Mufti 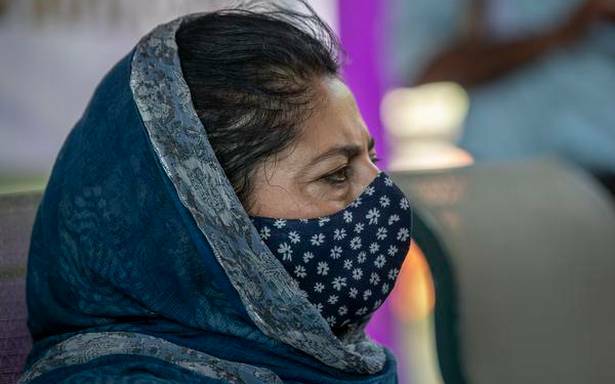 Peoples Democratic Party (PDP) chief Mehbooba Mufti on Tuesday claimed that she had been put under house arrest in Srinagar, a day after she alleged that the police had shown disrespect to the body of Syed Ali Shah Geelani.

“GOI [Government of India] expresses concern for the rights of Afghan people but wilfully denies the same to Kashmiris. I’ve been placed under house arrest today because according to administration the situation is far from normal in Kashmir. This exposes their fake claims of normalcy,” she said in a tweet.

The former Chief Minister after a party meeting in Srinagar alleged ‘maltreatment’ of the body of Geelani on September 2.

CPI(M) leader M.Y. Tarigami on Tuesday said the Ladakh administration’s recent order is “validation and vindication of the essence of Article 35A in ensuring constitutional guarantees to people of J&K and Ladakh”.

“Permanent Residence Certificate issued by the erstwhile State of J&K under Article 35A has now become the sole basis for defining permanent resident of UT Ladakh which is validation and vindication of the essence of Article 35A in ensuring constitutional guarantees to people of J&K and Ladakh which [Article 370] was arbitrarily made inoperative,” Mr. Tarigami, also spokesman of the Gupkar alliance, said.

The Ladakh administration recently passed an order to issue Resident Certificates to only locals for filling the non-gazetted posts in the UT, unlike the domicile laws passed for J&K earlier.

Mr. Tarigami said by scrapping the Article 370 and bifurcating the State into two UTs, not only has the BJP government undermined the basic structure of the Constitution but also the relationship between Jammu & Kashmir and the Union itself. “The only way to put it back on track is by immediately restoring democracy along with full autonomy and statehood to the erstwhile State of Jammu and Kashmir.”