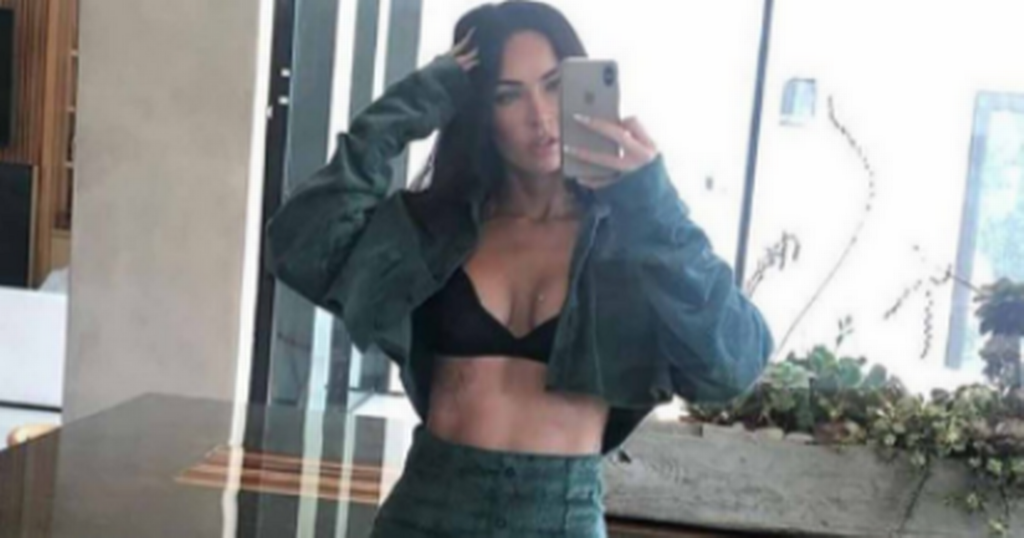 Megan Fox has teased her army of fans with a suggestive social media post about her raunchy antics on a trip with boyfriend Machine Gun Kelly.

The Hollywood babe took to Instagram to share two sexy snaps of herself posing by a giant marble table.

She added a cryptic message alluding to the naughtiness she got up to on the table with her man.

“When I tell you that the table at this air bnb saw some things,” teased Megan in a post to her 13.5 million Instagram admirers.

She ran her fingers through her hair, the 35-year-old model smouldered as she flirted with her fans.

No wonder America rapper beau MGK, 31, was hot under the collar as the pair seemed to relive their saucy holiday exploits.

Megan and MGK, real name Colson Baker, have been dating for over a year after she split with husband Brian Austin Green.

The couple were married for more than 10 years and share three children, Noah, eight, Bodhi, 7, and Journey, 5.

And since their split Megan has been happy to post loved-up snaps of herself and MGK, giving fans a glimpse of their blossoming romance.

However, the flirty exchange seemed to backfire on the couple after some social media watchers found their bragging distasteful.

Some fans even branded the posts as “desperate” and “gross”.

“Imagine being the Airbnb owner and coming across this,” slammed one Instagram user.

“They know they can just text each other with this stuff, right?” joked another.

A third blasted: “Gross. Some things the rest of the world does not need to know.

“Please find some shred of decency and buy the owners a new table now.”

Someone else summed it up pretty simply, dubbing the post “Cringe”.

Another pointed out Kelly’s 12-year-old daughter to a previous relationship has her own Instagram page, making her privy to details of her dad’s wild sex life.

“This is too much y’all, his daughter is on the gram,” they stressed.

Speaking last year, Megan revealed on the Give Them Lala…with Randall podcast, that he sensed some “wild s**t was going to happen” with MGK.

She admitted: “I could feel that some wild s**t was going to happen to me, but I wasn’t yet sure what.

“I just felt it like, deep in my solar plexus, that something was going to come from that, so then, we met on set.

“Instead of a soulmate, a twin flame is actually where a soul has like ascended into a high enough level that it can be split into two different bodies at the same time. So we’re actually two halves of the same soul, I think.”