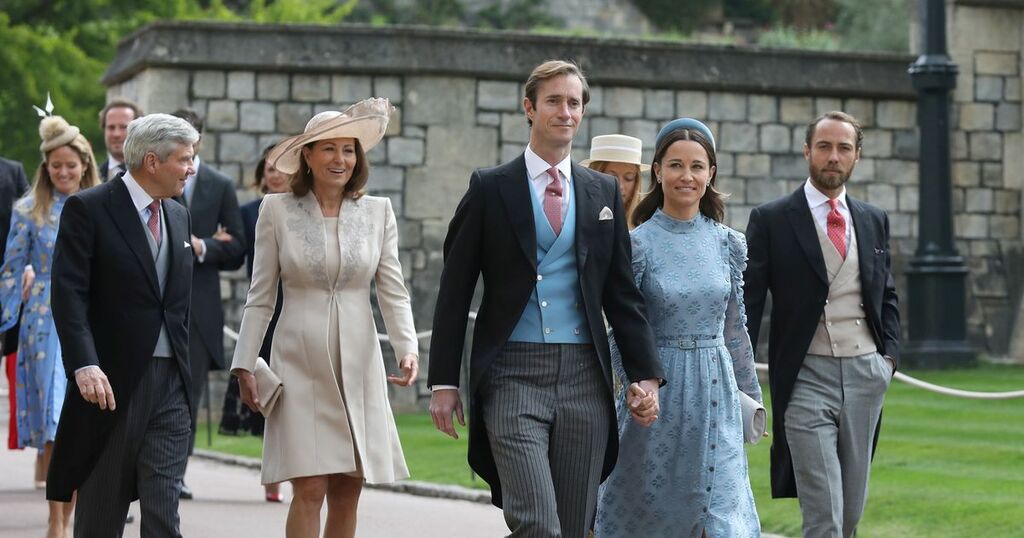 It was a busy weekend for the Middleton family, as the Duchess of Cambridge's younger brother James finally tied the knot after months of delays.

He married Alizée Thevenet in a beautiful ceremony in the south of France, announcing the nuptials with a stunning post on Instagram.

In it, he revealed he married the "love of my life" surrounded by family - suggesting his nearest and dearest all travelled to France for the ceremony.

Among them were thought to be James's proud older sister Kate, her husband Prince William and their children Prince George, Princess Charlotte and Prince Louis.

But who are Kate's other close Middleton family members believed to have been at the wedding? Here we reveal all...

James is several years younger than Kate and other sister Pippa, and is the only son of parents Carole and Michael Middleton.

Like his sisters, he attended St Andrew's School, in Pangbourne, Berkshire, and Marlborough College in Wiltshire.

In 2011, he was given a starring role at Kate's wedding to Prince William as he gave a bible reading.

He is the co-founder of Boomf - a personalised gifts company - and last year launched Ella & Co, a dog food firm.

James is active on Instagram, regularly posting sweet images of his now-wife Alizée, who he has been dating since 2018, and their pet dogs.

Before falling for Alizée James had an on-off relationship with actress Donna Air.

In January 2019, he opened up about his battle with depression in a searingly honest account of the illness.

James described how he struggled to get to sleep and said the noises in his head felt ‘as if ten different radio stations were competing for airtime’.

He said he was motivated to speak out thanks to his sister Kate and Princes William and Harry’s work on encouraging people to talk about mental health.

His wedding to Alizée at the weekend came after it was twice postponed due to the Covid-19 pandemic.

Alizée is the newest member of the Middleton clan after marrying James in a stunning ceremony on Saturday.

She is a French financial analyst who grew up in several countries, and can speak three languages - English, French and Spanish.

Her name was chosen by her father and is a nod to the French word Alize - a tropical wind.

He told MailOnline: "My daughter is named after my first love which is windsurfing and the Alize wind that fills the sails."

Alizée met James in a chance encounter at a private members club when his dog Ella "made a beeline" for her and the pair got chatting.

After dating, they got engaged in 2019 and twice had to postpone their wedding due to the pandemic.

After tying the knot in the south of France at the weekend, James described his new wife as "the love of my life".

At the head of the family is Kate, James and Pippa's mum Carole - a businesswoman who heads up the firm Party Pieces.

She was born in London and grew up in a relatively normal family in Southall, before becoming cabin crew with British Airways.

While working there, she met her husband Michael and the couple went on to have three children - Catherine (more commonly known as Kate), Pippa, then James.

In 1987, she set up her business Party Pieces, after she realised she could make money from creating party bags.

It is now a highly successful mail-order party supplies business and she and husband Michael are self-made millionaires.

She is a grandmother to five grandchildren and has been described as 'indispensable' after stepping in to help Kate and William with their three children.

The doting grandmother has previously spoken about how much she enjoys spending time with the grandchildren, telling Good Housekeeping how she likes to play games with them and "muck around".

She also explained how she enjoys cooking, dancing and going on bike rides with them.

Michael is dad to Kate's dad and walked her down the aisle to Prince William on her wedding day.

He has aristocratic ancestry and attended the prestigious Clifton College boarding school in Bristol.

Michael met wife Carole in 1980 when he worked as a flight dispatcher for British Airways.

He, Carole, Kate and Pippa lived in Amman, Jordan, for several years when he worked in the country for BA - but they returned to the UK for the birth of James in 1987.

Earlier this summer he joined eldest daughter Kate for the men's singles final at Wimbledon, with the pair spotted taking part in a Mexican Wave.

Pippa is the middle Middleton child, who shot to fame following her role as her sister Kate's bridesmaid at her wedding to Prince William.

She graduated from the University of Edinburgh with a degree in English Literature and briefly worked in PR.

After her sister's wedding, she was flooded with work - writing a book on hosting parties called Celebrate and having her own column in the Waitrose food magazine.

She is also a loyal supporter of the British Heart Foundation and has taken part in challenges such as long-distance bike rides and runs to raise money for charity.

In 2017, she married James Matthews - a hedge fund manager who is the older brother of Made in Chelsea star Spencer Matthews.

At their wedding, Prince George was a pageboy and Princess Charlotte was a bridesmaid.

In 2018, they welcomed a son Arthur, and earlier this year, Pippa gave birth to a daughter called Grace Elizabeth.

He first met Pippa in 2007, at his parents' lavish Caribbean resort Eden Rock on the island of St Martin.

According to reports they previously dated in 2012 but went their separate ways as Pippa moved on with financier Nico Jackson.

They later rekindled their romance at the end of 2015 before marrying in 2017 in front of guests including tennis star Roger Federer.

He and Pippa live in London with their two children Arthur and Grace.