Meeting between Health Minister and medical residents end with no deal 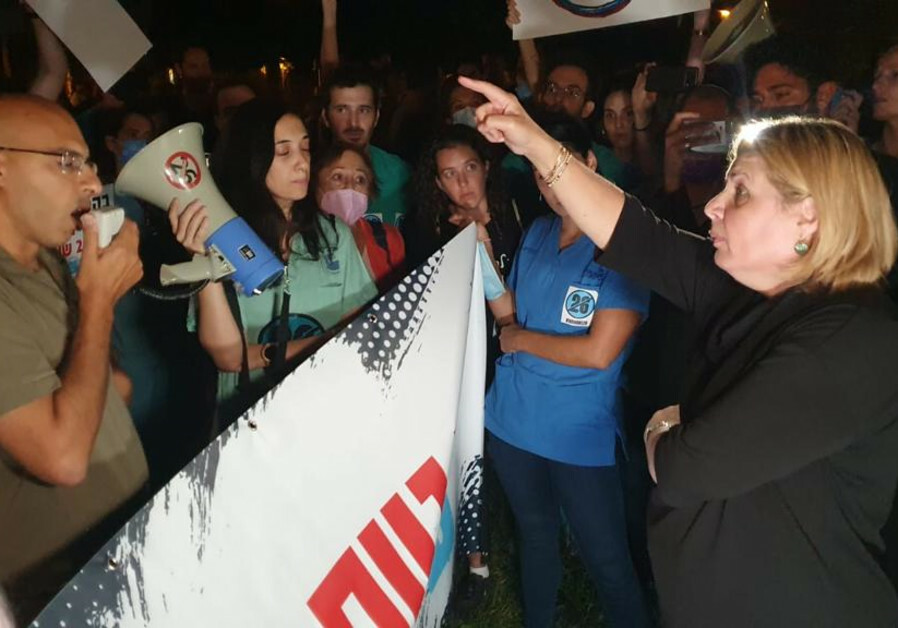 A meeting between Health Minister Nitzan Horowitz and the representatives of the medical residents, interns and students who have been demanding that their 26-hour shifts are shortened to 18 ended with no agreement.

“There was an open conversation with the minister and his staff in order to listen and be heard, but there were no negotiations and therefore there is no development,” said Dr. Rey Biton, head of the medical residents’ union, Mirsham. “We are continuing, sadly, with the resignation process.”

“We very much hope to have real negotiations,” she added. “We invited the Minister to have a practical conversation with us to suggest steps that could lead to a solution to this difficult crisis.”

Horowitz did not initially plan to attend the meeting between the representatives of the young medical staff where the ministry was set to be represented by its Director-General Prof. Nachman Ash.

“I decided to join the meeting because I am the minister of the medical residents, they are important to me, and I have been working for them since my days as an opposition MK,” he said before entering the room. “It is important for me to see them today, listen and understand what is concerning them.”

“As we have done since we began the process of shortening shifts, we will continue to work with the residents in collaboration and constant contact,” he added. “I am committed to shortening specializations, in all hospitals across the country. I have said this from my first day in the office, and I will achieve this goal. We are already taking a big and significant step, and this is just the beginning.”

The meeting follows days of protests by the young medical staff after the plan approved by the Health, Finance and Economy ministries last week only reduced working hours for a limited number of residents in periphery hospitals, as opposed to implementing a more comprehensive reform they were promised.

The issue of the excessive length of shifts for residents, interns and students has been controversial for years.

The current plan entails, over the course of five years, a decrease of shifts from 26 hours to 16 hours, plus two overlapping hours.

The first phase of the plan is scheduled to start on March 31, 2022, in hospitals in the periphery at 10 medical centers, and will apply to residents in all wards, except surgery. A year later, the shifts will also be shortened for residents in intensive-care units and in anesthesiology.

Over the course of the following four years, the new rules are set to be extended to residents in all fields in all hospitals.

In addition, according to the outline, as the new rules roll out, the average number of hours per week should not exceed 63, and beginning on January 23, the residents should not work more than a total of six shifts per month.

On Wednesday, before the protests began, the plan was described as a historic development by Horowitz.

“For the first time after years of talking, it has happened,” he tweeted. “The shortening of residents’ shifts is on the way. This is a historic change that until now everyone had avoided tackling. Therefore, we will start with 10 hospitals in the periphery, in all the departments, and in the next stages (set in the agreement) the outline will be applied to the whole country so that we will be able to recruit enough doctors.”

Israeli hospitals already suffer from a shortage of staff, exacerbated by the COVID-19 pandemic, and the Health Ministry says moving more quickly will create additional shortages.

For this reason, a provision to include emergency- and internal-medicine departments all over the country in the first phase of the new outline was scrapped, and the young medical staff took the protest to the street.

On Saturday night, according to Mirsham, over 1,000 people took part in a rally in Tel Aviv, in the street where Horowitz lives.

“I stand here today in great pain,” Biton said. They lied to us. Deceived us. We were promised a real outline, one that would guarantee to really shorten shifts, for everyone.”

Biton remarked that under the proposed plan only 10% of the residents would see their shifts shortened by 2022, as opposed to at least 25% to 30% they had requested. In addition, she stressed that for the following years no clear commitments and budget were presented.

Last Thursday, Biton delivered to the Health Ministry a collective letter of resignation signed by 2,500 people, according to Mirsham, adding that the individual – and legally effective – letters would be submitted to the hospitals by Sunday.

After the meeting with Horowitz on Sunday night that the letters will be sent during the week.