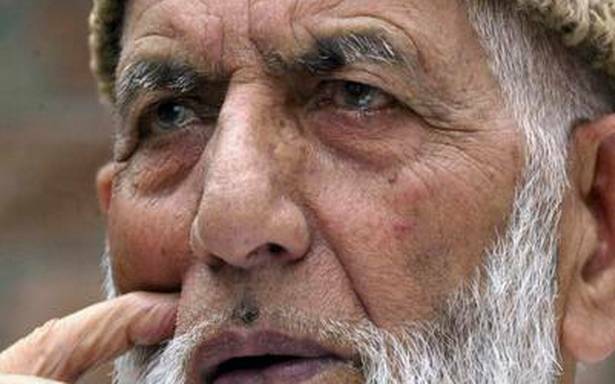 Incarcerated chairman of the Muslim League, Massarat Alam Bhat, was on Tuesday named the successor to Syed Ali Shah Geelani, who died on September 1, as the new chairman of the separatist amalgam, the All Parties Hurriyat Conference or Tehreek e Hurriyat.

“After the demise of our lifetime chairman Geelani and our senior leader Muhammad Ashraf Sehrai, the All Parties Hurriyat Conference has suffered an irreparable loss. Considering the challenges and the great role of the Hurriyat leadership, Massarat Alam Bhat has been elected as the next chairman of the Hurriyat,” a spokesman said in a statement issued in Srinagar.

The spokesman said a consultative exercise was conducted by members of the Hurriyat’s executive council “using different mediums to avoid arrests or any counter strategy by India”.

He described the situation in Jammu & Kashmir as “the worst” and as “oppression in full swing”.

“Especially,” the spokesman added, “the oppression of those people who are demanding the right to self-determination. Senior leadership is either detained or arrested.”

“This interim arrangement will continue till holding of elections as per the Hurriyat’s constitution, as and when the situation improves,” the spokesman said.

Sources said the decisions were taken by Kashmir-based leaders in consultation with leaders based in Pakistan occupied Kashmir (PoK).

Bhat (50) comes from a middle-class family and studied in Kashmir’s oldest, leading Christian missionary school Tyndale Biscoe, and then the Sri Pratap College, also in Srinagar.

He was first arrested in 1990 for being a “sympathiser” of the armed struggle and remained behind bars under the Public Safety Act till 1996.

Bhat shot into limelight for playing a pivotal role in organising the street agitations of 2008, 2009 and 2010.

The J&K administration in 2014, during a court hearing, described Bhat as one “who has anti-India sentiment in his blood and is to be detained to stop recurrence of 2008, 2009 and 2010-like street agitation”.

Like Geelani, Bhat is also a proponent of merging Jammu & Kashmir with Pakistan. At present, he is lodged in the Tihar Jail in New Delhi. He has spent over two decades in jails since 1990.

He was last arrested on April 17, 2015 after his supporters raised pro-Pakistan slogans and unfurled Pakistani flags in Srinagar during a welcome rally organised for Geelani.