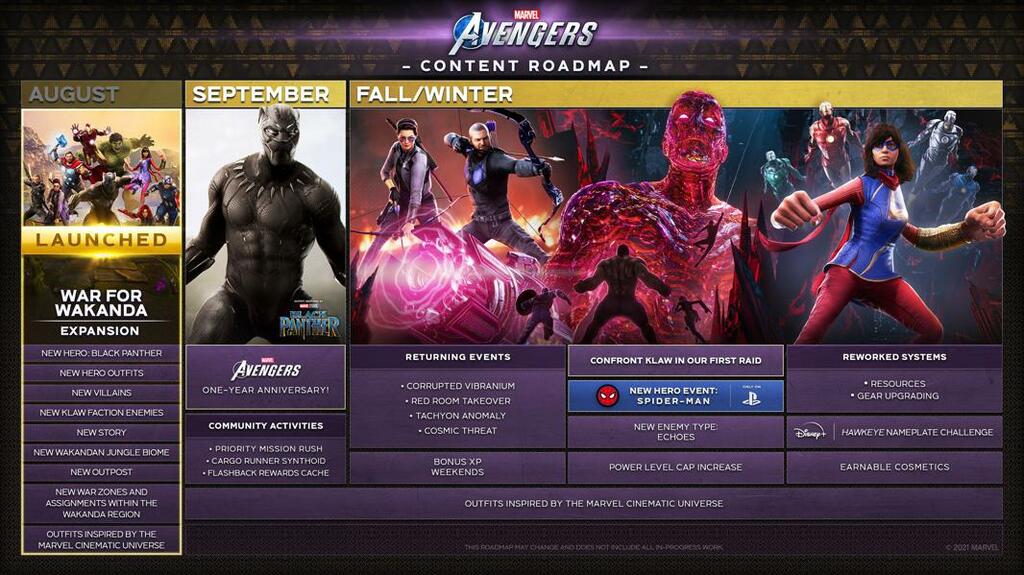 Well, they told me they were going to do another new roadmap when War for Wakanda settled down, and the Marvel’s Avengers team has done just that. They have released a new content roadmap that spans from now until the end of the year, but past that, they have confirmed that no, that is not where support for Avengers will end.

The roadmap doesn’t have a ton of wild stuff on it, and not really anything I’d consider a surprise. But for the first time, they have put Spider-Man on there, confirming that yes, he’s still coming and yes, he’s still a PlayStation exclusive, but in my early peek at all this when I got to talk to them, they would confirm literally nothing else about Spider-Man or his upcoming content, as presumably that is going to be a separate reveal. We don’t even have a general month window for him, but they did say definitely before the end of 2021, even if that’s later rather than sooner.

The second major item on the roadmap is the upcoming Wakandan raid. They are no longer calling it an Omega-Level Threat because unlike the Super Adaptoid mission, it’s something designed entirely from scratch and my guess is that OLT is kind of a mouthful where a raid is a more common term in this genre. You will be fighting super Sound Klaw again, but no, it is not a repeat of the Wakanda campaign mission, it’s all new.

With the raid, they confirmed that the gear cap was going up by a pretty significant margin. This is not Borderlands, so much of your old gear will be able to be upgraded to the new cap, and they are streamlining materials in the game so there aren’t so many. This will work somewhat like Destiny’s infusion system, where an activity like the hard mode raid (which does in fact have normal and hard modes) will drop the highest gear, and you can use that as a “base” to infuse lower level gear up to the new cap.

They also confirmed there are more reworks coming to making more activities in Avengers farmable. Rather than locking things per account per week, many may shift to per character instead. They said additional work was being done on gear, but did not get into specifics.

Elsewhere, there will be a brief connection to Disney Plus’s Hawkeye show for a mini event snagging players a nameplate. Seems to be something not as involved as the Black Widow Red Room event. More generally, they once again indicated players would be able to earn cosmetics like they used to, but didn’t put a date on that (nor is there a specific date on anything on this roadmap other than “before 2021”). Missing from this roadmap, oddly, is any mention of the Wasteland Patrol that got bumped for the OLT in the last roadmap, so if that is still in development, it’s not coming until next year, it seems.

My biggest takeaway from talking to Crystal Dynamics is actually not on the roadmap, that they were happy with the way War for Wakanda performed, even though we didn’t get any hard numbers for it. And as such, we now have our first confirmation that yes, Marvel’s Avengers is developing 2022 content which includes new heroes, villains and missions, though no specifics were listed. We were promised another roadmap, presumably one with some of those heroes and villains on it, before 2021 was over. So yes, Avengers will live on with live content into 2022, which did not seem like a guarantee a month or two ago. I’m happy to see that, and now the dream can live on about which other heroes besides Spider-Man might show up. Past datamines (very old ones) indicated we could see Captain Marvel, Winter Soldier or She-Hulk. Recent in-game teases talk about Loki, Doctor Strange and Scarlet Witch. So we’ll have to see.

So, this roadmap isn’t a ton of new info, but more information about Spider-Man is coming, and new content will keep arriving into 2022. I have no idea how long Crystal Dynamics will keep supporting Avengers, but it’s defying odds and continuing to release cool things, even if it still has much to work on, as ever.