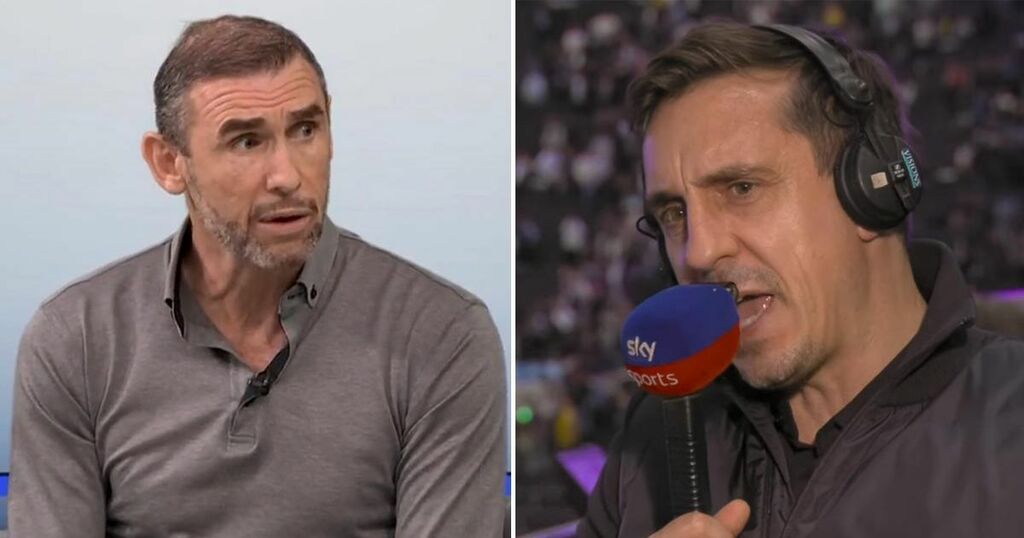 Arsenal defender Rob Holding was sent for an early bath in a crucial north London derby match against Tottenham Hotspur,…

Martin Keown has expressed his dismay at Sky Sports ' coverage of the north London derby, appearing to criticise Gary Neville for his commentary.

Thursday night saw Tottenham Hotspur demolish Arsenal 3-0, stealing the momentum in the race to finish fourth and qualify for the Champions League next season. Harry Kane and Heung-min Son got the goals to give Spurs an emphatic victory, with Keown's former team, Arsenal, conceding an early and seeing defender Rob Holding shown a red card for a "stupid' foul in the first half.

While much of the criticism was directed at Mikel Arteta and his players, Keown took issue with ex- Manchester United right-back Neville, Sky's coverage and referee Paul Tierney 's decisions - or lack thereof. Speaking on talkSPORT, the Gunners legend bemoaned one incident by saying: "If you look at Ben Davies it's like a pincer tackle and he tries to grab [Bukayo] Saka away and then nothing becomes of it.

"Maybe Sky didn't really want to make much of that and maybe that was the commentary team going one way rather than the other... I think the penalty was soft.

"Nobody really referred to it but last night I thought there were quite a lot of replays every time an Arsenal player made a foul. Suddenly you don't really see too many replays when there was a Spurs player that brought one down. That was a key incident, Saka was away on goal there."

Have your say! Who will finish fourth - Arsenal or Tottenham? Tell us your prediction in the comments section.

While any potential bias is certainly subjective, Neville was critical of Arsenal and in particular, centre-back Holding. "What is he doing? What is he doing? Oh my goodness," the former United captain said shortly after his dismissal. "I am watching the run and he has a jab with the elbow. He has been erratic for the first part of this game, he has been rash, he has been unsteady and he has to go."

Pundit Jamie Redknapp agreed, adding at half-time: "He had two incidents before he'd even been booked. We spoke before the game about derby matches, a match of this magnitude, you need cool heads, don't do anything silly. The second one with Son is silly, he is doing judo moves on the football pitch.

"You already have a major problem with him, he is too quick, too strong, and certainly do not get too tight to him, like this for his second yellow. That even could be straight red card because he puts his elbow up, it is a really poor decision from Rob Holding. I must admit, the manager gets it wrong too.

"Once you lose your centre-back, the first thing you do is get another one on as soon as you can. He should have got Ben White on, all of his staff are trying to figure out what to do, they are then left short and are done by a set-piece when they needed a centre back because they are not the tallest team either."

Arsenal defender Rob Holding was sent for an early bath in a crucial north London derby match against Tottenham Hotspur,…