ATLANTA — After a day filled with loitering …

• I wouldn’t expect much movement on the status of Commanders owner Dan Snyder over the league’s two days here in Buckhead. In response to the USA Today story that owners are “counting votes”, one executive here said, “We’d have to know a lot more than we do now” for the league to get the 24 votes necessary to take Snyder’s team from him. That, to be clear, doesn’t mean that owners aren’t counting votes—all of them are bracing for the results of former Securities and Exchange Commission chair Mary Jo White’s investigation, which could, in fact, lead them to know a lot more.

The real issue in getting the votes involves precedent, and the bar the other owners want to set for taking another owner’s team away. And the one thing I’d say we can all count on is that bar will be set very high (or low, depending on your perspective) for that. So stay tuned for the White report; its contents probably dictate where this goes next.

• While we’re there, the Commanders’ purchase of land that could be used for a stadium in Woodbridge, Va., was received in D.C. like the team was moving to Mars. And with the traffic in that area, it’s understandable why that would be the sentiment. That said, by comparison to where other teams are, the Woodbridge location, 23 miles from the city, isn’t all that far-flung.

The Patriots play in Foxboro, Mass., 28 miles from Boston. The 49ers play in Santa Clara, 42 miles from San Francisco. The Cowboys play in Arlington, 19 miles from Dallas. The difference here is that those teams are also close to other relatively large cities (the Patriots to Providence, the Niners to San Jose, and the Cowboys to Fort Worth), but the NFL hasn’t exactly had a history of shying away from suburban locations (the Jets and Giants are another example, playing 11 miles from Manhattan).

Ideally, I’d say most of us believe that the RFK Stadium site remains the ideal one for the Commanders. But I’m not sure that’ll happen absent the team being sold.

• It’s hardly a surprise to anyone in Arizona that Kyler Murray wasn’t there on Monday for the start of Cardinals OTAs. Last year, without a contract dispute, Murray missed a chunk of OTAs while training in Texas. So add Murray’s desire for a new deal into it, and the Cardinals having pushed the negotiation later into the offseason, and it makes sense that he wouldn’t be there today (He’s clearly comfortable with his routine in Texas).

Kliff Kingsbury did say Monday he expects Murray there for minicamp in June, but obviously a lot could happen between now and then.

• Accordingly, Cardinals being the team featured on the in-season version of Hard Knocks has a chance to be pretty interesting.

• To me, Aaron Donald not showing for Rams OTAs is probably a little more interesting.

Donald has three years and $55 million in cash left on his existing contract. To redo the deal, the Rams have to work through $21.5 million in cap charges on top of that, the de facto credit card debt for the original structure and restructures of the contract. Normally, the way to work around all that is to add a couple of years on the back end, and move money up. But navigating this one, and getting Donald the $30 million or so per he deserves might be a little tricky. And it’s worth noting that, in the past, Donald hasn’t been afraid to draw a line.

• The Colts’ decision to bring in Nick Foles is a good tell into where they see themselves as a team. Last year, they spent a fourth-round pick on Texas QB Sam Ehlinger, and Ehlinger has acquitted himself well in the time since. But with a well-rounded, ready-to-win roster and a quarterback in Matt Ryan that they feel is a significant upgrade, going out and getting an accomplished backup who has the experience in the system that Foles has with Frank Reich is insurance against Ryan going down for a few games at some point during the season.

And if you’re a championship contender, buying that kind of insurance is very valuable, given that it can make a difference in seeding, or even entry to the postseason at all.

• I think we already have evidence on the character part of pre-draft assessments on Chris Olave checking out, based on how he’s already gone to work with Saints star Michael Thomas (whom he knew before New Orleans drafted him, since both played at Ohio State). One New Orleans official told me the day after the draft that Olave being their “type of guy” was a factor in the decision to trade up for him. So far, so good on that front.

• One match I’m looking forward to seeing, and I know the people in Vegas are too—Darren Waller playing in Josh McDaniels’s offense. The tight end has been even better than expected, and, as a result, it’s pretty interesting to imagine what he and Davante Adams will look like playing together for one of the sport’s best play callers.

• The difference Matt Ryan has made from a cultural standpoint for the Colts, even to this point, has been palpable. And the pace and detail at which he works should be good for everyone on the roster—remember, the year Philip Rivers was in Indy was the COVID year, so most of the players on the team don’t have very much experience working with a quarterback at the level of Rivers and Ryan.

• Somehow, the Dwayne Haskins story got even sadder on Monday. Here’s hoping for peace for his family. 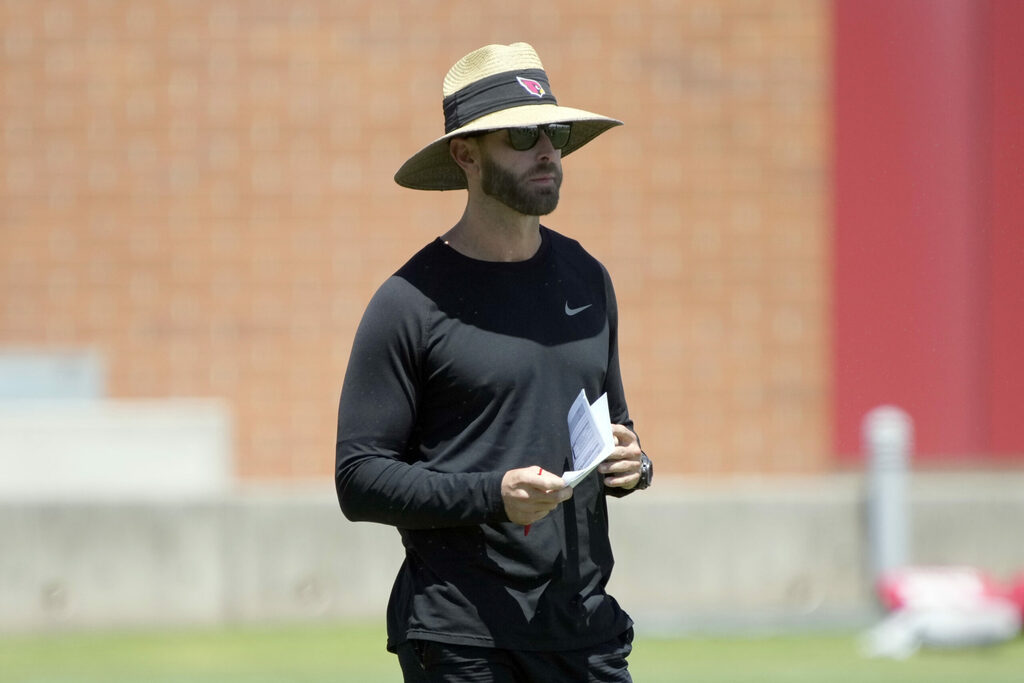 LOOK: Photos from Day 1 of Cardinals’ OTAs
Check out some of the images from the first day of practiced in OTAs for the Arizona Cardinals on Monday.

Today we come bearing some high-quality copium for disappointed 12s.