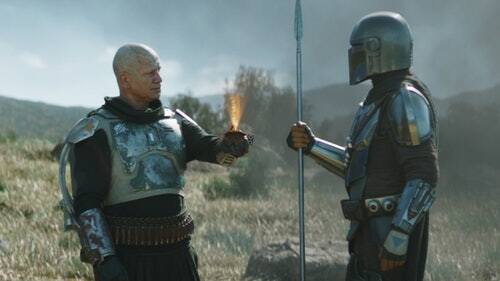 The Mandalorian Season 2 was more than just that big cameo in the finale. One of the most touching moments came two episodes earlier when Boba Fett returned to clear up a prequels era mystery and bash in a few Stormtrooper heads.

Boba is jetting off into his own Star Wars spinoff, but there’s a forgotten chapter from his Fett family history that could explain what’s coming next in The Mandalorian Season 3, and why the Empire’s next target could be Din Djarin himself.

Many fans remember the scene in The Mandalorian Season 2, Episode 6 where Boba Fett pulled Din Djarin aside to reveal the chain code embedded in his armor, which he inherited from his father Django. This code revealed Boba’s “father” (in actuality, just the source of his DNA) was a Mandalorian foundling, just like Din Djarin.

At first, this is just a touching connection between Boba and Din, but the backstory of Jango Fett contains multitudes outside of official Star Wars canon. One particular pre-Disney comic, 2002’s Jango Fett: Open Seasons reveals why the Empire’s greatest weapon could mean a return to its original tactics — with one terrifying twist.

Lost Legends is an Inverse series about the forgotten lore of our favorite stories.

In the comic, Jango is shown to be a foundling of Jaster Mereel. Jaster is the leader of the “True Mandalorians,” a vicious but honorable mercenary group that made up one side of the Mandalorian Civil War (one of many). It’s Jaster who established the Mandalorian reputation as bounty hunters. In a way, Din Djarin owes his way of life to Jaster.

This connection explains why Jango Fett was chosen as the base for the clone army. His Mandalorian traits (by upbringing, not by blood) made him the ultimate soldier and mercenary. And since cloning a Force-sensitive being is impossible — without horrible mutations — a Mandalorian is the next best thing.

Which brings us back to The Mandalorian.

Decades after the first clone army was established, the Empire moved to conscripted soldiers because the cost of cloning was prohibitive. But following the Empire’s collapse and Palpatine’s apparent death, it’s possible the remaining forces could give cloning another shot. And with Grogu safe and secure with Luke Skywalker, perhaps Moff Gideon will shift the focus of his cloning experiments to another Mandalorian foundling: Din Djarin.

Mandalorian foundlings are obviously hard to come by, and Din could provide a fresh model to create an army in the image of the original — assuming Gideon can get his hands on Din Djarin in the first place. But if he does, it’s hard to imagine anything more formidable than an army of Mandos.

It may be too late for the Empire to figure out how to extract Force sensitivity from Grogu, but it’s never too late to go back to the original playbook.

The Mandalorian is now streaming on Disney+.