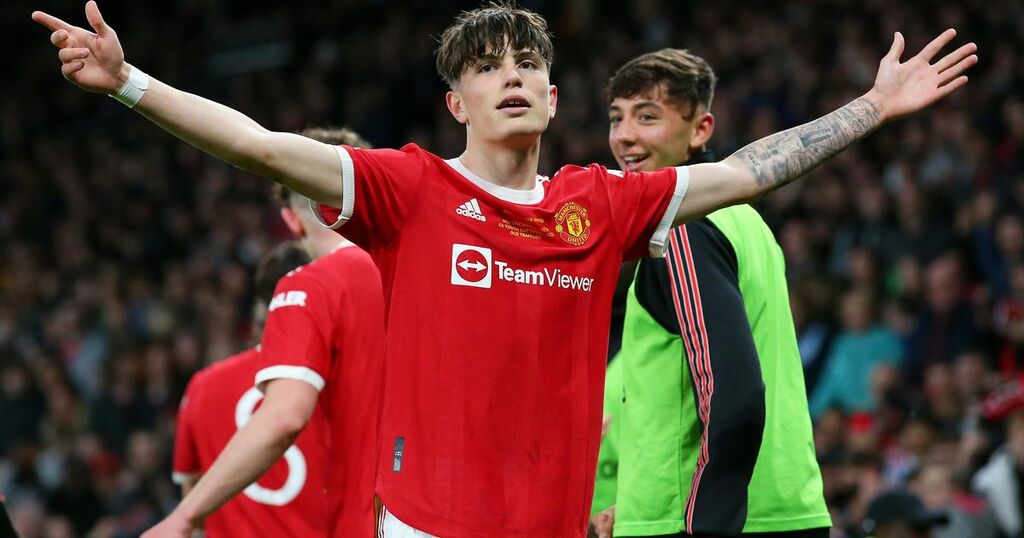 Nottingham Forest were beaten 3-1 by Manchester United in their first ever FA Youth Cup final. But the Reds Under-18s still produced a performance to be proud of at Old Trafford.

And the result wasn’t without controversy. Warren Joyce’s side had come from behind through Josh Powell, only to see their opponents retake the lead through a dubious penalty decision.

A bright start from both sides saw chances carved out at either end in the opening minutes. Aaron Bott was called into action early on, following a lovely bit of skill and a shot with the outside of his boot by Kobbie Mainoo. But the visitors went close soon after, with Jamie McDonnell heading narrowly wide from a corner.

It was a missed opportunity Forest were left to rue as United took the lead in the 13th minute. Bott got a hand to Rhys Bennett’s firm header from Sam Murray’s free-kick but couldn’t keep it out, leaving the Reds 1-0 down.

They responded in fine fashion, though, growing into the game and embracing playing in front of a record crowd. And they forged some good opportunities.

Powell had a shot charged down and Dale Taylor forced a save from Radek Vitek with an acrobatic strike. Then, with almost 20 minutes gone, Justin Hanks had a golden chance to draw level, sending a free header over the bar from Powell’s corner.

Alejandro Garnacho curled wide for the hosts as half-time approached. But just before the whistle, Forest got the goal they were looking for.

Vitek was left being consoled by his teammates after Powell found the bottom corner with a well-struck drive from the edge of the area. Meanwhile, the away end of almost 5,500 Reds fans erupted. And the goal was celebrated, too, by Forest representatives in the directors’ box, including chief executive Dane Murphy and first-team boss Steve Cooper.

Bott did well to keep out a well-struck attempt by Marc Jurado soon after the restart, while Detlef Esapa Osong tried his luck for the away side. After coming under pressure for a spell, it was the Reds who began pushing for the winner.

But the hosts reclaimed the lead in the 77th minute, in controversial fashion. A penalty was given for Zach Abbott’s trip on Garnacho, with replays showing it was clearly outside of the area. Still, the United man stepped up and coolly slotted past Bott.

Deep into added time, Garnacho then wrapped up the win with a bit of individual skill to make it 3-1. Here’s how Reds reporter Sarah Clapson rated the Forest players at Old Trafford.

Aaron Bott: Made some strong saves when he needed to. Didn’t have much chance with the goals conceded, though. Rating: 7/10

Zach Abbott: Can feel really hard done by with the penalty decision given against him. Trip on Alejandro Garnacho was very clearly well outside of the box. Rating: 7/10

Kyle McAdam: Got a chant of ‘are you Psycho in disguise’ as he tried to gee up the away fans before half-time. He’ll have enjoyed that. Showed a lot of spirit. Rating: 7/10

Ben Hammond: A solid display defensively, helping to keep the hosts at arm’s length for long spells. Good at helping to get the Reds on the front foot, too. Rating: 7/10

Pharrell Johnson: Confident and comfortable on the ball. Seemed to thrive on the big occasion once Forest grew into the game. Rating: 7.5/10

Justin Hanks: Had a good chance to get on the scoresheet with a header in the first half. Contributed to some nice attacking moves. Rating: 7/10

Josh Powell: A special moment, scoring in the FA Youth Cup final at Old Trafford. And no less than he deserved, just a real shame it didn’t count for anything in the end. Rating: 8/10

Jamie McDonnell: Beamed with pride as he walked the team out, and led by example all evening. A really accomplished performance to boot. Rating: 8/10

Detlef Esapa Osong: Kept the United defence on their toes throughout. Terrific work-rate, even if he didn’t get too many clearcut chances. Rating: 7/10

Dale Taylor: Has bags of potential and embraced playing on the big stage. Didn’t go his, or Forest’s, way on this occasion - but the future is bright. Rating: 7.5/10

Sam Collins: Had plenty of bright moments as Forest played some lovely flowing football. Brought off when it looked like he had picked up a knock. Rating: 7/10

Ben Perry (for Collins, 73mins): Some nice moments on the ball. A good experience, regardless of the final result. Rating: 6/10

Joe Gardner (for Hanks, 82mins): Plenty of effort during his short time on the pitch. Harsh that the game went away from the Reds in the closing minutes. Rating: 6/10

Aaron Korpal (for McDonnell, 90+1mins): Didn’t really get chance to make an impact as United wrapped up the win. Rating: 6/10

Have your say in the comments below