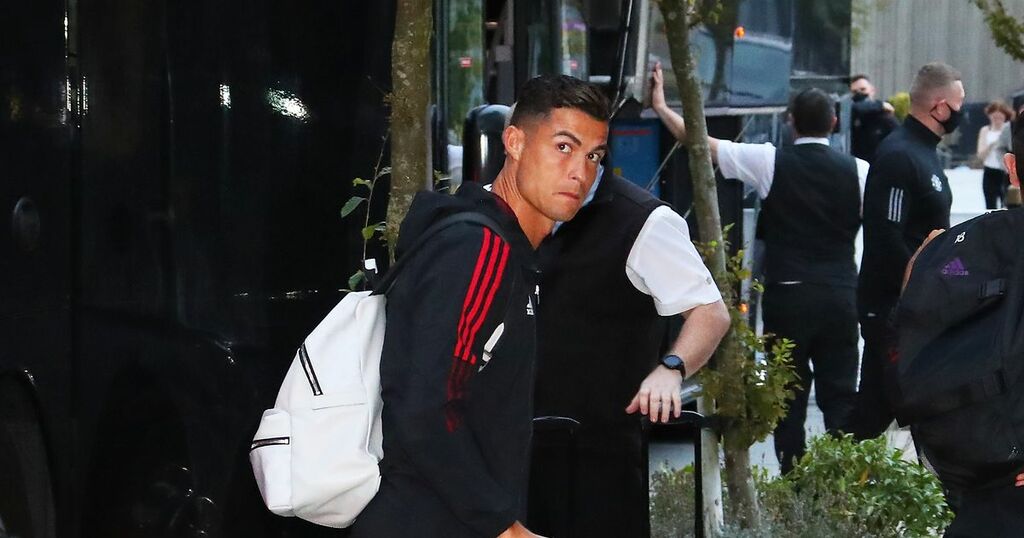 Cristiano Ronaldo has arrived with the Manchester United squad at their pre-match hotel ahead of the Premier League visit of Newcastle.

Ronaldo arrived at The Hyatt Hotel in Manchester city centre on Friday night with the rest of the squad to prepare for what is expected to be the 36-year-old's second United debut. Onlookers say only around 10-15 supporters were gathered outside the hotel to greet Ronaldo.

United manager Ole Gunnar Solskjaer has confirmed Ronaldo will feature against Newcastle but stopped short of confirming if he would start.

Ronaldo is expected to line up for United, having scored twice for Portugal last week in their World Cup qualifying comeback win over the Republic of Ireland. Ronaldo celebrated his 96th-minute winner by whipping off his shirt and receiving a yellow card, which meant he was suspended for the midweek trek to Azerbaijan.

The Portuguese Football Federation agreed to release Ronaldo from their squad early and he flew to Manchester last week.

"He's been good," Solskjaer said. "Of course, we've followed his career from afar since he left here. I think everyone's very, very happy to have him back. He can speak for himself but he seems happy to be back as well. The mood's been very good, working well and we're looking forward to Saturday.

"He's been having a good pre-season with Juventus, he's played for the national team, he's had a good week with us here. He'll definitely be on the pitch at some point, that's for sure.

"I wasn't confused when I spoke to you [at the last pre-match press conference]. You were confused, I was quite happy at that moment but couldn't say everything.

"Cristiano coming back in, just the way he's conducted himself this week, he's come in, we know what he's achieved in his career but he's come here to achieve more.

"He's lived his life with the discipline of a top, top professional. Ever since I came here, he was the first one who did prep well, every day, 45 minutes before the training session and we started looking at this kid doing all of this before training, and he'll have an effect on all of the players.

"We've grown as a group the last few years. The determination, the desire, the focus, has improved over time, bit by bit. Like bringing Raphael in, he's brought a winner's mentality, unbelievable focus. And then Cristiano comes in as well. There's no place to hide with winners like them, you can't go into training with 95% and not being focused. That's what he demands of himself and everyone else. It's been great having him in.

"Everyone evolves and develops throughout their career. Cristiano is a different player to one who left but he's in such good nick still and he will be looking in the next few years to play as much as he can, to score as many goals as he can, he's a threat from direct set-plays himself, but also to be on the end of crosses and he's adding something extra.

"We don't have his skill-set in the team, the mix of his. No one has, really! He is one of the best players that's ever played the game."

Solskjaer was on the pitch when Ronaldo emerged for his United bow as an 18-year-old against Bolton in 2003 and a fellow starter on Ronaldo's full debut against Wolves.

The pair played alongside each other in the 2006-07 season when Solskjaer recovered from a knee injury and Solskjaer is relaxed about the dynamic of managing a former teammate.

"That's fine. We've got mutual respect for each other, who cannot have respect for what he's achieved in his career? But he knows I've got to make the decisions when to play him, when not to play him. It's my job to manage him and that we get the best out of him.

"I wanna see the best out of Cristiano and that comes from communication with him. We spent a few years together at the club, we know each other. He doesn't need me to tell him what to do, he's always had the determination and desire to be the best and he still has.

"In my career, the ones I've played with, he's the one I've seen that's prepared and taken steps he needed to. Ryan Giggs played until 40 and I'm not gonna be surprised if Cristiano ends up with the same age as Ryan."

Note: United later confirmed Fred had been cleared to play and is expected to link up with the squad