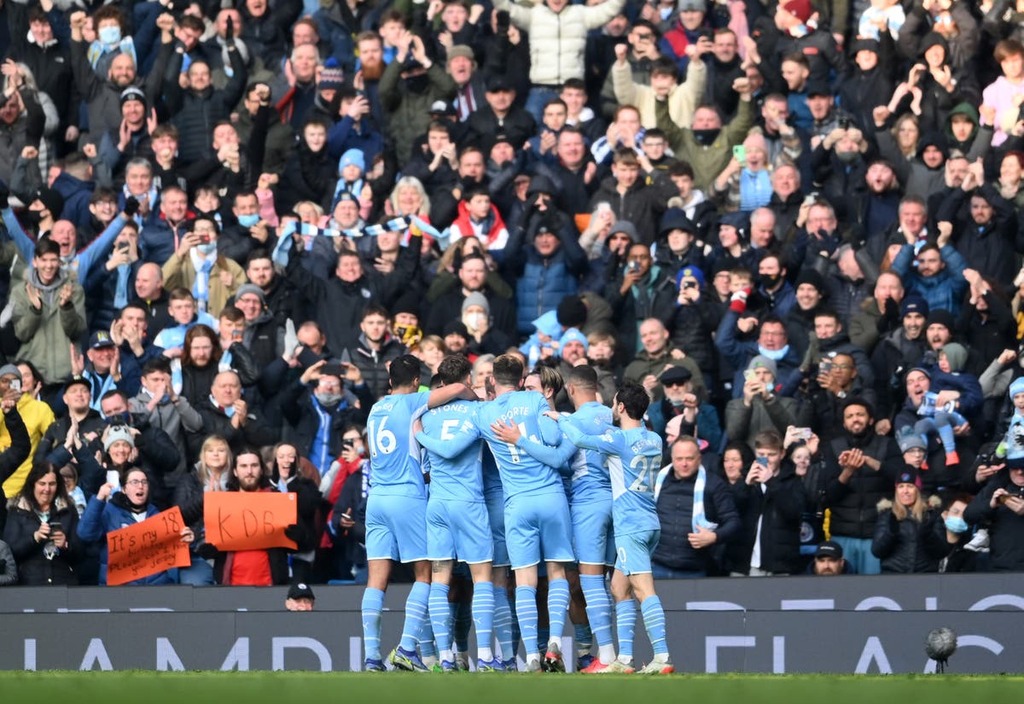 Manchester City increased their lead at the top of the Premier League table to 13 points as Kevin De Bruyne’s strike earned the defending champions a 1-0 win over second-placed Chelsea.

City dominated possession in the first half but Jack Grealish was denied an opening goal when Kepa Arrizabalaga blocked his shot with an outstretched leg. Romelu Lukaku went close after the break but saw a curling effort saved by Ederson.

The hosts took the lead in the 70th minute when De Bruyne curled in an excellent strike past Kepa from outside of the box,

Chelsea continued to struggle to create chances, despite the introduction of Mason Mount and Timo Werner from the bench, and the defeat is a significant blow for their hopes of challenging for the title.

Here are five things we learned.

City closing in on Premier League

This was a performance from Manchester City which made clear why they are running away with the Premier League title this season.

City were completely dominant here, with their press smothering Chelsea, and they made the European champions look average.

De Bruyne’s goal was a stunning way to wrap up three points and the Belgian midfielder was awarded man of the match. The fact that City are already so far clear, with De Bruyne only hitting peak form over the last couple of weeks, shows just how good they’ve been elsewhere.

In extending their lead at the top of the table to 13 points, this is victory that surely sees Pep Guardiola’s side place one hand on the Premier League title.

This was another curious performance from Chelsea. The match here played out in a similar fashion to the return fixture in September, with Manchester City having complete control of the possession. Chelsea looked to create turnovers in midfield, with Kovacic and Kante pushing high when they sensed opportunities, but then were happy to drop deep once City established their attacking shape.

That defensive work from Kovacic and Kante led to Chelsea getting into a couple of of promising positions early on - with Lukaku choosing the wrong option when he tried to slip in Ziyech, and Ziyech overhitting a pass into Lukaku when he had space to run into. But Chelsea were so sloppy in possession - albeit in the face of a ferocious City press - that they failed to have a shot on target in the first half of a Premier League game for the first time under Tuchel.

Once again, we come away from a Chelsea match with Romelu Lukaku being the dominant issue. City’s control left the striker isolated for much of the match and Lukaku struggled to lead the line - but there are questions to be asked of Tuchel too.

While it’s fair to highlight that Lukaku was below his best, it didn’t help that apart from when Chelsea won the ball in midfield, a lot of their passes failed to advance them up the pitch and they turned to playing long and direct to the Belgian.

Lukaku did not receive much support from Ziyech or Pulisic when he did have his back to goal, but his deployment as a ‘target man’ is unlikely to make Lukaku feel any happier about his situation at Chelsea.

As we saw repeatedly at the Euros and for Inter Milan last season, Lukaku carries much more threat when he is able to turn and run into open space, particularly down the sides of the opposition.

Chelsea did this once - again after Kovacic won a ball in the final third - with Lukaku seeing his effort on goal telegraphed by Ederson after being slipped through.

Sterling back on form

Lining up alongside Phil Foden and Jack Grealish in an all-English front three, it was Raheem Sterling who was by far City’s most threatening forward.

This was as sharp a performance as Sterling has produced for his club this season and the 27-year-old looking on it from the opening stages.

He gave Marcos Alonso a torrid afternoon at times and his movement and dribbling on the right channel was incisive, direct and dangerous.

Foden performed well in a false nine role that is becoming his own, even if he was perhaps the quietest of City’s forwards. Grealish saw more possession, and had City’s best chance of the first half, but this was another difficult afternoon for the club’s record signing.

This was a poor afternoon for Chelsea but Mateo Kovacic came away from the Etihad as perhaps the only Blues player to have had an effective afternoon.

His role as a high-pressing ball-winner in Chelsea’s midfield was the source of most of their promising situations in the first half and the Croatia international was able to disrupt Rodri and Bernardo’s passing at times with his energy and tackling.

Kovacic was badly missed during Chelsea’s poor run of form in December and his performance here was a reminder to how important he was earlier in the season.