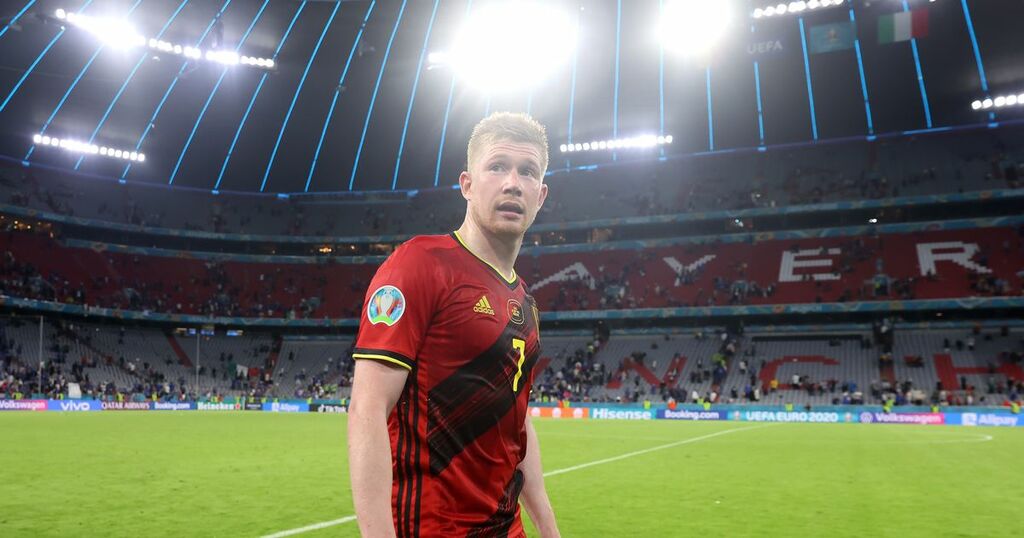 Speaking to Belgian newspaper HLN, the Manchester City star revealed he played in the Euro 2020 quarter-final against Italy with painkilling injections, something that might have actually exacerbated his ankle injury.

"I knew immediately that my ankle was bad after that tackle against Portugal," De Bruyne said. "I played against Italy with two injections. If I had known beforehand what my ankle would have been like [it was] afterwards, I would not have played football."

Had De Bruyne sat out that match, he might not have suffered the discomfort in his ankle that saw him miss much of the first month of City's season.

Of course, we have the benefit of hindsight, but was he wrong to take the decision he did?

I mean, is this even a debate?

One of the most talented footballers in the world who's suffered a number of injury problems over recent years is taking painkilling injections just to represent his country at one tournament.

First of all, it's not lost on me that it's a little blasé to just refer to a European Championship as 'one tournament' - every player strives to represent their country and deliver success, and that hunger will naturally be increased when a country like De Bruyne's native Belgium have waited so long to earn major honours.

However, De Bruyne could have done serious damage to his body and thus jeopardised his ability to represent City - the team who pay his wages - for the remainder of his contract with the club (a contract which still has four years to run, by the way).

The Belgian star will be 31 by the time the 2022 World Cup comes around, meaning he'll almost definitely be afforded another chance to play for his country at a major tournament, unless he gets injured, of course, but at least he's being sensible and not increasing the risk of getting injured by taking painkilling injections to play through the pain caused by existing knocks...

It's completely understandable that De Bruyne wanted to represent his country in the quarter-final of a major tournament, but it certainly wasn't worth risking his capacity to play a full part in all that is yet to come at City.

I'm going to be totally selfish here and say De Bruyne is one of the most majestic players I've ever seen play in the Premier League and the thought of him jeopardising the rest of his career just isn't nice.

Please don't do that again, Kevin.

From his own and City's perspective, De Bruyne was right to play against Italy.

From a player welfare perspective, that seems an irresponsible line to take, but in the context of a major tournament, it's hard to say otherwise. Belgium's doctors and physios will no doubt have conducted multiple tests on De Bruyne's ankle prior to the Italy game and advised him that he could play.

Yes, they obviously had a motive to get their best player on the pitch, but in these situations, you have to trust players to know their own bodies. Ankle injuries and the like are not like concussions or head injuries, where decisions sometimes have to be taken out of players' hands.

The career of a professional footballer is a short one, meaning chances of international glory don't come around very often. Having experienced the disappointment of losing in the semi-finals of the 2018 World Cup, De Bruyne was understandably desperate to try and help his team go one better at Euro 2020. Of course, it didn't work out, but who could have denied him the chance to try?

Certainly not City. Yes, the club pays his wages so should have some say over his welfare, but players playing in major tournaments is a good thing for clubs.

A player returning for pre-season after success on the big stage will be more motivated than ever to carry on progressing and winning. Pep Guardiola, while he may be annoyed about De Bruyne's injection decision, knows this better than most. In 2008, after Barcelona barred Lionel Messi from playing at the Beijing Olympics, Guardiola intervened and made sure his fledgling star travelled.

Football clubs pay their players as employees; they don't own them. If De Bruyne decides to risk his own health in pursuit of international glory, then that's his choice and we should respect it.

Do you think De Bruyne was right to play through the pain? Follow our City Is Ours team - Ross Jackson and Alex Brotherton - on Twitter to get involved in the discussion and give us your thoughts in the comments section below.