Manchester City have pipped Liverpool to the Premier League title after an extraordinary comeback to beat Aston Villa on a dramatic final day of the 2021/22 season.

City went into the last round of fixtures on Sunday holding a slender one-point advantage at the summit, but trailed 2-0 with less than 15 minutes to play at the Etihad Stadium after shock goals either side of the interval from Matty Cash and ex-Reds star Philippe Coutinho.

However, the determined leaders hit back with three goals in five incredible second-half minutes to completely turn the match around, with influential substitute Ilkay Gundogan nabbing a decisive brace and fellow midfielder Rodri also side-footing home in stylish fashion.

That amazing comeback was crucial as Liverpool staged their own late fightback to beat Wolves 3-1 at Anfield, with City eventually clinching their fourth title in five years by a single point.

It is their eighth top-flight title overall, sixth in the Premier League era and fourth under Pep Guardiola, who was left in tears of joy and disbelief as jubilant home fans poured onto the pitch after the final whistle. It is Guardiola’s ninth major trophy of his successful six-year City tenure.

There were some unsavoury scenes during that pitch invasion, however, with one of the Etihad goals torn down and Steven Gerrard later claiming that Villa goalkeeper Robin Olsen was “attacked” by City fans.

Liverpool have been denied a famous and unprecedented quadruple, though the FA Cup and Carabao Cup winners can still claim their third major trophy of the season when they battle Real Madrid in the Champions League Final in Paris next weekend.

Despite the dramatic nature of proceedings, City were never moved out of top spot during a pulsating afternoon.

However, a draw for the Reds would still have seen City crowned champions on goal difference in rather anticlimactic circumstances despite a potential shock loss against Villa.

By the time substitute Mohamed Salah finally put Liverpool in front with six minutes to go on Merseyside, City had already notched all three goals in their staggering comeback.

Andy Robertson added another in the closing stages at Anfield, but Liverpool were ultimately denied their second top-flight win in three years and now have to quickly dust themselves down for another huge European occasion at the Stade de France in six days’ time.

For City, meanwhile, tomorrow will see the club celebrate their latest title success with an open-top bus parade, starting at Exchange Square at approximately 6pm BST.

The bus will then head to St Mary’s Gate and south on Deansgate, before a stage celebration takes place at Beetham Tower. 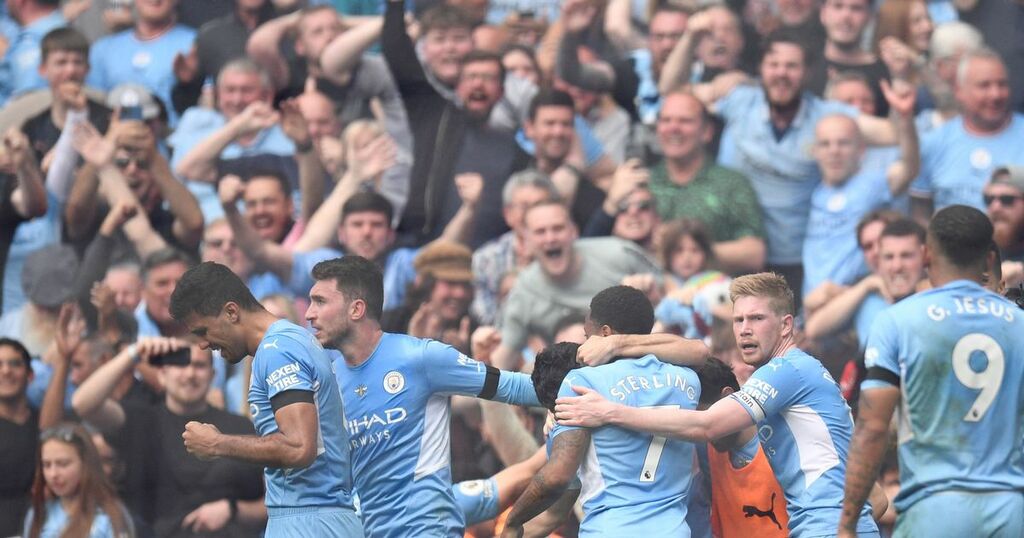