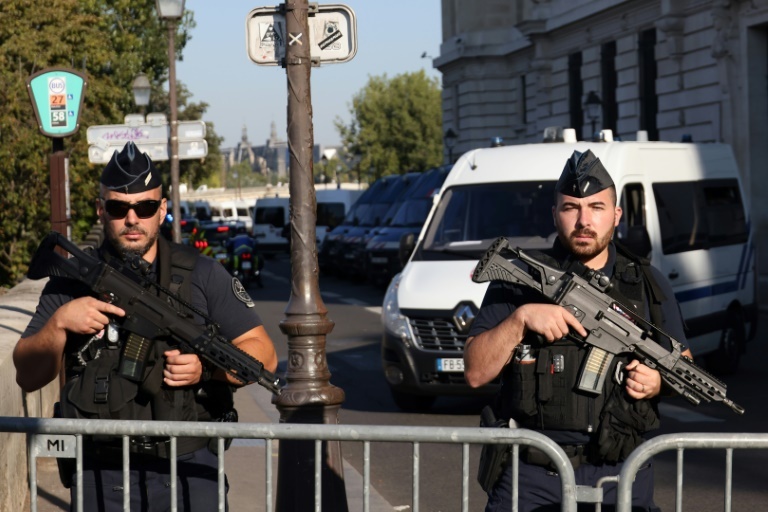 Paris (AFP) - The main defendant in the trial over the November 2015 attacks in Paris disrupted proceedings Thursday with a new outburst in court, claiming three of his co-accused knew nothing about the jihadist plot.

Salah Abdeslam, the sole survivor of the group that killed 130 people, went on trial with 19 others Wednesday over the November 13, 2015, suicide bombings and gun assaults on bars, restaurants, the Bataclan concert hall and the national stadium.

"They helped me but they knew nothing at all" about the attacks plot, said Abdeslam, 31, of the three fellow accused.

"They are in prison but did nothing," he added before his microphone was cut by the presiding judge Jean-Louis Peries, who then suspended the hearing.

It was the second such outburst by Abdeslam, who on the first day of the landmark trial on Wednesday launched into a diatribe about how he and his co-accused were being treated "like dogs" in prison.

On this occasion, he intervened while the court was considering the admissability of the complaints brought by certain plaintiffs in the case.

"The victims from Syria and Iraq -- will they be able to speak?" asked Abdeslam, his dark hair combed back, and wearing a white sweater with coloured stripes.

"In principle, we should be presumed innocent before being judged...even if I do not endorse your justice," he said.

"Let's leave this discussion, Mr Abdeslam," replied the judge."Sir -- don't be selfish.There are other people who want to hear me," Abdeslam retorted.

Abdeslam's outbursts in court have sharply contrasted with his refusal over the last year to give any statements to investigators, always remaining silent.

Peries commented: "You have had five years to comment, you did not wish to make statements -- as is your right.I understood now that you wanted to speak, and that's fine -- but now is not the time."

The trial, which is expected to last nine months, is the biggest in France's modern legal history and sees the 20 defendants facing sentences of up to life in prison, including Abdeslam.Six of the suspects are being tried in absentia.

Abdeslam's apparent desire to steal the limelight risks becoming a major headache for the court as it seeks to set up the marathon process and prepare for the testimony of survivors and relatives of the dead from September 28.

"Why would he miss this chance to speak?He is an IS fighter, after all," said lawyer Samia Maktouf, who represents 40 plaintiffs in the trial.

"But it is offensive to the victims, it is shocking the impact that these remarks have on the victims," Maktouf said.

On the first day Abdeslam stated his Islamic faith when asked to identify himself and then replied that he was a "fighter for the Islamic State" when asked for his profession.

"Here it is very beautiful, there are flat screens, air-conditioning, but there (in prison) we are mistreated," he alleged.

Abdeslam, a dual French-Moroccan national, was captured in Brussels after allegedly discarding his suicide vest and fleeing the French capital in the chaotic aftermath of the bloodshed.

The horror was unleashed late on Friday, November 13, 2015, when the first attackers detonated suicide belts outside the Stade de France stadium where then-president Francois Hollande was watching France play a football match against Germany.

A group of gunmen later opened fire from a car on half a dozen restaurants, and Abdeslam's brother Brahim blew himself up in a bar.

The massacre culminated at the Bataclan, where 90 people mostly in their 20s and 30s were massacred as they watched a rock concert.

The trial will last until May 2022 with 145 days of scheduled hearings involving about 330 lawyers and 300 victims.