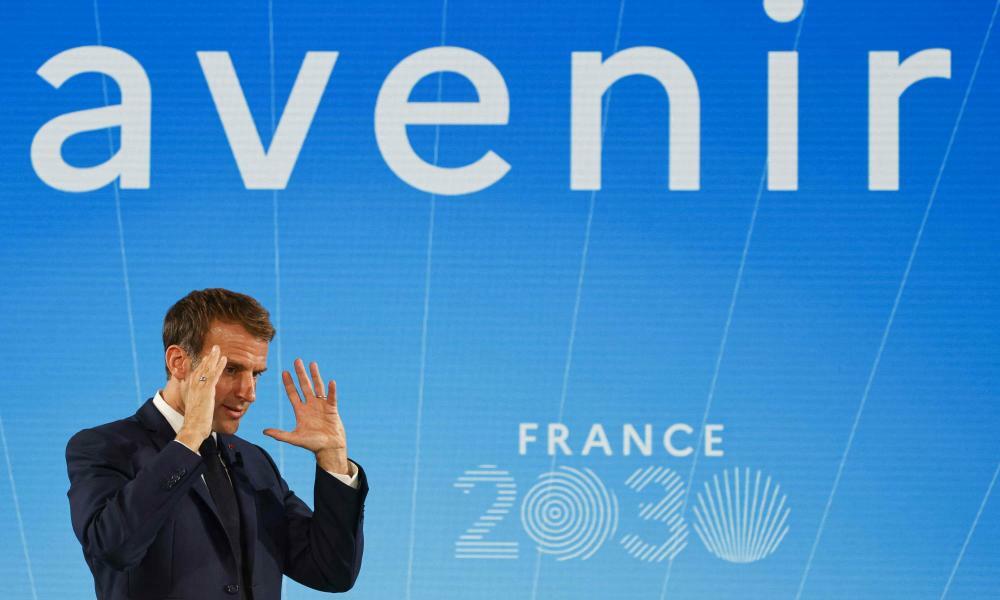 Emmanuel Macron has given a taste of his likely re-election bid by announcing a €30bn (£25.4bn) plan to “reindustrialise” France and make it a global leader on green hydrogen, create new, smaller nuclear reactors and invest in French television series and video games to challenge foreign offerings on platforms like Netflix.

Macron, who is expected to run for re-election in April but will not launch his campaign until next year, used a 90-minute speech at the Élysée to outline his long-term plan for French innovation in 2030. He sought to reconnect with his promise in the previous election to build a “start-up nation” – deliberately focusing on his favoured topic of the economy in an attempt to contrast with the right and far-right, who are concerned with identity and immigration, while the left is focusing on working hours and salary increases.

The centrist Macron said France needed to act fast to make up for a lack of investment in the past and must innovate to become a global leader on green energy, decarbonise its industry and bring production closer to home in significant areas such as biomedicine and semiconductors.

“We must wage the battle of innovation and industrialisation at the same time,” he told a group of entrepreneurs and students gathered at the Élysée. “We need a country that produces more.”

Macron said the Covid-19 pandemic had “put us face-to-face with our vulnerabilities”. He said: “Eighteen months ago, we faced a lack of face masks, no one ever thought France could lack face masks.” He said France must work towards productive autonomy at home and in Europe in a broad area of new industries.

After the global coronavirus outbreak, French pharma firms were unable to produce a vaccine, unlike the biotech startups BioNTech and Moderna.

France must invest heavily in medical research, Macron said, and aim to develop at least 20 biotech drugs against cancers, as well as against emerging and chronic illnesses, including those associated with ageing.

The president used the speech to state his support for nuclear energy, which accounts for about 70% of French electricity and has become a point of fierce debate in the run-up to next year’s election. Green politicians want France to move fast to end its dependence on nuclear, highlighting the large amounts of radioactive waste it produces as well as safety issues.

Politicians on the right and far-right want more reactors. Macron said France would invest €1bn by 2030 in “disruptive innovation” to produce atomic power, which he said would focus on designing small nuclear reactors with improved waste management.

He added that France should be able to produce 2m electric and hybrid cars by 2030 and build a low-CO2 aeroplane during the same timeframe.

In terms of French soft power, Macron said the writing and development of series for streaming was of utmost importance from a civilisational point of view. He said if viewers using platforms such as Netflix and Amazon were only able to choose content “by other big powers, our stories will be lost”.

Macron said more money must be allocated for French screenwriting as well as for technicians and the creation of big studios. He said the state would offer public funding in the cultural sector, which should be followed by massive private investment.