Mackay doctor suspended over complaints of patient harm during caesareans

By Janelle Miles and Elizabeth Cramsie 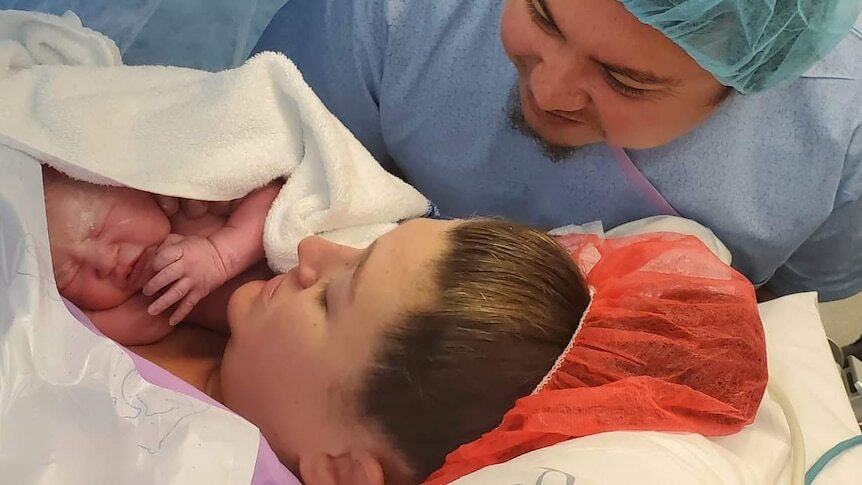 A doctor has been suspended after complaints from women who claim to have had complications after caesareans at Mackay Base Hospital.

"I can advise that I have been informed this morning that the Mackay HHS (Hospital and Health Service) has put out a statement about their independent clinical review that they're undertaking, and they've also advised that there is one doctor that has been suspended," she said.

Since she was told about the complaints last week, Ms Davies Jones has written to staff reminding them about "Communicating for Safety".

"If a situation doesn't feel right in respect to patient care, no matter who you are, please speak up for safety," she said in an email, obtained by the ABC.

"Please feel confident to escalate concerns to your line manager. If you feel you have not been heard please contact me directly."

Ms Crosby said more women have approached her with concerns about their birthing experiences at the Mackay Base Hospital since the ABC revealed the independent review had been launched.

'No feeling in my left leg'

In one case, a 27-year-old woman said she developed severe weakness in her left leg after giving birth at the hospital, struggling to walk up and down stairs when she arrived home with her new baby.

Chanice Fishwick delivered her daughter Izabella Wills at the Mackay Base Hospital in January via a caesarean section, involving spinal anaesthesia.

After the surgery, Ms Fishwick said she had "absolutely no feeling in my left leg".

"I couldn't even lift it an inch off the bed," she said.

The mother of three said she was discharged after being told the problem "will wear off".

"My husband had to dress me as I couldn't even lift my leg to put clothes on," she said.

Ms Fishwick said she bruised her ribs after falling down the stairs at her home "a few times" and eventually moved house after another fall "with my baby capsule in hand".

She claimed the doctors at the hospital were dismissive of her problems.

"No-one would listen to me," she said.

"They just kept saying that I had issues beforehand. They did a nerve conduction study and MRIs (Magnetic Resonance Imaging scans) and couldn't find anything wrong.

"It would have been fine if they'd turned around and said it was our fault and we are sorry and this is what we can do to help."

'I still don't have answers'

Ms Fishwick said her leg had improved with physiotherapy but she was still unable to feel her toes and her leg still "gives way".

She is on a wait list for physiotherapy after moving from Mackay to Moranbah.

"My foot still lags and catches on steps sometimes and my leg will still give way at random moments."

Ms Crosby said patients who experienced an adverse event were entitled to an "open disclosure process".

"That should be instigated by the hospital," she said.

"But patients can also ask and should receive the process."

Open disclosure involves patients meeting with hospital hierarchy to give them the opportunity to ask questions, be given an apology and arrange help for any related medical problems.

The Mackay Hospital and Health Service is yet to release the terms of reference into its review into obstetrics and gynaecological services at the facility.

It has been contacted for comment on Ms Fishwick's matter.

A hotline has been set up for patients to provide feedback about obstetrics and gynaecological surgical services at the hospital.