The former Brexit minister, the architect of the 2019 withdrawal deal, said efforts to broker an agreement had "reached the end of the road". He urged the Prime Minister to act now to save the Union even if that meant "confrontation" with the EU.

Writing for The Telegraph, he said Sinn Fein's victory in last week's Stormont elections and the refusal of the DUP to enter a power-sharing agreement had "forced the Government's hand".

"The Government has no option now other than to act unilaterally to disapply part or all of the Protocol. The Belfast Good Friday Agreement, which the Protocol is supposed to protect, is on life support," he wrote.

"Sometimes governments and their leaders must just do the right thing. Fortunately, doing the right thing is usually also the best thing for our country.

"Boris Johnson and Liz Truss have shown they are leaders in Ukraine. They must now show the same determination in Northern Ireland and finally re-establish self-government for the whole of the UK.

"We may, of course, face EU retaliation, though it would be disproportionate to the trade involved, only arguably legal and entirely self-defeating. If it happens nevertheless, it will complicate things – but we should not fear it."

Lord Frost's intervention comes after a day during which strained relations deteriorated further, with Brussels saying any move to end border checks would be "simply not acceptable" and would "undermine trust between the EU and UK".

During a "tetchy" half-hour phone call with Ms Truss, the Foreign Secretary, Maros Sefcovic, the EU's negotiator, refused to consider tabling any new proposals and accused Britain of treating the talks as a sham.

A frustrated Mr Sefcovic later told reporters in Brussels that, instead of him budging, "the UK mandate needs to be expanded to contain political will to implement the protocol".

He claimed Ms Truss told him she planned to table legislation next week to override border checks and had rejected an offer of intensified negotiations he made in February. "It might have already been the plan at that time [that] the unilateral action is politically more feasible for the UK Government," he added.

Ms Truss told him the EU's approach was creating a "two-tier system" within the UK and would leave her with "no choice" but to unilaterally cancel large parts of the protocol.

She said she regretted that European leaders were not prepared to demonstrate more flexibility on red tape and that the bloc had a "responsibility to show more pragmatism".

A Whitehall source told The Telegraph: "Liz held her ground on the call and made the point that if the EU truly cares about peace, stability and the Belfast Good Friday Agreement then surely they can show more flexibility."

Mr Johnson told a meeting of the Cabinet in Stoke-on-Trent on Thursday that fixing the protocol was "an absolute slam dunk".

Speaking afterwards, he said: "There's one community in Northern Ireland that won't accept the way the protocol works at present – we've got to fix that."

It was reported on Thursday night that a delegation from the US Congress will fly to London within days amid concern in the White House about tensions over the protocol. The delegates will hold meetings in Brussels, Dublin, Belfast and London, the Guardian reported.

The protocol was agreed to prevent the need for goods checks at the land border between Ulster and the Republic by effectively moving the customs border into the Irish Sea.

But the level of red tape demanded by the EU on shipments arriving in Northern Ireland from Great Britain has spooked Unionists, who say they are being cut off from the rest of the UK.

Britain has since proposed a system of "green" and "red" lanes under which goods destined only for Northern Ireland would undergo light-touch controls to reduce the burden on businesses.

Brussels is open to the idea, but has been accused of an overly cautious approach to classifying which shipments are at risk of travelling onwards to the Republic.

Lord Frost insisted signing up to the protocol had been "the right thing to do", even though the Government had known it was "far from perfect". But he said the EU had since "weaponised it" and "refused to agree to anything that would meaningfully improve the situation".

On Thursday night he also told Joe Biden, the US president, to stop giving Britain "lectures" about the peace process after a State Department spokesman urged Number 10 to continue with the talks.

Delivering a speech to the Heritage Foundation think tank in Washington DC, Lord Frost suggested Mr Biden did not understand the "niceties" of Northern Ireland.

He said: "I get slightly frustrated when we are told by a third party, albeit a very important one in this context, how to manage these issues. It is our country that faced terrorism, faced the Troubles. We don't need lectures from others about the peace process and the Good Friday Agreement."

Robert Buckland, a former justice secretary,  told The Telegraph he would back the Government taking action to override the protocol, saying: "I would much prefer a negotiated settlement and the Government would too, but we can't just let things stand still.

"This is affecting lives and businesses in Northern Ireland and the Good Friday settlement itself. We have to take some action on the basis of respectable legal arguments."

But Mr Johnson can expect opposition from some Tory MPs if he goes ahead with new legislation, as well as attempts to frustrate its passage through the Lords.

"It's not a good look for a leading member of the international community and one of the permanent five members of the UN to sign a treaty and then promptly unilaterally disavow it," Andrew Mitchell, a former Cabinet minister, told The Telegraph.

"It would be much better for people of goodwill to negotiate a sensible compromise – but that does of course depend on goodwill on both sides." 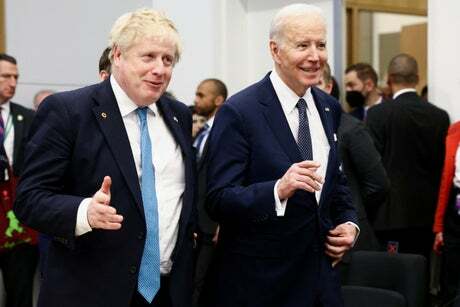