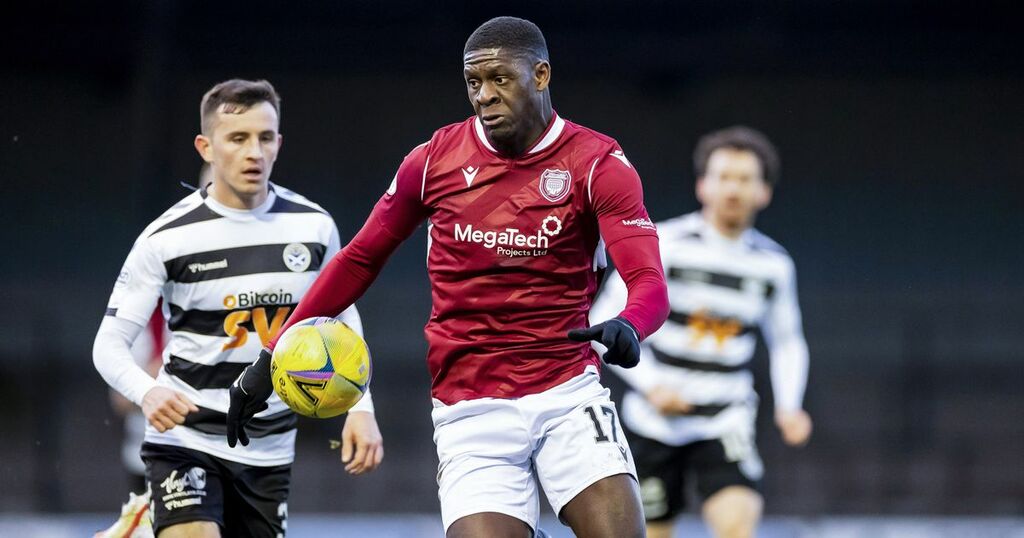 Joel Nouble has already become an Arbroath cult hero this season – now he’s ready to be a Livingston one as well.

But the striker knows he might have to bide his time before making his mark with the Lions.

The former Aldershot man has returned to the Tony Macaroni Arena following a hugely successful stint with the Red Lichties as he helped guide the part-timers to the top of the Championship.

His performances on the park and personality off it have made him a cult hero at the club – and he’s aiming to have the same impact at his parent club.

Speaking to the Courier, he commented: “I loved my time at Arbroath. It’s a wonderful club and the way the supporters took to me was unbelievable. It was special.

“The aim when I went there was to make it impossible for Livingston not to recall me in January and I’m happy that I was able to do that and perform well.

“If you asked me six months ago if I’d become an Arbroath cult hero, I definitely would never have seen that coming but I’m really happy with how my time at the club went and it’s now about showing I can perform at a higher level in the Premiership with Livingston.”

He added: “It’s a really strong squad at Livingston so I’m under no illusions as to how tough it will be to get games.

“Everyone wants to play 90 minutes every week but if I have to bide my time and wait for my opportunity then I’ll do that and I’ll keep working hard and giving everything in training.

“I’ll be ready to make the most of my opportunity when it comes.”

Nouble believes he’s been able to experience the best of both worlds during his stint with Arbroath as he was playing every week in the second tier while training every day with Livingston.

That, he says, stands him in good stead to hit the ground running for the Lions. He commented: “Going on loan to a part-time club was perfect for me because I got to train every day and be full-time with Livingston.

“I know the demands put on us by the coaching staff so I’m not coming in blind-sided and trying to figure everything out because I’ve been away from the club for six months.

“I think that has helped me massively and kept me feeling part of the squad. Hopefully now I can kick on and help us be successful for the rest of the season.”

Livi return from the winter break on Tuesday night when they host Dundee in a Premiership clash.