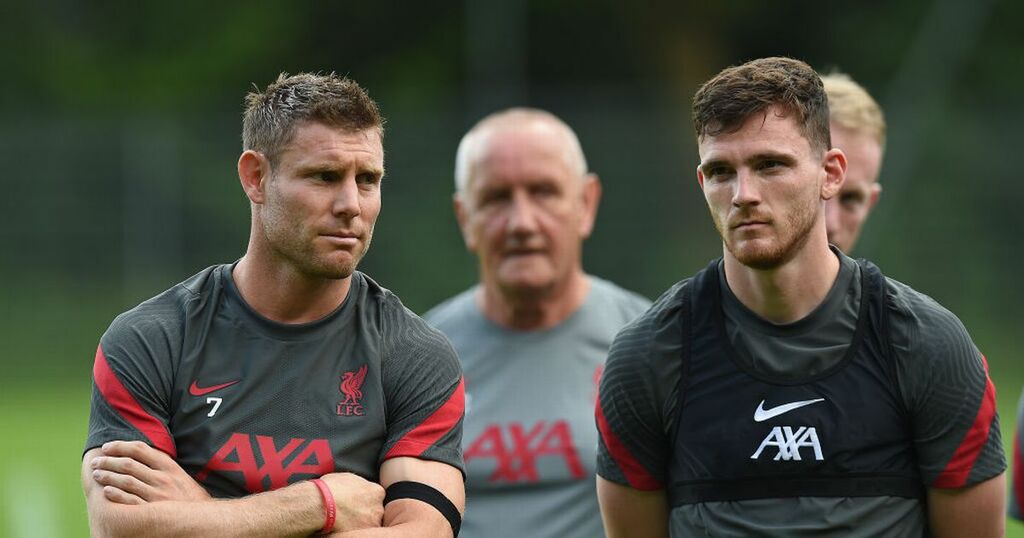 Paul Gorst - 'Thiago and Fabinho partnership should be kept'

The busy end to September starts at Anfield and, to quote Jurgen Klopp, the “proper Champions League” is back.

For the first time in too long, a full house is expected for a European night, giving the Reds their X factor back in pursuit of continental glory.

That could be vital when the Reds entertain AC Milan for the first ever meeting of two powerhouses outside of Champions League finals.

Alisson Becker starts in goal behind a back four of Trent Alexander-Arnold, Virgil van Dijk, Joel Matip and Andy Robertson.

In midfield, Jordan Henderson returns in place of the sadly stricken Harvey Elliott as the captain is named alongside Thiago Alcantara and the peerless Fabinho for just the second time ever in a starting Liverpool lineup.

Yep, football's best pre-match anthem is back at Anfield, this time with supporters inside able to listen to it for the first time in more than 18 months.

And with AC Milan the visitors, it's an historic occasion for Liverpool.
The team Jurgen Klopp picks is likely to be strong, and I'd be doing likewise.

In defence, the temptation to rotate at least one of Joel Matip and Virgil van Dijk will have to wait for a few more days at least as they start at centre-back.

Alisson Becker and Trent Alexander-Arnold also remain. But I'd give Andy Robertson a rest and look to Kostas Tsimikas at left-back.

Up top, no change as Diogo Jota leads the line with Mohamed Salah and Sadio Mane either side.

The intrigue could well come on the bench - will Liverpool include a recognised striker this time? I would.

Liverpool vs AC Milan. Two European heavyweights, boasting 13 European Cups between them, battling it out in front of a sold out Anfield.

Phwoar, this is what we’ve been waiting for during these past 18 months of pandemic football, isn’t it? The Champions League is well and truly back!

And while this Milan side, sadly without Zlatan Ibrahimovic, don’t boast the A-list superstar names that Il Rossoneri could call upon in those famous finals back in 2005 and 2007, Jurgen Klopp won’t be taking anything for granted as the Reds kick things off in this group of death.

With that in mind, this Liverpool team pretty much picks itself as the Reds call upon all their Champions League-winning experience and go full-strength.

The back five, as you were. If it ain’t broke, don’t fix it and Joel Matip has more than cemented his place as Virgil van Dijk’s centre-back partner during this opening weeks of the season.

Diogo Jota wasn’t at his best against Leeds United, but with Roberto Firmino still missing the Portuguese is the obvious man to lead the attack alongside Mohamed Salah and Sadio Mane.

And Jordan Henderson returns in midfield to captain the side. I do feel he would have started this one anyway even if Harvey Elliott hadn’t picked up that shocking ankle injury at the weekend, with Fabinho and Thiago Alcantara making up the engine room.

Tom Cavilla - 'James Milner gets the nod in midfield'

The Liverpool players will be looking forward to this throwback fixture at Anfield this evening.

AC Milan have improved significantly as a side in recent seasons and will pose a real threat to the Reds this evening.

Like Liverpool, the Serie A have enjoyed an unbeaten start to the season and will enter this match high on confidence.

While you could make a case for handing a debut to Ibrahima Konate to give Virgil van Dijk a rest, the Reds don't want to take any chances and must get off to a good start in the group.

One player I would change in the defensive unit, however, is Andy Robertson.

Kostas Tsimikas has already proven he can successfully deputise for the Scot and should be trusted again to ensure Robertson is in top condition ahead of the weekend.

In midfield, I would recall captain Jordan Henderson as well as handing a start to James Milner.

The 35-year-old was Liverpool's best player on the pitch in their last Champions League outing, at home to Real Madrid in last season's quarter-final second leg, and can offer cover for Thiago.

Deciding the front three should be more straightforward, with Mohamed Salah, Diogo Jota and Sadio Mane leading the line.