Throughout his whole lifetime as a Bills fan, David D’Angelo has only ever left one game early. He and his two sons were all soaking wet by the third quarter, watching their favorite team play, bluntly, horrible football in the pouring rain and sleet. D’Angelo would go on to give up his season tickets the next year, saying goodbye to 23 years of loyal attendance at Highmark Stadium. But he had already passed on his fandom to his family—or rather, they had no choice and were born into it, says his daughter Britini—creating a whole new crew of Bills fans ready to embrace the Bills Mafia when it finally came along.

D’Angelo pinpoints the true start of the Bills Mafia to align with when Josh Allen came to town. He compares Buffalo’s energy today to when Jim Kelly took the team to a record four consecutive Super Bowls in 1991–94—but better. With Allen, he says, fans can see that the quarterback loves Buffalo; Allen has made it clear that he wants to be in New York and play with the Bills, and that makes all the difference for the community. (It doesn’t hurt that his accuracy has improved immensely, D’Angelo adds.)

The 25-year-old most recently went viral for dancing in the airport to get a flight upgrade, decked out in Bills clothing as she headed off to the season opener against the Rams. But her following was already well established after she appeared on season 23 of Big Brother. Now she’s taking her love for dancing, and the Bills, to a bigger platform of more than 350,000 TikTok followers.

From slamming through tables, to drinking out of bowling balls, to Pinto Ron, Bills’ traditions are unlike any other. But while the animated parking lot scene of today may seem next-level, Buffalo fans have always been tailgating: For as long as D’Angelo can remember, season-ticket holders have been at every game, starting outside the stadium and slowly making their way to their seats in what usually became an all-day event (though he admits in the Jim Kelly days, he often found fans passed out in their buses on the way in from the lot, which cut the day short).

“When I first gave up my season tickets, those first couple of seasons of not being there … seeing a home game on the television without me, knowing that I’m not there, that was hard,” D’Angelo says. “I was like, Now I know what it feels like to be one of the retired football players. I’m like a retired fan. And I’m watching it at home, and there’s a home game. I felt like I should be there.”

The one perk of watching Bills games from home is escaping the cold that tailgaters usually experience in Buffalo. Unless they’re using fire to keep warm (which fans know actually happens—D’Angelo watched a lit fan jump through a burning table at a tailgate), the essentials to bring to any Bills lot are thermal jackets, long johns and any team sweatshirt that can fit under an oversized jersey. Plus, the occasional pit stop to the stadium’s heated bathrooms doesn’t hurt.

The D’Angelos have what they describe as a “shrine to the Bills” in their basement: It houses all of their winter wear for games, plus signed jerseys, pictures and footballs, as well as a Bills-themed Christmas tree (which stays up for the whole year). When they all get dressed for games, Britini says, it’s her dad’s job to check they are wearing enough layers—and then in the car, there is always an extra layer, plus extra socks.

“When we leave the house, it’s Dad’s job to check us up and down and be like, ‘You’re not wearing enough layers.’ He’ll be like, ‘How many pairs of socks? Three? Add two more. How many shirts? Five? Add two more,’” Britini says.

Britini has had her go-to outfits for Bills’ tailgates and games picked out from an early age. As a little girl, she was either wearing a cheerleader costume or a jersey—and always completed the outfit with matching Bills-colored pom-poms, which she would carry down from her seat toward the stairs, cheering up and down in the season-ticket holder section. People always cheered with her, knowing she was D’Angelo’s daughter—and if anyone tried to complain, Big John (who sat in front of the family at every game) stepped in to stop them.

During her time on Big Brother, Britini was cut off from the outside world for the start of the 2021 season and, for the first time in her life, wasn’t able to watch Bills games. But this year, Buffalo fans everywhere are locked in, and Britini and the D’Angelos will be right there with them as they try to go all the way.

“It would mean so much to this town. I mean, I can already tell the difference in Buffalo in terms of like, us being able to come so close in the last four years. The fandom here has never been more vibrant,” Britini says. “I cannot even imagine what winning the Super Bowl this year would do for Buffalo.” 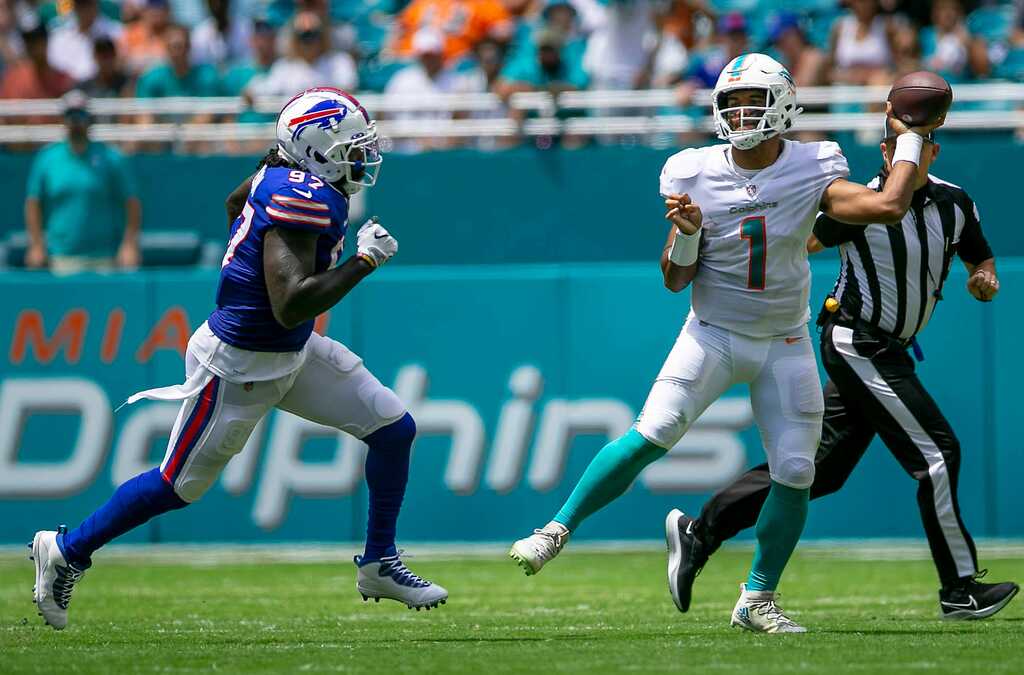 Josh Allen says he can relate to Tua Tagovailoa, is proud of him
Allen's situation wasn't too different from Tagovailoa's.

Keys to a Dolphins victory.

The NFL has a buzzsaw, and it lives in Buffalo.

USA Today Sports Media Group
Greg Cote: Everybody suddenly loves Tua & Dolphins, but can the bandwagon survive a Buffalo stampede?
MIAMI — Everyone must face their monster.

Miami Herald
One subscription that gives you access to news from hundreds of sites
Rodgers, Brady in spotlight but defense key in Packers-Bucs clash

Los Angeles (AFP) - It's a clash of superstar quarterbacks, but NFL Most Valuable Player Aaron Rodgers says defense will…