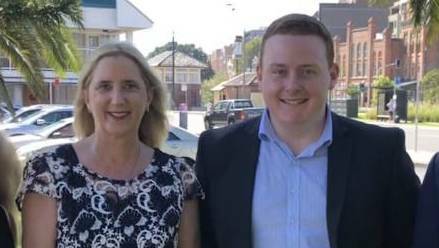 The Liberals announced on Thursday that Blake Keating, who lost two preselection ballots in July against Jenny Barrie to contest the lord mayoral and ward-two votes, would top their ward-one ticket on December 4.

Mr Buman, an at times controversial independent, threw his hat in the ring in August to contest ward one but was not endorsed by the Liberal state executive.

The party confirmed on Thursday that Ms Barrie would lead its ticket in ward two and challenge incumbent Nuatali Nelmes, Newcastle Independents candidate John Church and the Greens' John Mackenzie in the lord mayoral vote.

Katrina Wark, who ran against Newcastle MP Sharon Claydon in the 2019 federal election, will top the Liberal ward-three ticket, and University of Newcastle communications student Callum Pull is on top of the ballot in ward four.

Mr Keating is the president of the Australian Liberal Students Federation and a staffer in the Fairfield office of hard-right firebrand senator Concetta Fierravanti-Wells. He works for his family's wind-farm business, Zenviron.

Ms Barrie lost to Charlestown MP Jodie Harrison in the 2019 NSW election, eking out a 0.5-point swing. Mr Keating lost to Tim Crakanthorp in the same election, suffering a 10.3-point swing against the Liberals.

The Liberal candidate announcement follows a bruising preselection marred by accusations of sabotage and illegal donations.

Ms Barrie, who manages Electrodry Storage, said she would campaign on helping business recover from the pandemic and "stopping Labor from keeping control of council".

"The city cannot afford another term of this council being majority controlled by the Labor Party, with their cavalier attitude to transparency and ratepayers' money," she said in a party statement.

The Liberals' only incumbent councillor, Brad Luke, is stepping down from his ward-two post.

Mr Keating, who has a building and construction management degree and is completing a Masters in Applied Finance, will be pitted in ward one against Cr Church, Cr Mackenzie and Labor deputy lord mayor Declan Clausen.