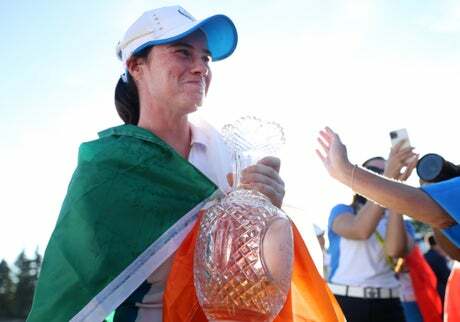 Leona Maguire was left relishing the week of her life after proving Europe’s star turn in a 15-13 Solheim Cup victory over the United States in Toledo.

The star-studded American lineup were the overwhelming favourites to take the title but ended up losing on home soil for only the second time in the event’s history.

And it was the 26-year-old Irishwoman Maguire, on her cup debut, who ended up an unlikely hero with four-and-a-half points from her five matches.

She rounded off the week with a comprehensive 5&4 singles victory over Jennifer Kupcho, who had been unbeaten herself in the American team up until that point.

And Maguire, the first Irish player to feature in the Solheim Cup, said: “The goal was to get my point. That’s all I can do. I’ve given it my absolute all this week. I couldn’t have given it anything more. I mean I couldn’t have asked for a better week.”

The only time the European side had won on American soil, Catriona Matthew had sealed the winning point as a player, and this time captained Team Europe to what had seemed the unlikeliest of wins barely a few days ago.

Her European team got off to a strong start in the singles with some early wins but the Americans hit back to set up a tense finale to the event before Europe again turned the tide to their advantage.

Following back-to-back wins as skipper, Matthew said she wouldn’t be returning to the role in Spain in 2023.

“Two and done,” she said. “At Gleneagles, the way it finished and being in front of my home crowd was very special. This time, winning on American soil wasn’t easy. And especially this year with Covid and Europeans not being able to travel made it even sweeter.

“I was lucky enough to play in nine and I’ve captained two and I’ve had a fantastic time. It’s the best week I’ve had every two years and to have been involved with it now for over 20 years I’m sure I’ll be there watching but it’s someone else’s turn.”