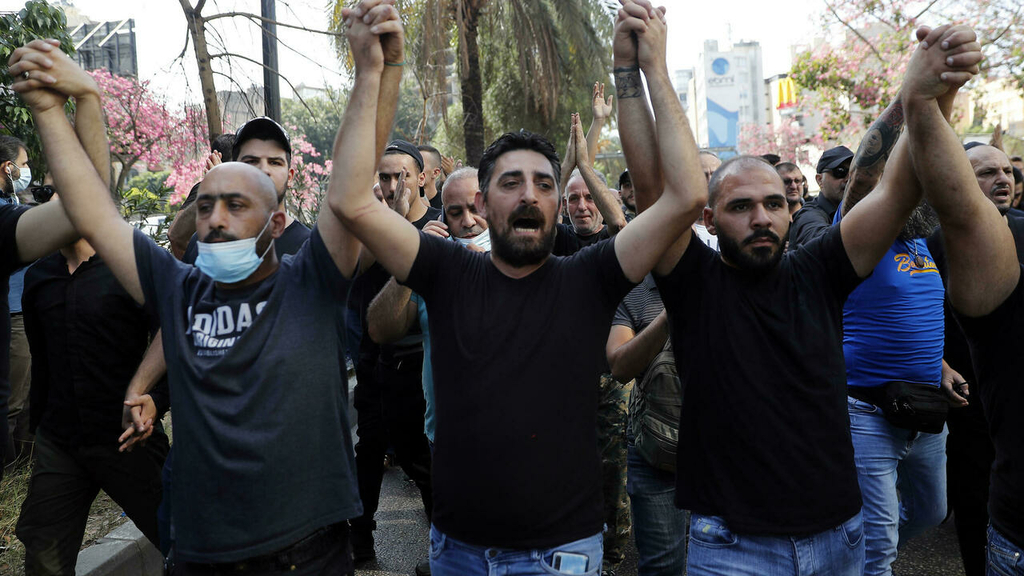 Gunfire killed at least one person in Beirut on Thursday as supporters of the Shiite group Hezbollah and its allies gathered in the Lebanese capital to protest against the judge investigating last year's catastrophic port explosion.

People ran for cover as shots and ambulance sirens could be heard in a live broadcast by Lebanon's al-Jadeed TV. One person was killed by a shot to the head and eight others were injured, three of them in critical condition, a hospital source told AFP.

It was not immediately clear what triggered the gunfire, but tensions were high along a former civil war front-line between Muslim Shiite and Christian areas of Beirut.

The army deployed heavily and sent patrols to the area to search for the gunmen. In a statement, Prime Minister Najib Mikati appealed for calm and urged people “not to be dragged into civil strife.”

A court earlier on Thursday dismissed a legal complaint against Judge Tarek Bitar, allowing him to resume his investigation into the August explosion, which killed more than 200 people and devastated swathes of the capital.

Bitar, a target of a political campaign led by the Shiite movements Hezbollah and Amal, was forced to suspend his probe for a second time in less than a month on Tuesday over lawsuits filed by former ministers he had summoned on suspicion of criminal negligence.

The suspension coincided with deep divisions within the government over whether to replace the controversial investigator, who is seen as a last hope for justice by many Lebanese but is condemned as biased by political leaders.

On Thursday, the Court of Cassation turned down a lawsuit filed by two ex-ministers demanding a replacement, a court official told AFP on the condition of anonymity.

"Bitar does not fall under the court's jurisdiction so it does not have the authority to consider requests for his dismissal," the official said.

It is the second time this month that the judiciary has ruled in favour of Bitar, who is hailed by human rights groups and relatives of blast victims as a symbol of judicial independence in a country where political impunity has long been the norm.

But the investigator's fate is all but clear as Hezbollah and Amal press ahead with a campaign aimed at removing him.

Thursday's protest in the Lebanese capital followed a speech on Monday by Hezbollah chief Hasan Nasrallah who called for an "honest" judge to replace Bitar.

Ali Hasan Khalil, a senior Amal movement lawmaker, threatened a "political escalation" if the course of the investigation "was not rectified" after Bitar on Tuesday issued an arrest warrant against him for failing to show up for questioning.

The August 4 monster blast of hundreds of tonnes of ammonium nitrate fertiliser at a port warehouse caused one of the largest non-nuclear explosions in history.

The shockwave was felt as far away as Cyprus, entire swathes of Beirut were devastated, at least 215 people were killed and thousands wounded, some of them several kilometres from the blast site.

Lebanese authorities have repeatedly rejected an international investigation while also hampering a local probe that has yet to identify a single culprit.