Kravis’ Wedding Is Embroiled In Multiple Scandals, From ‘Disrespect’ To ~Rumoured~ Sponcon

The post Kravis’ Wedding Is Embroiled In Multiple Scandals, From ‘Disrespect’ To ~Rumoured~ Sponcon appeared first on PEDESTRIAN.TV .

. And no, I’m not talking about (although that was certainly a Kravisty in its own way). First up, you may have noticed that a recurring theme at their nuptials was Dolce & Gabbana as the whole thing was held at Villa Olivetta, which is owned by the disgraced fash label. D&G also dressed absolutely everyone from the bride and groom to the Kardashian-Jenner fam, including , , , and momager , plus Kourtney and Travis’ kiddies. Even the boats that ferried guests to the event were adorned in the fashion house’s signature prints. Folks were eye-rolling hard over the fact that the wedding appeared to be just a huge fkn ad for Dolce & Gabbana, but the brand denied this theory. “The designers were happy to host this very special occasion,” a rep for Dolce & Gabbana told . With that said, the wedding has already earned the company a whopping AUD$35.7 million in media impact value, according to brand performance firm Launchmetrics. “Media impact value is how we assign a monetary value to brand performance. It calculates the value of every post, every interaction, every article,” Launchmetrics CMO told Page Six. “It’s a crazy amount of media impact value!” Whether or not the wedding was sponcon or not isn’t even the biggest issue. The worst part is that they couldn’t have chosen a worse fucking brand to splash across their big day. Dolce & Gabanna have a history of racism, sexism, homophobia and fatphobia, which . So the fact that Kourtney and Travis opted for these jackasses to style their entire wedding is beyond disappointing. It’s fucked up and downright disturbing. Not only that, but people were offended by Kourtney’s attire, with some saying that the couple’s wedding was a “mockery” of the Catholic faith. “Kinda weird that Kourtney’s wedding is like this catholic ‘aesthetic’ like the Virgin Mary on her dress and her wedding veil ??” one person wrote on Twitter. “I just really feel like Travis & Kourtney’s wedding is mocking the Catholic religion?” wrote another person. “They don’t symbolise religious people at all, just feels like mockery. I’m not catholic but just doesn’t sit right with me.” A third commenter wrote: “I’m just going to say it point blank. Kourtney Kardashian’s use of the Blessed Mother in her outfit(s) during her wedding weekend was extremely offensive to me as a Catholic … I have a right to feel offended by it.” Neither Kourtney nor Travis have yet to comment on the backlash that has ensued.
Sign up to read this article 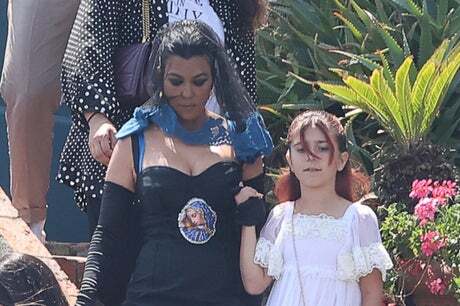 The Kardashian-Jenners’ long-standing love-in with Dolce & Gabbana
And the bride wore... nothing but Dolce & Gabbana. As Kourtney and Travis Barker tie the knot during brand-sponsored nuptials…