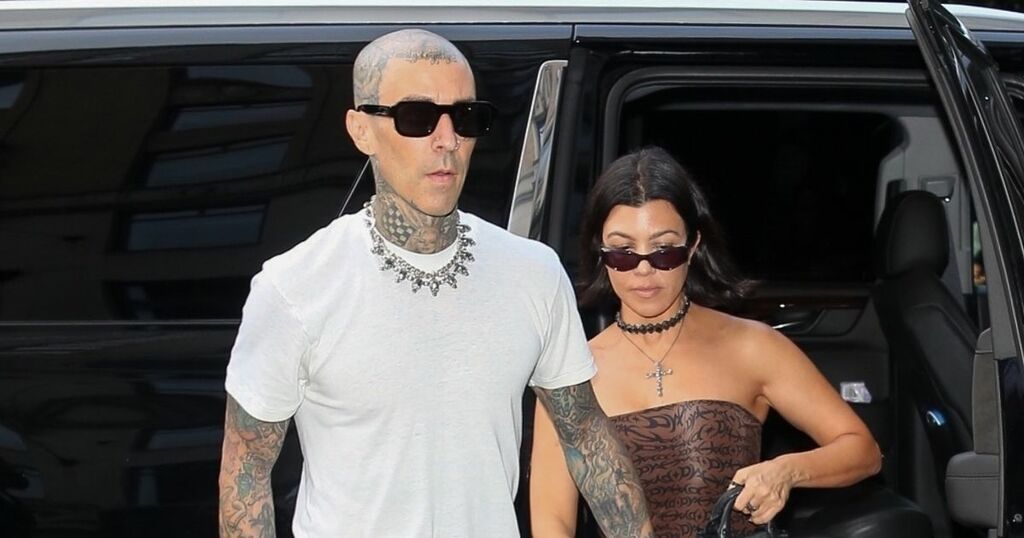 Kourtney Kardashian and her boyfriend Travis Barker skipped the star-spangled glitz of the Met Gala for a romantic date night.

The Keeping Up In The Kardashians star, 42, was seen heading to the Ritz-Carlton Hotel in New York City with the Blink-182 rocker.

She gave 2000s vibes with her black wide-legged trousers and black boots as she headed hand-in-hand into the hotel with Travis.

Travis, on the other hand, kept it casual with a white t-shirt, black trousers, and Dr. Martens boots.

When the couple left the hotel hours later, Kourtney covered up in a black DTP Records hoodie.

Travis swapped his white t-shirt for a black graphic one.

Kim, Kendall, Kris and Kylie are the usual ones from the KarJenner clan that turn heads at the Met Gala.

Kim and Kris were the only ones to grace the Met Gala this year, with Kim showing up in a surprising outfit.

Her black ensemble covered her entire body and her face.

She was seen posing alongside a man in matching attire, and fans had originally thought it was her estranged husband Kanye West.

But the man was actually Balenciaga creative director Demna Gvasalia.

Kim arrived at the Met Gala in a custom outfit designed by Demna, which incorporated a bodysuit with a black curve T-shirt under a T-shirt dress.

She added jersey boots Pantaleggings and a mask that covered her entire face in one of the boldest looks on a night full of glamour and sparkle.

While Kanye skipped the famous red carpet, it's said that the wild look was all his idea.

TMZ reported that the rapper was the driving force behind the look and that it was he who "gave Kim the courage to push the envelope with creativity and people's imagination through art."

Just hours before the event, Kylie - who is pregnant with her second child with Travis Scott - announced she wasn't going to attend the Met Gala.

Taking to her Instagram Stories, she shared all her throwback looks from previous years.

"I’m so sad I couldn’t make it this year. I can’t wait to see all the looks," she wrote after sharing her iconic outfits.