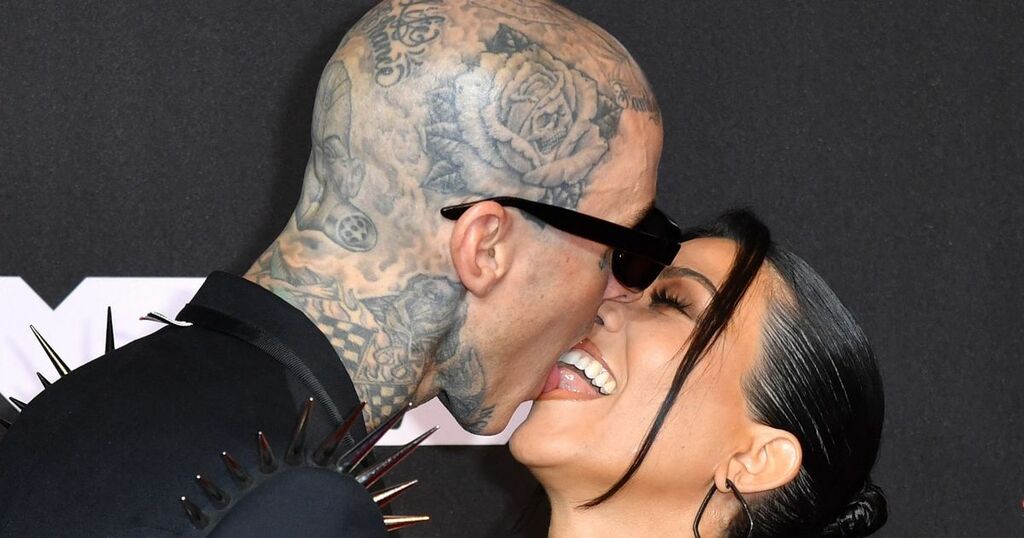 Kourtney Kardashian and Travis Barker don't need an excuse to be all over each other.

The loved-up pair were at it again on Sunday night as they got close on the red carpet of the MTV Video Music Awards.

The huge event taking place at the Barclays Centre in Brooklyn, New York, was awash with stars entering via the red carpet.

And 42-year-old Kourtney and her drummer boy beau, 45, looked their usual happy selves as they posed for pictures.

The pair puckered up and shared a few laughs as cameras pointed in their direction.

The heavily tattooed Blink-182 star wore a black blazer with no top underneath, showcasing his body art. He also wore black ripped trousers and topped off his usual look with a pair of thick black sunglasses.

The Keeping Up With The Kardashians star beamed as she wore a short and shiny black dress. The strapless mini-skirt number with long sleeves was laced at the front from her cleavage to her belly button.

She carried a clutch bag as the duo shared the moment together.

Their appearance comes after they confessed that Travis has flown five times in the last month.

The musician had originally vowed to never fly again after her survived a horror crash which killed four others.

The crash happened in September 2008, and the musician was one of only two people to survive a horror crash. His security guard Charles 'Che' Still, and his assistant Chris Baker were among those to lose their life.

The small plane was attempting to take off when a tyre suffered a blowout which caused the craft to overshoot the runway before crashing through a fence.

After the craft burst into flames, pilot Sarah Lemmon and co-pilot James Bland were said to have died within minutes from smoke inhalation and burns.

Che and Chris were also killed on impact, while Travis and Adam 'DJ AM' Goldstein were able to escape the wreckage via an emergency exit over the wing.

Travis was left with burns covering extensive areas of his body.

However, he has now thanked his partner for the role she has played in helping him overcome his fears - which certainly seem to now be a thing of the past.